The Home Stretch Is Crowded

Modi has been promised a big role for the 2014 polls but will he get what he wants? 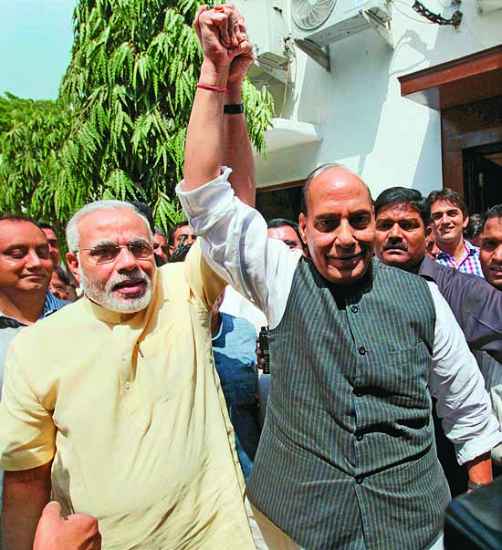 If all goes as scripted, when the BJP’s national executive meeting in Goa ends, Gujarat chief minister Narendra Modi may come to head the party’s campaign committee for next year’s Lok Sabha elections. That will also put him in a better position to demand that he be made the party’s prime ministerial candidate. Sources confirmed to Outlook that party chief Rajnath Singh even offered to announce at the office-bearers’ meeting scheduled for June 7 that Modi will spearhead the election campaign.

According to insiders, it took Rajnath several days of work to build a consensus on elevating Modi. In informal meetings with office-bearers, Rajnath had proposed Modi’s name, only to run into opposition from some seniors. By June 5, however, Modi had totted up enough support. Two things helped: the BJP’s clean sweep of the byelections in Gujarat and also the JD(U) losing the Maharajganj byelection in Bihar, where NDA partner and Modi rival Nitish Kumar is chief minister. The blow to Nitish seemed the perfect retort to those who kept raising the Nitish flag to prevent Modi’s elevation. When Modi drove up to Rajnath’s residence on Ashoka Road, Delhi, he arrived like a hero, to the beating of drums and distribution of sweets. But the scene inside was nervy. Source say Modi asked Raj­nath not to play “parallel politics to undermine my stature”. The reference was to L.K. Advani’s caveat of a few hours ago: the veteran leader, once Modi’s mentor, had told Rajnath just a few hours ago that if Modi were put in charge of the Lok Sabha campaign, another campaign committee for the 2013 assembly elections should be set up, headed by another leader. Both committees, Advani had demanded, should be announced together. By the day’s end, support for Modi poured in—leaders like Arun Jaitley praised Modi’s role in the Gujarat byelection—and Rajnath had made up his mind. The Rajnath-Modi meeting was only meant to suss out that the appointment would happen; an announcement was to be made at the Goa executive meeting.