Home  »  Magazine  »  International  » Flashpoint »  The Hint Of A Forked Tongue

The Hint Of A Forked Tongue 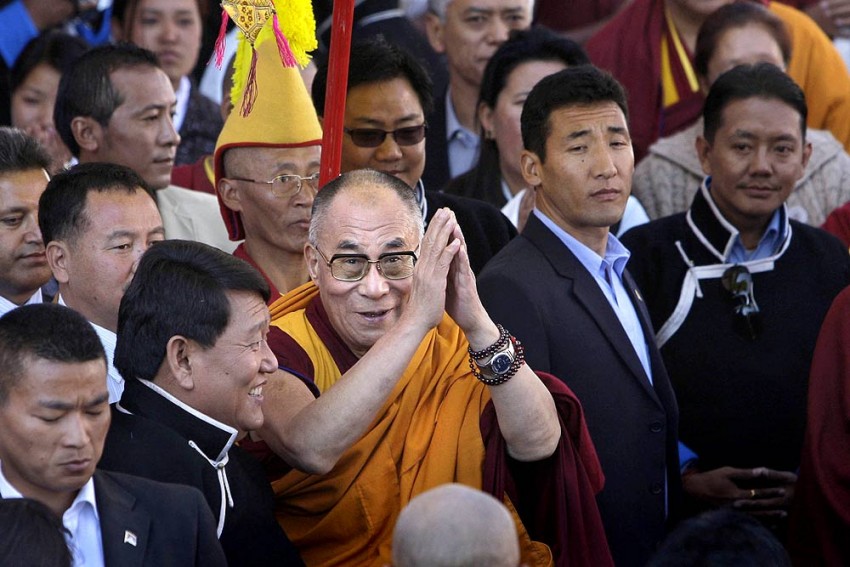 Focal Point
The Dalai Lama arrives at the Tawang monastery in Arunachal Pradesh in 2009
Photograph by AP
Pranay Sharma March 09, 2017 00:00 IST The Hint Of A Forked Tongue 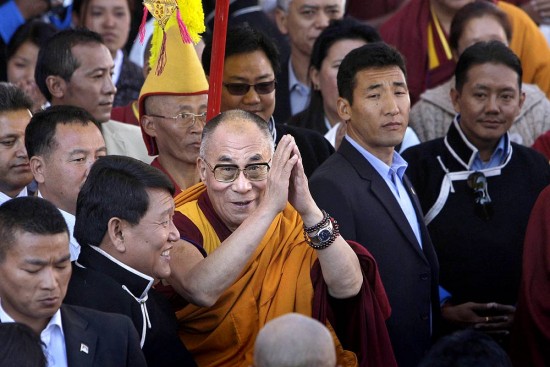 The Communist Party of China has mostly remained unimpressed by what it sees as the hoopla surrounding Tenzin Gyatso—the 14th Dalai Lama—for nearly six decades.

A much revered religious leader in India and the West, the Dalai Lama counts among his admirers Hollywood stars, TV talk show hosts, royalty, leading political figures of key nations as well as ordinary Tibetans and people from other creeds. He was awarded the Nobel Peace Prize in 1989 for highlighting the Tibetan cause through peaceful means and reconciliation.

Every year, large numbers of people travel to his residence in Dharamshala for an audience or simply to seek his blessings. When visiting abroad, his events get top media billing; auditoriums where he speaks usually spill over with people. Even some Chinese from the mainland, who have had the rare opportunity to meet him, cannot help but talk about his charisma.

But the world’s adulation for the Dalai Lama has left unmoved the Communist leaders in Beijing, who continue to watch his every step with suspicion and regard him as a “splittist”, a “wolf in a monk’s robe”—more of a wily politician than a spiritual leader.

Ever since the Dalai Lama and his followers fled Lhasa in 1959 to take shelter in India and subsequently set up the Tibetan government-in-exile in Dha­ramshala, China has been implacably hostile towards the pontiff. However, over the past weeks, the acerbic exch­ange of words has got sharper. In a recent int­erview with American TV show host John Oliver, the Dalai Lama described Chinese hardliners as people who have some essential parts of their brain missing. Beijing responded pro­mptly, des­cribing him not only as som­e­one who encourages anti-China sep­­aratists but also as a “deceptive” actor.

Observers feel Beijing’s reaction stems from the growing nervousness among the Chinese establishment over the proposed April 4-13 visit of the Dalai Lama to Tawang in Arunachal Pradesh.

That the Chinese focus is now firmly on Tawang became clear from the rem­arks of its former chief negotiator for boundary talks, Dai Bingguo, who said in an interview to the Chinese media last week that a possible settlement of the boundary was possible if India conceded Tawang to China, which in turn will allow the latter to show acc­ommodation in the western sector, perhaps in Aksai Chin.

“What Dai Bingguo has stated has been China’s formal position at least since the mid-1980s,” says former foreign secretary Shyam Saran. According to him, it was around then that China formally shifted its stance from its earlier so-called “package proposal”, which would have settled the boundary on the basis of “as is and where is”—repeated thus by Chinese leader Deng Xiaoping in 1982 to the former Indian ambassador to China, G. Parthasarathi. A reiteration of the formal Chinese position on the border issue, Saran says, should not be regarded as significant, since there is no substantive shift by Dai, neither a hardening nor softening of Beijing’s stand.

“However, the timing of the interview could be related to the news that the Dalai Lama will soon be visiting the historic Tawang monastery and offering prayers there,” adds Saran.

Somewhat ominously, Beijing’s rec­ent remarks have not only been against the Dalai Lama, but also less obliquely against New Delhi—the Chinese fore­ign ministry and a host of their commentators have been cautioning India against allowing the Tibetan leader’s visit to Tawang, as it would seriously damage future Sino-Indian relations.

But Saran points out that despite Chinese opposition, India cannot prevent the Dalai Lama from visiting Arunachal Pradesh, since it is reg­arded as an integral part of nat­ional territory, just like UP or Karnataka is. “Preventing him from going to Tawang, but not to any other part of India, would be acknowledging that the status of Arunachal Pradesh is indeed different from other parts of India,” says Saran, adding that China needs to understand this rat­­ionale behind India’s acceptance of the Dalai Lama’s visit to Tawang.

Yet, the Dalai Lama has been to Tawang before, in 2009. So why is China cooking up this fuss? Ind­eed, what explains its emphasis on India ceding Tawang as part of the boundary settlement? During ear­lier negotiations, the Beijing leadership had accepted New Delhi’s arg­­ument that areas along the boundary that have settled population cannot be part of the negotiation.

“It is true that in concluding the ‘Political Parameters’ and ‘Guiding Principles’ for the settlement of bou­ndary issue in April 2005, China acc­epted the principle that settled pop­ulations would be a factor in determining the boundary alignment. Both sides were fully aware that this referred to Tawang, since it is the only border area with a significant settled population,” says Saran. However, he points out that “since then, China has tried to walk back from the principle in the border negotiations, but this predates the Modi government”. 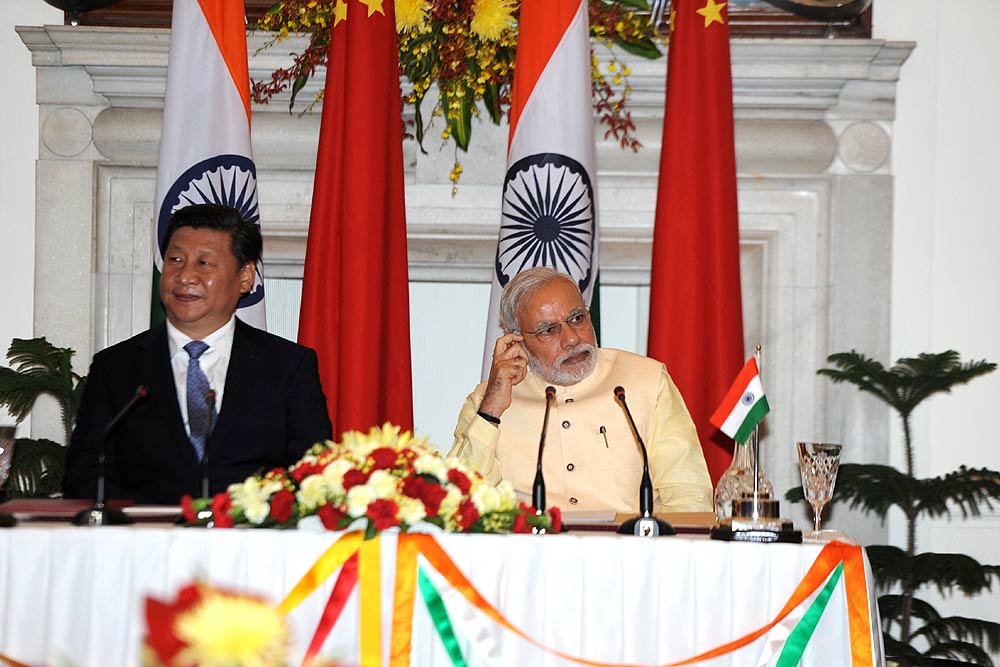 So the question remains—why are the Chinese going back on what they had agreed on earlier?

“The Chinese position has been gradually hardening since 2007,” says senior fellow at Delhi’s Centre for Policy Research, Srinath Raghavan. He points out that it all began as an attempt to reg­ain some of the ground the Chinese had apparently conceded in the 2005 agreement on the matter of “settled populations” etc. “That agreement hap­p­e­ned in a context where the Chinese bel­­ieved they could entice India to a strategic partnership. After the Indo-US nuclear deal, their position began to har­­den. There was also the context of unr­­est in Tibet ahead of the Beijing 2008 Oly­mpics,” says Raghavan. He adds, “And Tibet is always an important factor in their thinking about the boundary.”

What importance, though, has Taw­ang for China? China claims Arunachal Pradesh by arguing that there had been  historical ties bet­ween the Tawang monastery and Lhasa. Since Tibet is part of China, so should Arunachal Pra­desh, or, more precisely, Tawang. But experts also point to its strategic imp­ortance to Chinese policy planners.

China’s stand is a reaction to burgeoning India-US ties; it also stems from a perception of its greater power, says Saran.

“Aksai Chin is far less important to China today, with the Lhasa railway and the Tibetan road system being put in place, than it was in 1962,” says professor of international affairs at the Georgia University of Technology, John Garver. “On the other hand, a southern-extending salient around Tawang to Bhutan’s east would place Bhutan, India’s protectorate, between the Chumbi Valley to the west and Tawang salient to the east, thus adding difficulties to India’s ability to defend its Northeast,” says Garver.

He adds, “Could be the message from China is: don’t expect a sweetheart deal from us. It’s you, India, who is in a bind, and who needs to be nice to us, accommodate us. You better think about it.”

“There are a couple of things at work here,” says Raghavan. “First, the Chi­nese have taken a tough line on mar­itime disputes. The assertiveness on our boundary is part of a larger trend in its policy. Second, the Chinese are watching India’s ties not just with the US but also Japan, Australia, Vietnam, Indonesia etc. As India joins countervailing coalitions, there will be a pushback from the Chinese.”

But Garver doubts if India can rely on the US under the Trump administration in the same way it did with Bush and Obama. “India has gone a considerable distance down the road of partnership with the US, much to Beijing’s dismay. Now, India finds a radically unorthodox US administration, perhaps leaving it out on a limb.”

Saran, however, argues that the tough Chinese stand stems not from close US-India ties but with its own perception that today it is a much stronger economic and military power than India. He feels the only way India can deal with an assertive China is by building stronger relations with the US and with countries like Japan, South Korea, Australia and Southeast Asian nations. “India will find itself more vulnerable to Chinese pressure if its network of relationships with other major and emerging powers were to weaken,” says Saran.

As the debate among experts rages on the best way to deal with an assertive China, one thing is perhaps clear—an armed conflict between the two Asian neighbours, with unpredictable consequences, is not in the interest of either side. Hopefuly, that would also be the sobering conclusion of the leadership in the two countries. Only then would they summon all the power in their disposal to avoid a situation that could throw the entire region into instability at best, and a ruinous future at worst.