The Hillbillies Have Arrived 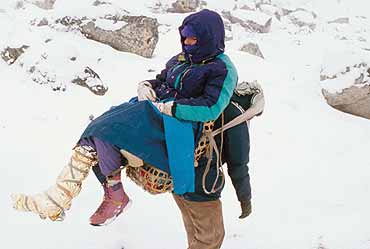 Until 1950, no Westerner had explored the homeland of the Sherpas on Everest's southern side in Nepal, and yet they were already famous. The story of how this Tibetan tribe of a few thousands came to be the most famous mountain people is remarkable in the history of exploration.

Till the 19th century, the Sherpas—the word translates as 'easterner' in Tibetan—were an obscure hill tribe struggling to cope. Then three things happened, all of which connected to make Tenzing and the Sherpas international mountain stars. First, Sherpas won a monopoly on trade across their stretch of border with Tibet from the government in Kathmandu. They developed traders' skills: cultural flexibility, empathy and a friendly approach towards strangers. They also became wealthier.

Next, someone had the brilliant idea of planting potatoes, possibly donated from the British resident's garden in Kathmandu. For the first time the Sherpas had a food sufficiently calorific for the population to grow.

Finally, in the early 1850s, the peak that the Sherpas called Chomolungma was...