The Hellish Fury Of A Man Spurned

New laws seek to curb an epidemic of gender violence, as acid attacks on girls show an alarming upward graph despite the death penalty 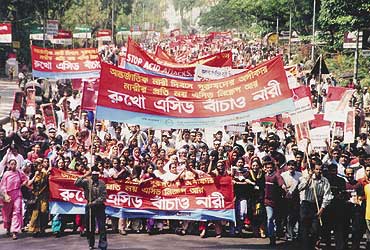 "I find such attacks revolting," said Habibur Rahman, former Bangladesh chief justice, who was present at the rally. "This is our national shame." Bewildered at the callousness of the assailants who resort to such heinous crime, Kumar Biswajeet, a popular singer, lamented: "My heart bleeds when I look at the unfortunate girls."

The scale of the crime is so huge, the law too is taking a second look. The rally was organised in the backdrop of Bangladesh Parliament passing the Restriction of Acid Sale Bill to regulate the retailing of the 'deadly liquid'. Parliament also passed on Wednesday night (March 13) the Prevention of Acid Violence Bill, 2002, which mandates that an acid attack case must be decided within 90 days. That these legal measures are needed sorely was underlined at the rally, devastated as the participants were at the sight of the horribly disfigured and scarred faces of the 100 young women.