The Heart Has Two Chambers

It was to be a surgical kill. But Dr Trehan wasn't easy game. Updates 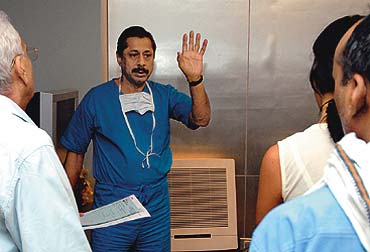 outlookindia.com
-0001-11-30T00:00:00+0553
What happens when the man who has helped make the Escorts Heart Institute and Research Centre the renowned institute it is today is told he is not needed any more? Utter chaos ensued among patients and the medical community alike when news broke that the Escorts management, Fortis Healthcare, had ousted renowned cardiologist and part shareholder Dr Naresh Trehan.

Many had travelled long distances—one from Dhaka—to be operated by him. Among them was Manoj Prakash, who had been running from pillar to post with his mother Usha Kiran to get his father Ravi Prakash admitted. "We have come from Saharanpur and have already paid Rs 25,000 in advance," he told this correspondent, ready to break into tears any moment. "We had come to admit my father today. Now they are refusing to admit him under Dr Trehan, saying he is not here any more. My father has a blockage and one of the valves is not working at all. I wish I had the time to take the money back and take him to another hospital."

It was the plight of the patients that made the Delhi High Court step in on May 24 and ask both parties to try and settle the issue out of court. At the time of going to press, a formula was still being worked out. And in case a compromise isn't reached, the court has fixed May 29 as the date for the next hearing.

Matters came to a head the day Trehan was summarily told that his services had been terminated. On May 18, after a hard day's work, Trehan emerged out of the operation theatre at 6 pm to find a letter from the management waiting for him. With this single stroke, it sought to end Trehan's 25-year-long association with the hospital he had helped build.

Trouble, however, had been simmering below the surface: the genesis being Trehan's Rs 1,200-crore super speciality Medicity project in Gurgaon outside Delhi on which he had been working on since May 2005. Fortis Healthcare, which took over the same year in September, perceived this as going against the interests of Escorts. It initially tried to tie up with Dr Trehan on the project. When that did not materialise, it offered the cardiologist three options—get into a partnership with Fortis to prevent a clash of interests; give up the Medicity project altogether; or quit Escorts. 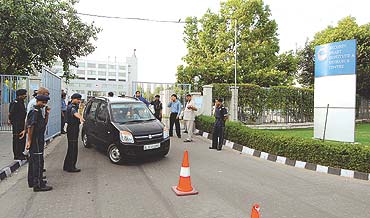 Trehan stood his ground on the first two, forcing Fortis Healthcare to act on the third alternative. However, the way it went about it ended up drumming more support for the doctor than effect any dent in his image. Not only was Trehan sacked summarily, two of his trusted secretaries were thrown out of the hospital premises and another three women staffers were confined to a room, guarded by security personnel. The management even requisitioned the services of 300 security personnel and policemen. These included CRPF personnel—usually called in case of disasters or riotous situations—the local police and even the Delhi Armed Police. Vehicles were stopped at the main entrance and subjected to security checks.

"It was all done simultaneously," says an insider. "Fortis MD Shivinder Mohan Singh informed senior doctors and management personnel via e-mail that Dr Trehan's services had been terminated. The management did not realise the import and folly of what it had done. It did not contend with the fallout." Not only was there mayhem among Trehan's patients, the unwarranted security too did not go unnoticed. Delhi Lieutenant Governor Tejinder Khanna was summoned by both Sonia Gandhi and home minister Shivraj Patil to explain the deployment of security forces.

But there was more damage the management had done to itself. It went on to issue advertisements in national dailies trying to dissociate the doctor from the hospital. From saying that "the hospital was not anyone's fiefdom", it even alleged that Trehan personally conducted "very few surgeries". This strategy didn't work either.

Trehan himself took a philosophical view of the situation. He continued to work through the court and corporate battles, having conducted three surgeries even on May 24. "There is individual kismet," he said, "community kismet and the country's kismet. It is our country's bad fortune to be saddled with such problems when the focus should be on patients and healthcare," he told Outlook. In fact, it was the plight of the patients that Trehan said was affecting him the most. "I've given my last 25 years, my body and soul to this institute. We built it brick by brick. Only we know how we arranged the money, begged for it. I couldn't be there for my daughter's delivery, even missed her birthday party. We doctors have to be so dedicated. The management doesn't realise this."

Trehan described the entire drama to be as painful as divorce proceedings. "It is like a fight over a child's custody," he said. "Escorts is like my child. I am not giving up on it just like that."

On his part, Fortis MD Shivinder Mohan Singh maintained that "conflict of interest" remained the management's main quarrel with Trehan. That the latter should focus on a personal project was something the management could not brook. An MBA in healthcare management from Duke University in the US, Singh said he had highest regard for Dr Trehan as a surgeon. "However, we do believe strongly that the institution is larger than any individual, no matter how great the individual be," he said.

Fortis Healthcare president Daljit Singh cited the example of Dr Devi Shetty, another renowned cardiologist, who had walked out of Manipal Foundation with several doctors to start his own institute in 2000. "The Manipal Foundation is still struggling from the impact. We did not want the same to happen to Escorts because Dr Trehan would have done the same with Medicity." But wouldn't sacking Trehan in fact help him do precisely that?