The Hand Of Gowda

A smart spokesperson, does his master's homework too 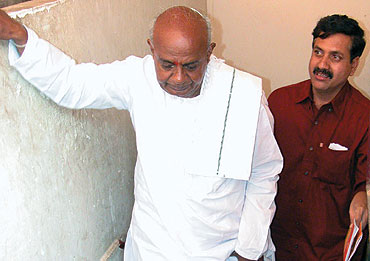 outlookindia.com
-0001-11-30T00:00:00+0553
He was originally part of a trio that hung around Deve Gowda’s house. But while its non-Brahmin members, B.L. Shankar and V. Somanna, moved on, Datta stayed loyal to the Gowda family and has been their trusted lieutenant for more than two decades now.

It is Datta who’s fielded the toughest questions from the media whenever there’s been a crisis in the party. But he’s not just a smart spokesperson. It is said in political circles that the pile of material Gowda uses against his opponents in public or private, are either compiled, arranged or drafted by Datta. The proximity to power hasn’t gone to Datta’s head. He moves around in an autorickshaw. For his loyalty, he was given an MLC position recently.