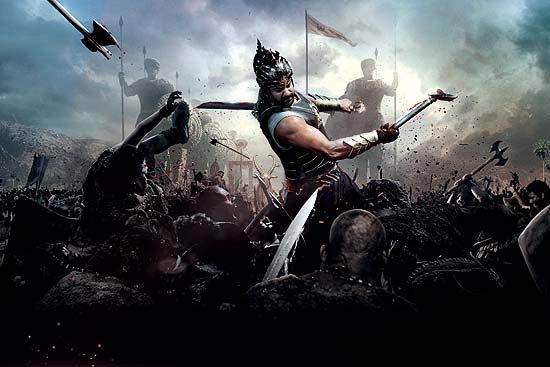 In September 2001, a podgy NTR Junior made his debut in an unusual film called Student No. 1. His natural style, powerful dialogue delivery and startling resemblance to his grandfather Nandamuri Taraka Rama Rao rendered him an overnight star. The story of a murderer who comes to study law and shows other wayward students the right path set the box office on fire. At that point, film-goe­rs looked twice at a circular emblem on the posters that declared: ‘An S.S. Rajamouli Film’. In the years since, the director has delivered nine back-to-back blockbusters in a row—and his latest offering, Baahubali, an ambitious period war drama, looks all set to become a super-duper hit.

Koduri Srisailla Sri Rajamouli started out with the popular TV serial Shantini­vasam on ETV. In cinema, he cut his teeth under the renowned filmmaker K. Raghavendra Rao, who says he was ama­zed by the pani rakshashudu (workaholic), who put in 18-hour days for a soap opera. “Even there,” recalls Ragha­vendra Rao, “despite limited resources, he was constantly pushing the envelope.”

This is the reason Raghavendra Rao, who wrote the screenplay for Student No. 1, is presenting the Rs 200-crore Baahubali, India’s costliest film so far. It’s a fiction set around 500 AD, and inspired by Rajamouli’s childhood addiction—Amar Chitra Katha comics—and is about Bhallaladeva (played by Rana Daggubati), tyrant-king of Mahes­h­mati, and his clash with Baahubali (played by Prabhas), a tribal warrior. Anushka Shetty plays Devasena, Tamm­anah plays Avanthika and Ramya Krishna plays Shivagami, the Rajmata.All women have sword-wielding roles.

Says producer Shobu Yarlagadda, son-in-law of Raghavendra Rao, “The teaser shows that Baahubali is made on a large canvas—it has kings, queens, courts, ministers, palaces, politics and the magic of VFX.” Like Rajamouli, he too is mild-mannered and grounded—and has shared the Baahubali dream for years. “It’s not just a world I’ve been dreaming of, but one I’ve been living in and building brick by brick for three years,” Rajamouli said at a press meet in Mumbai. And Karan Johar, whose Dharma Productions is presenting the film in Bollywood, said, “There cannot be another war film like Baahubali in India because there’s only one Rajamouli. His strength lies in blending technology with emotion.” 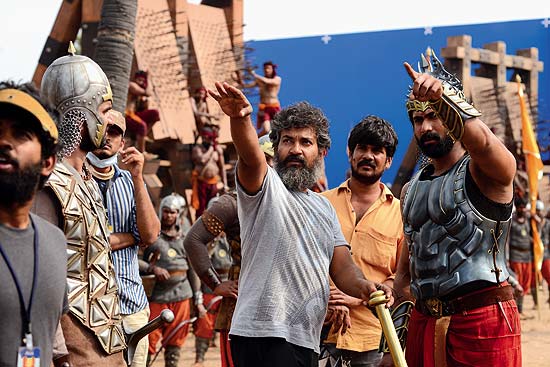 Director Rajamouli (in T-shirt) is a stickler for detail. But he’s patient with stars and crew,
who say he’s easy to work with.

Indeed, Rajamouli’s films might revel in blood and gore but he always tunes in to the heartstrings, and takes chances established directors usually shun. In his third film Sye, rugby was the backdrop to a fight between college kids and the real estate mafia. He hired an Iranian rugby coach, who trained the artistes for two months. Sye wove an athletic spell with bloodied faces and sweaty bodies that worked with audiences that generally never looked past cricket. In Mary­aada Ramanna, Rajamouli had comedian Sunil take the main role. “I cho­ose actors by the script. NTR Jr was annoyed when I didn’t cast him after Student No. 1 and Simhadri. But I explained that his image wouldn’t suit Sye.”

Rajamouli’s father K.V. Vijeyandra Prasad is a screenwriter, but they have seen tough times—the family of 13 used to live in a two-bedroom house in Chennai and run up debts with the local grocer. He recounts being rudely asked to wait by the shopkeeper. “I was stunned and learnt the humiliation of running up debts,” he says. Money troubles compelled him to complete his intermediate in two spells. But, he says, he never lacked in breaks—and once that happens, he works non-stop.

“I’ve never seen a director as single-minded and passionate as Rajamouli,” says producer Daggubati Suresh Babu, actor Rana’s father. “When I saw his Eega, I was fascinated. Even then, I saw in him a desire to improve and learn.  Directors in the Telugu industry are more focused on business. Not Rajamouli, who is willing to sacrifice his remuneration for a film. That’s a rare quality.”

Actors swear by Rajamouli’s work ethic. Says Anushka Shetty, heroine of Baahubali, “He pays great attention to detail—the emotion on a face, the colour of the curtain in the background, the way it’s blowing in the wind. He’s involved in all aspects of film-making and this intensity shows on screen. People assume direc­tors are moody, but there’s nothing like that with Rajamouli. If someone is not getting it right, he’ll explain it a hun­dred times, each time with more patience.” Another thing actors note is how Rajamouli’s family is always around, attending to things, pampering actors. In fact, even the kids may be around, during the shoot and for the first show. Rajamouli’s wife Rama is a costume desi­gner, his cousin M.M. Keeravani (M.M. Kreem in Bollywood) is a music director. Besides, his father, his cousins S.S. Naaga, S.S. Kanchi and Kaly­ani Malik, all participate in developing a film.

Rama was a divorcee with a son when Rajamouli began courting her. “She is my backbone, she makes me stand, walk and helps me get rid of creative blocks. Everything I have achieved is because of her,” he says.

Says Shobu, “I think he’s one of the few directors who has matured. He is very detail-oriented and passionate, to the extent he can set aside three years for Baahubali.” Rajamouli spent a year develo­ping the world of Baahubali before beginning to shoot—every character and location has a background, and he drew up political and military hierarchies, social taboos, trade, army, occupations.

Both Prabhas and Rana Daggubati knew Baahubali would take two-three years, but did not hesitate. Prabhas, who has done Rajamouli’s Chhatrapati, says it was nevertheless a simple decision to be part of the director’s epic. And Rana Daggubati says, “You can imagine...if actors give call-sheets for two-three years to a movie, how amazing it must be to work with Rajamouli.... And I’m not even the hero. When Rajamouli narrated my role, I knew I had to play Bhallaladeva, come what may.”

The director’s total commitment is well-known. In Magadheera, Rajamouli rode horses, sword in hand, enacting each scene for Ram Charan Teja. The film remains the actor’s biggest hit. Perhaps the best comp­liment comes from actor Nani, after Eega: “He enacts every scene. He’s an amazing actor.” A large portion of Baahubali was shot in Ramoji Film City. “He was living in RFC. I don’t think he even knew about the bifurcation of Andhra Pradesh—he was that focused,” says Raghavendra Rao.

At just 41 years, Rajamouli is one of the few directors stars call up to ask if he has a role for them. Producers offered him Rs 10 crore in fees way back in 2010. In an industry where movies are completely star-oriented, Rajam­ouli has changed the formula by  never sticking to a formula. When Eega was being made, his detractors would snigger, “How can a fly be a hero?” But when Eega broke records, the same producers watched with green-eyed envy. Rajamouli has consistently denied copying Eega from the Australian short film Cockroach, but even if he did, the emotions in the fly seemed so human viewers forgave him.

His new film is completely different. “Baahubali is like an Avengers or Game of Thrones, where the viewer would be more involved in the film rather than the stars,” promises Shobu. About a decade ago, Rajamouli told this correspondent, “I want to make a movie like Braveheart, which has everything—love, patriotism, emotions, action.” Indeed, he appears close to fulfilling this ambition with the multilingual Baahubali, which might just be India’s answer to Hollywood’s big-budget, big-emotion sagas.

Another 'Cash For Vote' Scandal