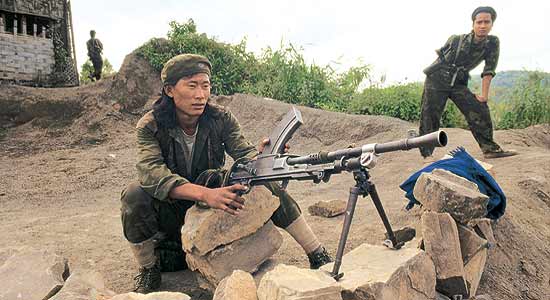 For decades, India and China have played a cat-and-mouse game, full of intrigue and suspense. Even while New Delhi is trying to find ways around vexatious border issues or making occasional noises about stapled visas, Beijing has been secretly supporting, advising and arming major insurgent outfits in India’s troubled Northeast and the Maoist belt. Unlike the noise and heat the Indo-Pak relationship generates, Indian diplomats maintain a studied silence when it comes to the Chinese hand in the Northeast or arms from across the border reaching Maoists in central India.

In the last three months, however, the Chinese hand in the Northeast has been revealed in great detail. In the early hours of October 2 last year, Indian intelligence officials, along with their counterparts in the National Investigation Agency, accosted a tall, hefty man waiting outside the Patna railway station. The quarry was Anthony Shimray, a key official of the National Socialist Council of Nagalim (Isak-Muivah) faction or NSCN(IM), the biggest insurgent outfit in the Northeast. Not only is Shimray a powerful member of the NSCN(IM)’s top leadership, he is also the nephew of its general secretary, T. Muivah, currently in New Delhi for peace talks with the Centre. As the chief arms procurer for the outfit, Shimray also has first-hand information on Chinese efforts to support...