How some unclaimed bodies finish their last journey with dignity, and why it's important to help 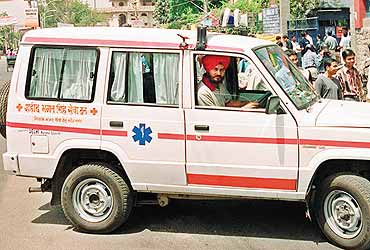 outlookindia.com
-0001-11-30T00:00:00+0553
He is our answer to the legendary Pakistani social worker Maulana Edhi. Like Edhi, he has chosen a trajectory of life where death stares him in the face every day. From one unknown human being to another. From one cremation ground to the next. Jitender Singh Shunty is a 42-year-old Sikh in Delhi who has taken upon himself to perform the last rites of those who have nobody in this world to cremate or bury them. Shunty moves to and fro, dispensing favours to those who can return none, not like a philanthropist do-gooder, but someone who thinks that a human being deserves the dignity due to him in the final journey from planet earth.

Shunty used to be a carefree man. He belonged to a well-off family which ran a thriving transport business. But something suddenly snapped inside him one day when he saw a man stealing wood from a burning pyre at Delhi’s Nigambodh Ghat cremation ground. Shocked, Shunty confronted him. Weeping uncontrollably, the middle-aged man said that he had lost his wife in an accident and didn’t have enough money to perform the last rituals. He had no choice but to steal wood. "I was stunned. I never knew this could happen to human beings in our society. Later, I came to know that there were people who often left a dead body unattended," recalls Shunty.

The incident changed Shunty’s life. He helped perform the cremation. And decided he just couldn’t go back home and forget everything. That is how, with two of his friends, he formed the Shaheed Bhagat Singh Sewa Dal about six years ago. Since then, the moment they get information about unclaimed bodies through police, friends, or resident welfare associations, they reach the spot and arrange the funeral. Many suicide victims’ bodies, whom nobody wants to claim, are given a burial or cremation by the Sewa Dal. Says C. Samuel, president of the East Delhi Malayalee Association, "The bodies of four men and two women were taken by Sewa Dal because their families couldn’t reach Delhi even after eight days. They always help in times of crisis."

So far they have performed the last rites of 550 unclaimed bodies. "The life and work of Maulana Edhi of Pakistan has inspired me," says Shunty. "And Bhagat Singh was a childhood idol."

The Sewa Dal provides free wood and other services at Geeta Colony, Hargobind Nagar, Kasturba Nagar, Seemapuri and Ghazipur cremation grounds to those who can’t pay for it. Of late, the organisation has also started providing free hearse van service. They have four vans, out of which two also operate as ambulances. "We are available 24 hours, all through the month," says Shunty. Sewa Dal signboards announce this fact across the river Yamuna.

It is not surprising that Shunty has himself performed the last rites of 150 unclaimed bodies. "Sometimes I become the father of some dead son, sometimes the son of some dead father," he says. Often, a Sewa Dal volunteer who’s a Hindu performs the last rites of an unclaimed Muslim body (and vice versa). In death, as in life, religion’s no barrier.

It’s not always the poor who require help. Often, even the rich call them. They recently arranged the funeral of an affluent woman whose children live in Germany. Her husband had requested Shunty to come and help. Two months ago, a doctor and his wife committed suicide in Jhilmil Colony in trans-Yamuna. No relative came forward. After getting the green signal from the police, the Sewa Dal performed the last rites.

They do not bank on the government or other organisations for financial help. Ordinary people donate. Shunty and his activist friends—Dr Jaiprakash Laldhagewale, S.K. Kapoor, Mohan Benjaiman, Nutan Kapoor and Dr N. Qureshi—often contribute from their own pockets so that work never stops, even for a day. If you ever come across an unclaimed body, with no one to perform the last rites, call Shunty at 22150680/22146921. Address: D-14/1, Bhagat Singh Market, Vivek Vihar, Delhi-110095.