'The Grameen Bank Won It'

'We (Bangladesh) have taken many things from the world, now we have given something to the world, a model to build a poverty-free society.' 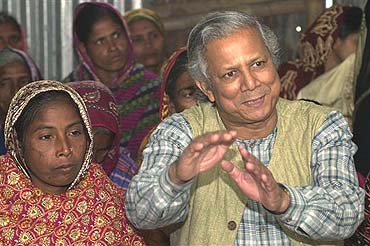 outlookindia.com
-0001-11-30T00:00:00+0553
When Bangladeshi economist Dr Muhammad Yunus, popularly known as the "banker to the poor", began to think of ways to change the financial status of the poor in the impoverished village of Jobra in Bangladesh, little did he or the villagers know that they would become pioneers of microcredit. Nor had the villagers then thought they’d get to hear the "unbelievable" news—the coveted Nobel Peace prize for Yunus. The Grameen Bank that he set up in 1976 shares the prize money. Yunus, 66, established through the Grameen Bank a new system of extending credit to the very poorest in Bangladesh, particularly women, without collateral, thereby enabling them to start up small businesses. And thus was invented microcredit. Today, the Grameen Bank serves 6.5 million borrowers, 96 per cent of them women. The Grameen Bank microcredit system has been replicated in more than 40 countries. Yunus spoke to Julfikar Ali Manik in Dhaka. Excerpts:

How did you come to know that you had won the Nobel Peace prize?
A Norwegian TV telephoned me and asked if I knew that the Nobel prize was to be announced that day. I said yes. But I told them I wasn’t monitoring it. I was told to be on the line as I could be the winner, though nothing was certain until the announcement. Over the telephone, I heard my name and the Grameen Bank in the Norwegian language. The caller congratulated me.

Did you expect the prize?
I didn’t expect the prize this year. Every year rumours (about my getting the award) circulate, but this year I did not hear any such rumour. So, I wasn’t really very hopeful.

Were you surprised at getting the Nobel for peace, instead of one for economics as has been rumoured?
I’m elated. It’s unbelievable. I told my family, and it was a different kind of joy. My father used tell me that one day I will get the Nobel; my thoughts went to my late parents. Another thought of mine was that everyone involved with the Grameen Bank as well as all Bangladeshis have won the award because they all supported my idea of microcredit to make it a success.

Is the prize appropriate for peace?
I was not astonished to get the Nobel prize for peace as economics and peace are interrelated—economics influences people’s life.

What will you do with the prize money?
I will not spend the prize money on myself. I will give the money to the bank and also start a new project on information technology to take the internet to remote villages of Bangladesh. We will also establish an eye hospital where even beggars will be given treatment at the cost of Tk 10-20. We will make yoghurt with all kinds of nutritious elements. We want to provide nutrition to the poor and children.

How did this microcredit programme start?
I was teaching at the Chittagong University at that time. I, along with some students, tried giving small loans to the villagers to free them from paying interest on money borrowed from the richer villagers. I wanted to break that vicious cycle in which the interest builds up and up and can result in the borrower losing everything. I started my experiment with some women of Jobra. I told them to return my money whenever they could. I found that they were good borrowers and with the money (advanced to them) they could change their life. The journey began thus.

What explains the success of micro-credit?
The Grameen Bank ensures proper monitoring of the loans it gives as well as advising borrowers to ensure that the money is properly utilised.

What’s your future plan?
Now I dream of Bangladesh becoming the first country to be free from hunger. Hunger is one of the main reasons of anarchy. If poverty can be reduced from society, peace will prevail on the earth. My dream is to build Bangladesh into a prosperous and poverty-free nation. The aim of our microcredit mission is to slowly, but steadily, bring each and every single poor of the nation out of poverty and enable them to lead a normal life. We want to build a Bangladesh where some day the existence of poor people will be a matter of history or anthropological antiques of a museum.

How do you see your work after this honour?
We (Bangladesh) have taken many things from the world, now we have given something to the world, a model to build a poverty-free society.