It aspires to great heights but doesn't reach there. Though engaging, it's not entirely satiating. 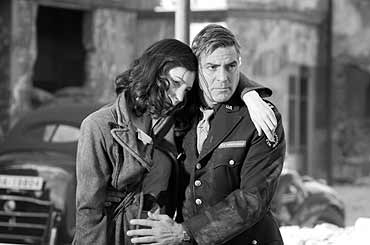 I went looking for Casablanca in The Good German. No doubt there are reminders of the classic, specially the last scene of the lady love getting away in the airplane but in spirit, Soderbergh seems to be referring more to Carol Reed’s The Third Man. Only, he replaces war-ravaged Vienna with Berlin. The bombed-out cityscape, the dank alleys, the underground hideaways, the deep secrets, the unending searches and the unyielding suspense, the decay, racketeering and corruption—all of it kept flashing that iconic Third Man scene in my mind—of Harry Lime, ie Orson Welles, virtually rising from the dead in the darkness of the tunnel, the personification of a festering society.

To be fair to Soderbergh, he manages to create the film noir feel quite well. It is stylishly mounted and wonderful to look at. But the flip side is that Soderbergh is up against some of the most loved movies of all times, celebrated for their atmospherics, the overpowering cynicism and romance. When standards are that high, only a superbly magnificent film can stand its own ground. The Good German aspires to those heights but doesn’t reach there. Though engaging, it’s not entirely satiating.

The plot has twists and turns aplenty that make it too convoluted. Clooney is the American reporter Jake Geismer who is in Berlin to cover the Potsdam conference, Tully (Maguire) is his crooked, violent driver with a much-abused prostitute girlfriend Lena (Blanchett), who turns out to be Geismer’s ex-flame from pre-war days when he employed her in Berlin as a stringer in his bureau. Lena is trying to flee Berlin but will Berlin let her go? Are there any good Germans in Berlin? Why does everyone want Lena’s husband Emil Brandt?

There’s a certain distance with which you view the characters, the involvement is not such that they stay with you after the film. Maguire’s is an interesting character with too little screen time. Blanchett, with her razor-sharp cheekbones, tries to approximate the femme fatale. Clooney looks dishy but the cynicism of a Bogart is visibly lacking, he’s too much of a contemporary cool dude despite those high-waisted limp trousers. Why does he get smashed ever so often? And how does he get back his unblemished look despite the bashing?

Hollywood
1. Blades of Glory
2. Meet the Robinsons
3. Are We Done Yet?
4. Grindhouse
5. The Reaping