The Good Bit About A Bad Sex Award 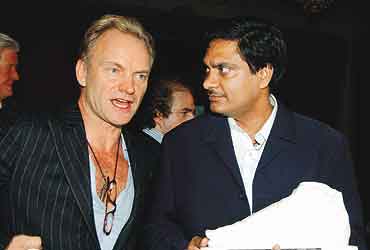 "She is topping up your engine oil for the cross-country coming up. Your RPM is hitting a new high. To wait any longer would be to lose prime time.... She picks up a Bugatti’s momentum. You want her more at a Volkswagen’s steady trot. Squeeze the maximum mileage out of your gallon of gas. But she’s eating up the road with all cylinders blazing."

My own response was rather shaky and lame. This is how it went:

"I have been disoriented for the past few days ever since an e-mail landed up in my inbox informing me that I had been nominated for the Literary Review’s Bad Sex award and would I choose to attend? I ran up many thousands of rupees calling London to figure out the extent of the calamity I faced. Finally, after having found a hot source of information, I was advised certain things. First and foremost, I was told to be very careful of what they handed over to me on the stage. I was told that if I fondled or caressed the foot of the Goddess Hermes in a particular way, a genie would leap out of it and take the shape, form and solidity of Jennifer Lopez. She would then proceed to rape me on stage. My highly placed source also advised me to carry a pistol to shoot any anti-rapists in the audience who might be misguided enough to try and thwart the crime on the stage. It was this juicy bit of prior information that really sealed my acceptance to attend the Literary Review’s party.

"This and some other things. My source also told me that he had it on good authority that the winner of the award some years back was trailed by five beautiful and luscious women to the hotel from the evening’s venue and taught many things by them during the course of the night. They might have taken pity on the writer’s sex writing and wanted to enrich his experience so that he could in future do full justice to the subject of sex in his works. Of course, it must be understood that I am only surmising here. On the other hand, I was delightfully anticipating such an enriching episode.

"My highly placed source also told me that part of the surprise package for me would be a raucous knock on the hotel door at 3 am. And as I would groggily open the door (after my exertions with the five women who would have followed me from the venue) in would walk Sting with five tantric sex goddesses and a bucket of grease....

"With all these delicious things happening to the winner, I would really have been retarded not to accept the Literary Review’s invitation. Specially as I had been assured that even if I didn’t win it, there was a consolation prize for the many nominees: a 10-day holiday to Tikrit and Mosul accompanied by two former Buckingham Palace butlers...."

I think this is how my acceptance speech ran, though, as I’d gulped too many glasses of champagne by the time Sting presented me with the foot of the Goddess Hermes, there might have been small chunks that I omitted or which I am now imagining.

I had planned a whole array of pot shots at the Literary Review but my venerable agent Gillon Aitken advised me against it. He took me aside to a corner before the festivities began and told me that the Literary Review had 50 stooges planted in the audience who would begin booing the moment I started making things a little hairy for them. These were the tactics they had employed a few years back on a writer and he departed from the stage in tears. My agent also told me that I shouldn’t worry too much about the ‘this’ and ‘that’ that the Literary Review was awarding me the prize for and should take it in high spirit. I nodded at him glumly.

But next morning my sinister designs on the Literary Review returned with a vengeance. Specially as I had waited the whole night with a drum of Vaseline (ordered from Regent Street) for the 10 scantily dressed women who were supposed to come up to my hotel room. I had left instructions at the reception not to be worried if people dropped by to see me and tipped the concierge to escort them up. I had even planned the exact order of events: where I would keep the drum of Vaseline, how I would jump on the women and the various tools I would use but all I got to do was listen to BBC digital radio. I had even organised for a special task force to whisk Sting away in the lobby itself for I didn’t want any rock star disturbing the lusty ambience with his lyrics or something.

But I had my revenge in the morning. I sent to the Literary Review’s office, by special messenger, my five-day expense-reimbursement details. The messenger told me that two people in their office fainted and the marketing team started having uncontrollable spasms. They started having a debate, even as the ambulances came in, whether they should discontinue the event. All thanks to the hotel I stay in London. I have this cosy arrangement with the hotel management. They convert all my strip club visits for naughty lap-dances, late-night sex calls with women as far away as Cuba, Bangkok and Prague, and splurges on electronically calibrated dildos and vibrators into room rent, chicken tikkas and laundry. My laundry bill alone could have taken care of the Indian cricket team’s whites while in Australia. And the chicken tikkas could have taken care of Ghenghis Khan’s marauding army for a week.

But at the end of it all I have the foot of Hermes, autographed by Sting. I even got an offer of £5,000 from a suspicious looking guy who wanted to take it from me at the party itself and I would have done it except that there were too many people looking and he started feeling up the foot first and then me. There were many other riotous acts at the Naval & Military Club where people had been misguided into believing it was a literary event whereas with Sting there with his hidden sex goddesses in the audience they should have known better.

By the way, some duffers have also started walking up to me these days and asking whether my real life sex was as interesting as my writing. The women I have taken aside and jotted their phone numbers down to give them some detailed answers. The men have had their nuts reconfigured.

(The writer is editor-in-chief of Cobrapost.com)

The Children of Deep Thought