The Glitter In The Godliness

India’s new affluence runs parallel to a new, homogenised Hinduism that is riding on a crest of religiosity. Gone with Nehruvian economics is Nehruvian secularism. 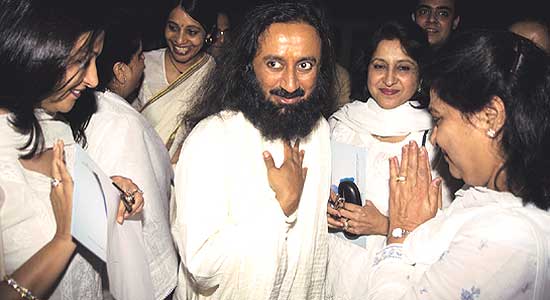 In 19th century Europe, industrialisation, and the mass migrations from farms and villages to the towns and cities, went hand in hand with the death of God: organised religion began to decline, and the Church and state moved further and further apart. The experience of South Asia has been more or less the reverse of this. All over the subcontinent faith has been growing and religion becoming stronger as the region has reinvented itself in different ways over the last twenty years. This is at least as much true of India as it is of Pakistan and Sri Lanka.

During the early 20th century, educated, urban Hindu reformers moved away from ritualised expressions of faith in favour of a more philosophical Hinduism, while Nehru and Ambedkar constitutionally formed India as a model secular state. This was to be a state where, in Nehru’s celebrated words, dams would be the new temples. But over the last two decades, just as India has freed itself from the shackles of Nehruvian socialism, in many ways, it has also gone a long way to try and shake off Nehruvian secularism.

This new religiosity has recently been the subject of a remarkable study by Meera Nanda, an academician at JNU, who has shown how globalisation is making India more religious, and religion more political. “Globalisation has been good for the gods,” she writes in The God Market. “As India is liberalising  and globalising its economy, the country is experiencing a rising tide of popular Hinduism, which is leaving no social segment and no public institution untouched. There is a surge in popular religiosity among the burgeoning and largely Hindu middle-classes, as is evident from boom in pilgrimage and the invention of new, more ostentatious rituals. This religiosity is being cultivated by the emerging state-temple-corporate complex that is replacing the more secular public institutions of the Nehruvian era...a new Hindu religiosity is getting more deeply embedded in everyday life, both in the private and public spheres.”

India, Nanda reveals, now has 2.5 million places of worship, but only 1.5 million schools and barely 75,000 hospitals. Religious pilgrimages now account for over 50 per cent of all package tours, while the bigger pilgrimage sites now vie with the Taj Mahal for the most visited sites: the Balaji Temple in Tirupati had 23 million visitors last year, while 17.25 million trekked to the mountain shrine of Vaishno Devi. In a 2007 survey jointly conducted by the Hindustan Times and CNN-IBN in 2007, 30 per cent of Indians said they had become more religious in the last five years. Such is the appetite for rituals in this newly religious middle-class. There has recently been a severe shortfall of English and Sanskrit speaking priests with the qualifications to perform Vedic and Agamic rituals. When it comes to rituals in the new India, demand has outstripped supply.

Nanda writes engagingly about what she calls ‘Karma Capitalism’ and the TV godmen, some of whom have huge following: Sri Sri Ravi Shankar’s Art of Living empire apparently claims 20 million members; much of its land, she reveals, is donated by the state of Karnataka.

Meanwhile, as in Pakistan, religion and politics are becoming ever more closely entangled. Last summer’s elections may have highlighted the inability of the Sangh Parivar to mobilise votes using communal religious grievances. But as the anti-Christian riots in Orissa earlier in the year showed, it doesn’t take much to wake the sleeping dragon of communal conflict, and Ayodhya still remains an emotive and divisive issue, as we saw in Parliament last month.

Generally, however, Nanda shows that the infiltration of religion into Indian politics is less violent and much more subtle. It is also something for which Congress is as much responsible as the bjp. Nanda presents interesting evidence about the dramatic increase in state funding for yagnas, yoga camps and temple tourism, as well as the dramatic increase of state land given for temples, ashrams and training schools for temple priests. In Rajasthan, the government annually spends Rs 260 million on temple renovations and training for Hindu priests. Mass pujas and public yagnas have now become an important part of political campaigning for all parties, not just the bjp. For 20 years, the Sangh parivar has been making political capital out of “the appeasement of the minorities” by a “pseudo-secular state”. But Nanda makes a strong case to show the astonishing degree to which the religious institutions of the majority community are now the recipients of vast sums of state patronage and funding, and how what she calls “the state-temple-corporate complex” works quietly behind the scenes for a Hindu revival.

Perhaps surprisingly, India’s growing band of techies and software professionals seem particularly open both to religiosity in general, and right wing Hindutva nationalism in particular, so much so that many have joined a special wing of the rss, which now organises regular meetings called IT-milans, where right wing techies can “meet like-minded people and get a sense of participating in something bigger than just punching keyboards all day”.

While Nanda probably gives undue space—an entire chapter—to the liberalisation of the economy since 1991, material that is widely available elsewhere, she might have said a little more about the homogenising tendencies of modern Hinduism, and the way local and regional cults and variants are falling out of favour as faith becomes more centralised. Small devtas and devi cults giving way instead to the national hyper-masculine hero deities, especially Lord Krishna and Lord Rama, a process scholars call the ‘Rama-fication’ of Hinduism.

For this tendency, the best source remains Romila Thapar’s essay Syndicated Hinduism. Here, Thapar shows how, since the mid-19th century, reformers such as Vivekananda have systemised Hinduism into a relatively centralised nationalist ideology that now increasingly resembles the very different structures of the Semitic religions its more extreme adherents tend to abhor. “The model,” writes Thapar, “is in fact that of Islam and Christianity...worship is increasingly congregational and the introduction of sermons on the definition of a good Hindu and Hindu belief and behaviour are becoming common and register a distinct change from earlier practice.” According to Thapar, this homogenising process is accelerating: “The emergence of a powerful middle-class,” she believes, has created a desire for a “uniform, monolithic Hinduism, created to serve its new requirements”. This new Hinduism masquerades as the revival of something ancient, but it is really “a new creation, created to support the claims of [Hindu] majoritarianism.”

Ironically, there are strong parallels in the way this new Hinduism is standardising faith to what is happening in South Asian Islam. There too, the local is tending to give way to the national as the cults of local Sufi saints—the warp and woof of popular Islam in India for centuries—loses ground to a more standardised, middle-class and textual form of Islam, imported from the Gulf and propagated by the the Wahabis, Deobandis and Tablighis in their madrasas.

Today, as a result, the great Sufi shrines of the region find themselves in a position much like that of the great sculptured cathedrals and saints’ tombs of northern Europe five hundred years ago, on the eve of the Reformation. As in 16th century Europe, the reformers and puritans are on the rise, distrustful of music, images, festivals and the devotional superstitions of saints’ shrines. As in Europe, they look to the text alone for authority, and recruit the bulk of their supporters from the newly literate urban middle-class, who looked down on what they see as the corrupt superstitions of the illiterate peasantry.

There is a similar if more gradual process at work in Hindu India: researching my Nine Lives, I found tantriks in West Bengal who lived in fear of Marxist ‘anti-superstition committees’, which beat up tantrik babas they accuse of bring perverts, drug addicts, alcoholics, even cannibals. Everywhere, the deeply embedded syncretic, pluralistic folk traditions that continue to defy the artificial boundaries of modern political identities are finding it difficult to compete with the homogenising mainstream.

Nanda is overtly hostile to many expressions of religiosity and her study is likely to appal as many devout and nationlist readers as it will delight their agnostic and liberal neighbours. But even those who dislike its tone must recognise this as a stimulating, controversial and pathbreaking study which contains a large amount of data unavailable elsewhere, and which opens a debate on an important aspect of modern Indian life.

(William Dalrymple’s Nine Lives: In Search of the Sacred in Modern India is published by Bloomsbury.)

Roast By The Coast