The Giani And The Sea Of Changes

Assertiveness hasn’t often been a presidential trait. But, as Zail Singh showed in 1987, it can be learnt. 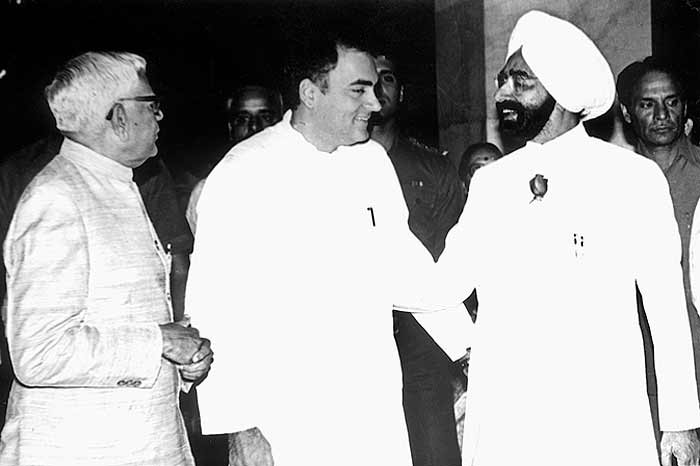 As the sun sets on a forgettable Pratibha Patil presidency, which comes to an end on July 25, speculation mounts on who will succeed her. Veteran parliamentarian Piloo Mody, speaking to us, the 1974 civil services batch, at the Lal Bahadur Shastri National Academy of Administration, Mussoorie, four decades ago, said the best address in Lutyens’ Delhi was Rashtrapati Bhavan, on Raisina Hill, but it was reserverd for a “rubber stamp”.

The president’s office is fashioned after the British sovereign, who, since the Magna Carta in 1215 and the English Bill of Rights of 1689, has progressively ceded power to parliament. The Fixed Term Parliament Act of 2011 even eliminated the sovereign’s power to dissolve the House. The Indian president’s powers are enshrined in the Constitution, though circumscribed by conventions, precedents and amendments. The president, however, names the prime minister, following an election or the resignation of an incumbent, significant in the coalition government era. He also has, to quote Walter Bagehot on the British sovereign, “the right to be consulted, the right to encourage and the right to warn”. The prime minister’s corresponding duty (under Article 78) is to inform the president of all decisions of the council of ministers and provide all information sought. The president can insist that any minister’s decision is submitted for cabinet consideration.

Dr Rajendra Prasad, the first and only two-term president, wrote in March 1950 to prime minister Nehru, enquiring if the president could act independently of the aid and advice of the council of ministers. Attorney-general M.C. Setalvad pronounced that, like the British sovereign, he must never do so. Indira Gandhi codified this in 1976 (the 42nd constitution amendment) during the Emergency. The succeeding Janata Party regime ameliorated it partially in 1978 with the 44th amendment, allowing the president to return any decision of the council for reconsideration once.

Notably, the presidential oath enjoins him to “preserve, protect and defend” the Constitution and the law. The prime minister’s oath merely prescribes true faith and allegiance to it. Presidents have mostly abided by their oath. The sum of the powers mentioned above, in the hands of an astute and morally upright person, is considerable.

Out of non-politicians, two presidents emerge. Dr S. Radhakrishnan’s term spanned the calamitous 1962 Sino-Indian conflict, the deaths of prime ministers Jawaharlal Nehru and Lal Bahadur Shastri, the inconclusive 1965 India-Pakistan war, and the ascension of Indira Gandhi. He reportedly nudged Nehru to drop defence minister Krishna Menon, and chided the newly constituted government of Indira Gandhi in his last Republic Day address in 1966. Dr A.P.J. Abdul Kalam (notwithstanding his overestimated scientific credentials) mesmerised the youth with a vision of 21st century India. Besides, his adversity-to-success saga has such a resonance that it inspires many people even today.

To consolidate power, Indira Gandhi used the 1969 presidential election to split the Congress and eject the old guard. Her presidents, symbolised by V.V. Giri and Fakhruddin Ali Ahmed, reflected a captive presidency. Re-elected in 1980, she chose Giani Zail Singh, her home minister and former Punjab CM, for presidency in 1982. Despite his initial remark that he was willing to sweep floors at Indira Gandhi’s bidding, he ironically left his post much strengthened.

Preceding his selection was a gruelling tussle between Indira Gandhi’s special assistant R.K. Dhawan, who supported Zail Singh’s candidature, and M.L. Fotedar, the PM’s political aide, blessed by Rajiv Gandhi and Arun Nehru, who was opposed to it. The Punjab insurgency, Singh’s backward class origins and loyalty to Indira Gandhi favoured him, although the sulking Kashmiri lobby sought to test Zail Singh’s loyalty by demanding an undated resignation letter. These fault-lines resurfaced after Indira Gandhi’s death.

Zail Singh first asserted himself in 1984, meeting N.T. Rama Rao, wrongly dismissed as chief minister of Andhra Pradesh by the governor, reportedly on cues from Mrs Gandhi’s aides, and his TDP MLAs in Rashtrapati Bhavan, despite the prime minister’s reservations. NTR got his post back, a favour he never forgot. Andhra is again witnessing constitutional malfeasance, as Jaganmohan Reddy is arrested by the CBI to stymie his campaigning. An investigative agency’s interference, once the electoral process is under way, is reprehensible and requires presidential intervention.

Indira gandhi held the presidency in captivity. Her son acted as if it didn’t exist. But Zail Singh, despite his infamous I-will-sweep-floors statement, left the post strengthened.

The year 1984 was also the year of Operation Bluestar, begun without the president’s knowledge. The same year, Indira Gandhi was assassinated and the anti-Sikh riots took place, during which the president’s repeated attempts to locate home minister P.V. Narasimha Rao were unsuccessful till late at night. He was distressed as no president had ever been. Had he reacted emotionally and resigned after Operation Bluestar, he would have been worshiped in Punjab. Instead, he sided with the nation, rising above religion and province. This is often forgotten by his critics. After the Delhi pogrom, he was determined to stay, realising he was the sole buffer between a beleaguered community and a political leadership.

The repatriation of I.S. Bindra, the president’s only joint secretary, to Punjab and R.K. Dhawan’s purging from the PMO indicated that Rajiv Gandhi was relying on elements inimical to the president. Rajiv Gandhi soon abandoned conventions and constitutional provisions on PM-president relations, including informing the president on affairs of the state. The president’s foreign visits were frozen for two years. Calls on the president for periodic briefings ended. If Indira Gandhi held the presidency captive, her son believed none existed. It was a unique challenge.

Zail Singh waited till the tide turned in 1987. From January, the sacking of the foreign secretary, an unpopular Postal Bill allowing mail interception (on which the president sat), the Congress’s electoral rout in Haryana, the Bofors scandal, the sidelining of Arun Nehru on health grounds and the resignation of defence minister V.P. Singh shifted the advantage to him. He rallied the opposition, commenced consultations with disaffected Congressmen, and consulted legal luminaries on the president’s residual powers to dismiss a government that was covering up corruption and devoid of moral authority. This interpretation was strongly endorsed by V.C. Shukla, a former Indira loyalist, and Ashoke Kumar Sen, a law minister in Nehru’s cabinet. To visit Rashtrapati Bhavan, they bundled into my personal car, fearful of the Intelligence Bureau, hardly presenting the image of valiant Rajiv-challengers.

The president kept bandying the dismissal theory to befuddle a cornered PM and test the Congress’s internal cohesion. The consensus amongst his official aides was that the prime minister could not be dismissed unless he lost his majority. R.K. Dhawan’s recent television interview that he saw a dismissal order is delusional. No such order existed.

An alternative strategy was to bid for a second term by contesting against the Congress’s official candidate, reversing Indira’s gambit of 1969. R. Venkataraman, who was then the vice-president, cleverly called on the president proclaiming that he would resign if overlooked, the Congress’s favourite then being B. Shankaranand. Once it sensed an emerging alliance, the Congress dropped its favourite and immediately backed Venkataraman. By the time Zail Singh’s term ended, Rajiv Gandhi was not only suddenly aware of his constitutional responsibilities but even solicitous towards the president. Constitutional balance was restored and India got a less captive new president.

Could other presidents have employed available powers differently? Fakhruddin Ali Ahmed could certainly have delayed, if not blocked, the imposition of the Emergency in 1975. V.P. Singh may not have rebelled if Rajiv Gandhi had Zail Singh’s counsel rather than his antagonism. Why was S.D. Sharma mute and Rao somnolent as the Babri Masjid was felled in 1992? K.R. Narayanan, his presidency ending, may not have written to prime minister Rajiv Gandhi on the 1984 anti-Sikh riots as he did on the 2002 Gujarat riots to PM A.B. Vajpayee. Finally, if Pratibha Patil had got the 2G spectrum issue referred to the cabinet, would not the subsequent fracas been avoided? Bagehot said of the British sovereign that “we must not let daylight upon magic”. Besides the two early entrants in the presidential race, P.A. Sangma has joined the race. His successful speakership, his candour on Sonia Gandhi’s foreign origin and cheerful demeanour indicate presidential qualities. However, regrettably, “rubber stamps” are favoured choices. The irony though is that, once in Rashtrapati Bhavan, no incumbent can escape the daylight or his oath or his predecessors’ tribulations. Quite often, the post shapes the incumbent.

(The writer, a former diplomat, is working on a book on the first seven months of 1987, during which president-prime minister relations were crucially tested.)