The Genuine Article: UP Or Gujarat?

For the moment, BJP has no choice but to fall in line with the EC 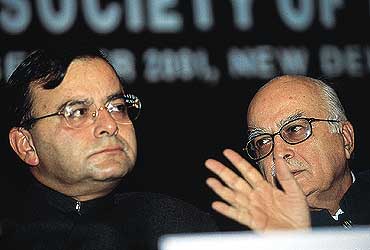 outlookindia.com
-0001-11-30T00:00:00+05:53
The longer J.M. Lyngdoh held his silence, the more it became evident that the commission was in no hurry to hold elections. And the BJP, despite making some acerbic comments on the CEC and demanding early polls last week, realised it would have to reconcile to the fact that the Election Commission could well deliver the party a monumental snub.

Tactically, after party spokesman Arun Jaitley had publicly told Lyngdoh that the EC should concentrate on elections in Gujarat and not relief measures, there was intense speculation that the Gujarat government might move court. This feeling was further bolstered when BJP parliamentary spokesman V.K. Malhotra accused the CEC of acting at the "behest" of the Congress and other Opposition parties.

Though the BJP may seek to make political capital later, it has cumbered down for now. "Even if elections are not held this year, we will abide by the EC's decision," says a key BJP leader. Jaitley, at a briefing, said "there is no question of anybody lowering the dignity of the EC. It is part of their constitutional obligation to conduct free and fair elections. The BJP had only indicated an appropriate time for polls."

The BJP's position had been further undermined by legal experts attacking its position that Art 174 of the Constitution requires that the new assembly be constituted by October as the last session of the previous House was held in April. Senior lawyer Shanti Bhushan, in a letter to the CEC, says that the BJP, which is now using the Art 174 argument, had stated on oath before the apex court in the UP elections case that the six-month clause of Art 174 applies only to successive sessions of the same House, not to a new House. To quote Bhushan's letter: "The argument of Art 174 being used for holding elections within six months of the last assembly is so absurd that it has to be rejected. What if the dissolution was made two days before the expiry of six months from the last session? Would the EC be told then to hold elections within two days and constitute a new House by then? What if there was a war going on and it was not possible to hold elections during that time? Would the army be told to call off the war because six months would elapse before the new House could be constituted? Obviously the six months in Art 174 refer to successive sessions of the same House."

Notes former Supreme Court chief justice A.S. Ahmadi: "The EC has rightly exercised its options to review the situation independently and perforce listen to the views and assessments of all concerned before taking its own decision. An election which is not free and fair is no election at all."

According to lawyer Rajeev Dhawan, if Modi was so keen on early polls, he should have called a session of the assembly and then dissolved it. "Fact is, Modi did not have the guts to face the assembly. The six-month rule was intended to apply to a live legislature so that a party in power ensured the House met at least twice a year. It was not intended to apply to a dead or dissolved House," says Dhawan.

Every Day Lost Is A Hindutva Vote Lost