The Genes Got Back To Her...

Her grandmom eloped, so did her mom, but it was dance Sukanya inherited 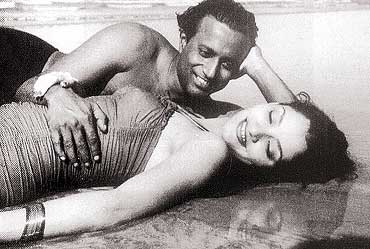 Dancing In The Family—An Unconventional Memoir Of Three Women
By Sukanya Rahman
Harper Collins India Rs500,Pages:158
Among recent Indian memoirists, Sukanya Rahman has written the oddest, most fascinating book: odd, because three generations of her family were moved and motivated by a singular obsession—a strong argument here for DNA imprinting—and fascinating because however hard novelists may try to bring the make-believe to life, the truth can often be stranger than fiction.

Despite its commonplace title, Dancing in the Family is a book so remarkably honest that it will hopefully put in the shade those insufferably pompous accounts by out-of-work politicians, bureaucrats, diplomats and journalists that plague the book market from time to time.

Rahman’s mother was the famous Indrani Rahman—the half-Indian, half-American beauty crowned the first Miss India in 1952 whose title, strangely, finds no mention in recent Miss India histories. But Indrani’s real contribution was as the dancer who put classical Indian dance on the world map from the early 1950s on.

She was the key figure, together with a nucleus that included Charles Fabri, Mayadhar Mansingh and Deva Prasad Das, who "reconstructed" classical Odissi as we know it today. More important, she was a political figure in the sense of being truly representative of a political age: as the prima donna at Nehru’s court, she was put forward with unfailing regularity, with her exquisite spoken English and Kanchipuram regalia, to charm the likes of Chou en Lai, Haile Selassie and John F. Kennedy. (The Lion of Ethiopia was so dazzled at a performance in his honour at Rashtrapati Bhavan that after showering her with gold coins, he commanded his daughter to take off her heavy silver belt and hand it to the dancer.)

More curious is the story of Indrani’s mother—the legendary all-American Ragini Devi, who prised the Kathakali form out of its shell in Kerala to present it to the outside world and wrote the first two books on Indian classical dance in English, including the landmark Dance Dialects of India. Born Esther Luella Sherman in 1896 in suburban Michigan, and raised in Minneapolis, Ragini Devi, after an early start in silent movies and exotic oriental dancing, became convinced that she was a reincarnated Hindu whose sole mission in life was to spread the gospel of Indian dance in the world.

To this end, she eloped to New York with Ramlal Bajpai, an Indian nationalist, and there left him for the smooth Marxist poet and dandy Harendranath Chattopadhyaya, brother of Sarojini Naidu. In an interview she gave in America in 1926, she claimed to be a high-caste Kashmiri who had learnt "invisible dances and inaudible music" in the secret sanctuaries of India and Tibet. In fact, it was only in 1930 that she set foot on Indian soil after a whirlwind romance with Chattopadyaya in Paris, arriving penniless and pregnant with Indrani in Pondicherry. For years afterwards, Indrani wondered who her father really was—Bajpai or Chattopadhyaya?

Ragini Devi’s subsequent adventures in India and escape to America, casting her spell on Rabindranath Tagore, toiling after dance gurus, bewitching Bombay’s seths, and battling her way through war-torn Europe, are the stuff of a transcontinental Modesty Blaise. Sukanya has pored deep into her family history and into her own reservoir of childhood memory: she hides little and tells the story with uncommon insight and vivid humour.

In time, her mother, the teenage Indrani, also eloped with an MIT-trained architect, Habib Rahman, a Bengali Muslim, later chief architect of Delhi and designer of some of the city’s best-known public edifices, including the classically pure Gandhi samadhi at Raj Ghat. The couple first lived in Calcutta and later in Delhi where Indrani forged her own influential trajectory in dance.

Behind the ambition, glamour, personal estrangements and disillusionment, however, the overriding commitment to dance never wavered. The search for dance gurus in remote villages, and the rigorous, often painful, discipline comes across powerfully. Sukanya watched riveted in Madras as the venerable Guru Chokkalingam Pillai’s "stick cracked on mother’s shin...if she lost her concentration". She went into conniptions when her bidi-smoking, ornately-dressed grandmother burst into an impromptu dance lesson on Bangalore’s Brigade Road. Sukanya trained to be a painter at the Ecole des Beaux Arts in Paris but the genes got back at her. In an unexpected twist, all three women returned to live in America—Ragini Devi and Indrani Rahman died there—and Sukanya ended up marrying her mother’s American tour manager.

One of the most engaging stories unfolding before our eyes nowadays is a phase of Indo-US relations in which India appears increasingly besotted by American interests, politically, economically and culturally. But this is a story of another kind of Indo-American encounter: individual, forceful and blazingly honest.

"It Is Utterly Senseless"