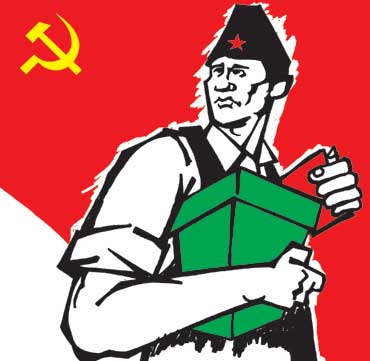 outlookindia.com
-0001-11-30T00:00:00+0553
After weeks of wrangling with the other political parties on the interim state structure, Pushpa Kamal Dahal ('Prachanda') is set to become prime minister of Nepal. He will be heading the first Maoist government anywhere to come to power through the vote, that too as the largest party by far in the 601-seat constituent assembly. The as-yet-incomplete peace process is now under the command of the Communist Party of Nepal (Maoist), even as the intricate task of constitution-making looms.

There are many 'armchair Maobaadis' in New Delhi and elsewhere who would interpret the success of the Nepalese rebels to justify the revolutionary idealism of their own youth. But the Maoists did not become the largest party on the basis of their ideology of violent revolution; if anything, the ballot was a calibrated move by the electorate to entrap the former insurgents in government, to force them to give up their hard-hearted ways once and for all. Giving the CPN (Maoist) a 37 per cent presence in the constituent assembly (which also doubles as parliament) and 29 per cent of the popular vote, the public demands accountability from the ex-rebels.

The success at the elections did not retroactively justify the brutality of the insurgency, which together with the state's reaction took 14,000 lives. The 'people's war' paralysed Nepalese society with violence that will take much time and effort to reverse, and it devastated the economy for a full decade. With patience and fortitude, a social revolution would have helped the populace prosper, whereas the armed revolution essentially helped the CPN(M) achieve power amidst Nepal's peculiar contradictions.

For sure, the success of the Maoists marks a decisive demographic shift in Nepalese society, and a vote for change by an endlessly frustrated population. Members of historically marginalised communities all over were willing to test the ex-rebels, who devised a masterful election campaign replete with populist promises, from economic utopia to ethnic provincialism. Even though much of the socio-economic dislocation of the last decade was the Maoists' doing, the hapless Nepali Congress and CPN (United Marxist Leninist) were left holding the bag of blame.

Today, we have a situation where: a) the Maoists continue to deploy militant youths all over; b) their party has been legitimised by the elections, its democratic credentials as yet untested; and c) they are about to take control of the state security machinery. Together with Dahal as prime minister, the Maoists are expected to stake claim on home affairs, defence and finance, among others.

Having landed feet first, the goal of the Maoists will be to become an establishment party of Nepal, which is of course a good thing. Without a doubt, in power Dahal will jettison his ultra-nationalist rhetoric so that he can work with India, and wear a smile for the international community so that donor assistance continues to flow. The Maobaadi have already turned their back on India's Naxalbaadi, and find themselves in the fawning embrace of the cpi(m), which for its own purposes holds the CPN(M) aloft as the exemplar of responsible leftism.

But what matters for Nepal's citizens is not how the world sees the Maoists, but how rapidly the latter will evolve into a democratic party functioning within the bounds of non-violence. While showing leniency towards Kathmandu's civil society and the national media, the party could seek to establish total control in the districts and villages to ensure a long-term grip on power. Already, there is a developing culture of silence, as the aggressive cadres fan out across the landscape. Such intimidation will surely endanger the model of participatory development that has been the success story of Nepal's democracy since 1990.

If the Maoists take the low road, today's vibrant middle ground of multiparty politics will be flattened even as an extreme right wing rises to counter the radical left. The job of Nepal's public intellectuals will be to goad the Maoists to use their insurgency-era efficiency to transform from a politico-military organisation to a democratic political party.

The litmus test of this democratic evolution will be to see whether the ex-rebels will tolerate civil liberties and fundamental freedom in the countryside. When en masse the citizens brought down the autocracy of Gyanendra Shah, they were speaking in one voice for peaceful transformation and pluralism, also sending a message to the Maoists. When they voted in the April 2008 elections, they were again asking the Maoists to lay down the gun and danda. Prime Minister Dahal must only take office with the public announcement that his party has abandoned the politics of violence for good.