Politics has always shadowed and left its impress on the Olympics 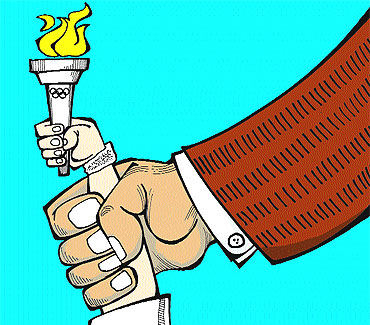 outlookindia.com
-0001-11-30T00:00:00+0553
The International Olympic Committee (IOC) is hoist on its own petard. On the one hand, it insists that politics and sport must be kept separate. On the other, it relies entirely on cooperation with governments to stage its quadrennial show. So keeping politics out of sport ends up meaning keeping whatever is politically inconvenient (especially to the host nation) out of sport.

It's been that way since at least 1936, when the IOC persisted in holding the Olympics in Nazi Germany, in defiance of a call for a boycott. The debate was particularly intense in the United States, where long-time Olympic autocrat Avery Brundage denounced the boycott as an offence to the Olympic spirit and blamed it on "Jews and Communists". In fact, Jewish organisations were divided on the boycott (many feared a backlash). And despite Nazi racism, most African-American groups were against the boycott because they wanted to see African-Americans win medals in Berlin. When Jesse Owens proceeded to win four gold medals and crush the myth of Aryan supremacy, their stance seemed vindicated. But did this symbolic victory over Fascism compensate for the role the Olympics played in strengthening Hitler's regime? And wouldn't a successful boycott have weakened him, to the inestimable benefit of humankind?

At the time, people argued that Germany was no more guilty of systematic racism than the US (which was true) and that friendly, sporting interaction would do more to change German attitudes than a boycott (which was probably untrue). It was unfair, they argued, to ask athletes to bear responsibility for their government's misbehaviour. Nonetheless, the 1936 Olympics are a reminder that sometimes sport must take a very distant second place to other concerns.

The Chinese insist that sport must not be tarnished by politics (as opposed to commercial advertising). But the Beijing Games have been a highly political project. They were always intended to showcase Chinese economic success and boost the prestige of the Chinese ruling elite. Anything that tainted the image wouldn't be welcome. Already, more than a million Beijing residents who have been removed from their homes to make way for Olympic facilities have paid a price for the regime's ambitions.

China's own history should alert it to the contradictions of Olympic participation. When the 1940 Olympics were awarded (cancelled due to WW II) to Tokyo—which had invaded Manchuria in 1931 and the rest of China in 1937—China protested in vain, and alone. After the revolution of 1949, the People's Republic was locked in a decades-long dispute with the IOC over Taiwan's participation. As a result it boycotted the 1956 Olympics and withdrew from the Olympic movement for nearly three decades.

South Africa was suspended from the Olympic movement in 1964 because apartheid was deemed inconsistent with the Olympic Charter's commitment to equality. For the next 25 years, the white regime's persistent efforts to lobby its way back into the fold were staunchly resisted by African, Asian and Soviet bloc countries—who at that time argued fiercely that politics and sport could not be separated.

In 1980, 62 nations heeded the US call to boycott the Moscow games. In a retaliatory boycott of the Los Angeles Olympics four years later, the Soviet Union was joined by 16 others. The nakedly opportunistic nature of both actions left much of the global public jaundiced about boycott calls and rightly wary of the manifold inconsistencies in everyone's position. Nonetheless, neither the host nation nor the IOC can have it both ways. They wish to use the games to broadcast their own messages. But so do others, including people with a serious moral objection to Chinese policy in Tibet.

However, China isn't the only country that could find itself in the dock. The next summer Olympics are to be held in London in 2012. If Britain is still bogged down in wars of occupation in Iraq and Afghanistan, or if it has engaged in yet another similar folly (against Iran), or if Israel's participation were to become unacceptable to significant numbers of countries and sections of the public, the London hosts could find themselves under the kind of pressure that now faces China. Doubtless, they too will suddenly discover that politics and sport must be kept separate, and it will sound as hollow coming from them as it does now from the Chinese.

(Mike Marqusee is the London-based author of several books on sports, culture and politics.)

Torrents On The Eve