The Future Is A Picture Postcard 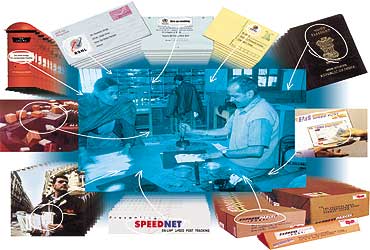 outlookindia.com
-0001-11-30T00:00:00+0553
Have you written a letter recently? Not on a computer screen, but in the old style, putting pen to paper, and then affixing a stamp on to the envelope and putting it in a red, green or blue mailbox. Chances are most of you haven't done so in months. Perhaps you've sent a greeting card? Well, maybe a few during Diwali, Christmas or New Year, but mostly, you relied on e-cards or cellular SMS. When did you last visit a post office, not to track your savings, but to buy stamps, send a registered letter, parcel, speedpost...? Six months ago? A year ago? Perhaps even longer?

But chances are that you may soon be visiting the post offices for a completely different reason—to draw cash from an ATM, drop a credit card bill, browse for PCs or cash some leftover dollars.

The coming of the e-age had struck almost the last nail in the coffin of the 165-year-old Indian Post and Telegraphs department, already reeling under the impact of competition from private couriers. Over the latter half of the '90s, urban mail stagnated, even rural mail hasn't grown. The number of telegrams and phonograms have declined, money orders shrunk. Last year, the Speed Post service generated business worth a mere Rs 91 crore while Business Post generated Rs 44 crore (total of Rs 135 crore) because of its continued reliance on walk-in customers which form only 20 per cent of the market. Private companies, about 2,300 of them, made several times that amount, capturing most of the Rs 600-crore market that is expected to grow by nearly 45 per cent next year.

As a result, despite an over 17 per cent annual increase in revenues in 1999-2000 (Rs 2,020.12 crore), the department's net deficit stood at a whopping Rs 1,595.85 crore. This has finally stirred the sleeping giant into catching the action where it is now—electronic services. "Competition is growing and we would like Indian post offices to be ready to meet today's challenges," Union communication minister Tapan Sikdar, inaugurating a UTI Bank ATM at one of Delhi's largest post offices, told Outlook.

Argues Aloke Pandey, additional DG and project manager (international money transfer services), India Post: "Business has been growing by a crore here and a crore there...that's not something we are looking at. Our initiatives must ensure both countrywide and global reach." He adds: "Look at the courier business. The industry isn't regulated, which means no licenses are needed to set up a courier company. So, anybody can offer stiff competition to Speed Post (which charges a minimum of Rs 50 against Rs 25 prevailing in the private industry). But how many know that in the event of loss, the Speed Post service is accountable, but not the courier companies, unless it's one of the top four (DHL, FedEx, UPS and TNT)."

India Post is, therefore, aiming at the corporate and banking slice by offering discounted use-now, pay-later schemes. But who'll carry the message to the commoners? The dakia, or the grumpy staff at the post office? Says Manisha Sharma, additional director general (Savings Bank and Mutual Funds & Banking Services): "This post-office-for-the poor syndrome is a typical Indian mindset.We'll remove it soon. Want a sample of our new culture? You can convert foreign currency through our tie-up with Western Union in places like Basti, Aizwal and Port Blair. We're serious, really serious."

Take another sample, the proposal on the omnibus card which will allow its holders to pay bills—electricity, telephone or credit card—at their doorstep with the postman doubling up as a bill collector, carrying a device to swipe the card for the transaction and, in the evening, connecting it to a mainframe computer in the office that'll allocate credits to appropriate accounts.

"Initially, this card would be upgraded with cash at the post office but eventually it will serve as both an ATM and a debit card," says Pandey. Negotiations are on with banks like the UTI Bank and the ICICI Bank (as also Mastercard and Visa) to access their ATM networks to start the service next fiscal as a pilot project at an estimated 202 post offices across four states where e-post is being launched. Currently, over 5,500 PC-based multipurpose counter machines, including those for savings bank LANS, have been installed at 1,100 post offices across the country. And, according to Pandey, more than 60 lakh transactions per month are being carried out. "The eventual aim is twofold: to garner business for the postal department and offering convenience to the consumer through our vast network," he adds.

Postal officials reveal that the department is embarking on a number of other across-the-counter retail financial services, a core area of thrust for its new techno-savvy business development initiative, which actually started in the early 1990s. Besides, the department is also planning to computerise its savings bank operations so that account holders can use ATM facilities. The plan is to ultimately link the post and mail offices nationwide on a vast Wide Area Network. The department plans to install 247 vsat stations, mothering 2,700 extended stations with Internet access, for backing up the virtual private networks by the end of this year.

By doing this, the department will be able to remotely reset franking machines online, combined with remote and inter-branch banking on the planned virtual private networks (VPNS) pipeline for a truly modern postal system. It'll also instal multimedia information counters at the post offices from where people would be able to avail of e-mail services. This phase will also see the installation of a CIS (customer information system) to track and trace any postal article, along with CMIS (counter and management information system) on the network to produce a total information system environment for the department.

Even HCL Infosystems has started a pilot project for three to six months at six post offices in Tamil Nadu and Andhra Pradesh to market its entire consumer product range and later extend it to another 500 post offices. Says Ajai Chowdhury, CEO: "The tie-up will make IT more accessible to the masses." So, whether or not you send snail mail, the post offices are rejuvenating themselves.