A sepoy rebelled in 1824. But was it India's first anti-Brit mutiny? 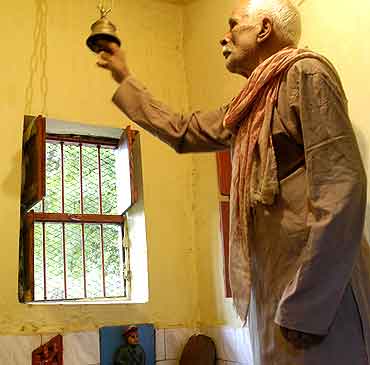 outlookindia.com
-0001-11-30T00:00:00+0553
A nondescript temple in a sylvan corner of this subcontinent's oldest cantonment has thrown an intriguing challenge to Raj-era history. A year after the nation celebrated the 150th anniversary of the 1857 revolt sparked by Mangal Pandey—officially the First War of Independence—this temple is being cited by some historians to dispute the devout sepoy's claim to fame. It was Binda Tewari, to whom this temple was built, who raised the first banner of revolt against the British 33 years before Pandey's mutiny, say these historians. And, they add, history textbooks ought to be corrected to accord Binda the status of hero of the First War of Independence.

That Binda, a sepoy of the 47th Native Infantry, led an uprising by disgruntled Indian soldiers of his and of two other regiments stationed at Barrackpore, is an undisputed fact. Many prominent historians, including Ramesh Chandra Majumdar and Amalendu De, have chronicled the 1824 revolt. According to records at the state archives and with the army, the 26th, 47th and 62nd Native Infantry battalions were ordered to march to Chittagong port and then board ships to reach present-day Yangon to participate in the Anglo-Burmese war being pursued by governor-general Lord Amherst. 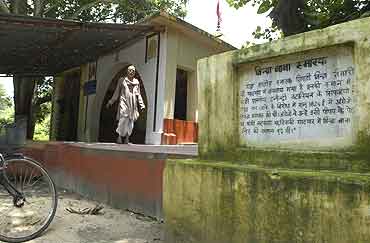 Tranquil: An outside view of the shrine

However, the soldiers were not provided any means of transport and the very thought of crossing the sea (kaala pani) made them angry as it would have broken their caste taboos. They demanded bullock carts to carry their belongings, improved battle gear, that their 'bhatta' (emoluments) be doubled, and insisted that they move only by a land route. When the British officers at Barrackpore—the cantonment was set up in 1765, making it the first in the subcontinent—refused to meet these demands, the sepoys revolted on November 1, 1824, and drove away the British officers. For two days, the cantonment was under the control of the sepoys, led by Binda.

On November 2, two battalions of European soldiers, backed by the governor-general's bodyguards and light infantry, were deployed by commander-in-chief Sir Edward Paget to Barrackpore. This force reached the outskirts of Barrackpore, 22 km north of Calcutta, on November 2 evening and camped there overnight. The next day morning, a certain Captain Macan rode out to the mutinous sepoys to convey Sir Edward's message: that their just demands would be considered, but they'd have to surrender unconditionally before that. The sepoys rejected this precondition, leading to a full-scale assault on them by the European troops and the artillery. The mutineers were overpowered soon, and more than 200 were killed. Binda and eleven others were tried and sentenced to death. Binda was singled out for particularly brutal treatment—his limbs were chained, he was hung from a pipal tree and his body was allowed to rot for days. "The British did this to send a chilling message to anyone harbouring rebellious thoughts," De told Outlook.

Six months after this cruel hanging, Indian sepoys defiantly erected a temple to Binda next to the pipal tree from which he was hanged. Binda Baba temple, as it is now known, has Lord Hanuman as its presiding deity, and draws scores of visitors—including Barrackpore's present station commander Brigadier Bobby Mathews as well as many of his men—every day. There are two distinct sections in the temple—the older and smaller one contains a foot-high stone statue of Binda Baba dressed in olive green (old-timers say the statue was dressed in red coat and white breeches as worn by British soldiers, but was inexplicably painted olive green a few decades ago) and carrying a musket; the new, more spacious section is dedicated to Hanumanji. "But this temple is known as Binda Baba mandir. He (the baba) is very powerful and blesses everyone, especially good and brave soldiers," says the temple's resident priest, Bindeswari Pandey, 75.

The temple runs on donations from men in uniform and their families as well as locals, and Pandey is provided breakfast, lunch and dinner everyday from the army mess nearby. The Barrackpore Cantonment Board renovated the temple complex during the filming of a documentary—Muktir Bahnisikha (Flame of Freedom), which acknowledges Binda's as the first revolt against the British—that it commissioned last year.

But does the 1824 mutiny qualify for the tag of First War of Independence? Kanaipada Roy, chronicler of Barrackpore's history and a tireless advocate of the cantonment being accorded primary status as the one that spawned two uprisings against the British (1824 and 1857), argues forcefully for Binda. "He leveraged the anger among his fellow soldiers against British high-handedness and injustice, and motivated them to revolt. This was no mean feat at a time when most, including many powerful local rulers, considered the British invincible and had abjectly surrendered to the foreigners. Binda was an unusually brave man and needs to be accorded his rightful place as the first Indian who revolted against the British," he says.

But other historians, including De, are more circumspect. "The 1824 revolt finds adequate mention in the history textbooks I wrote for high school students of Bengal. That revolt definitely inspired Mangal Pandey on coming to Barrackpore and learning about it. I can say with authority that Binda's heroism impressed, influenced and motivated Mangal," he notes. "But to call the 1824 revolt as the first war of independence would be stretching things a bit too far. Yes, it has to be accorded due recognition. But let's just say that the 1824 revolt that was confined to Barrackpore provided inspiration for the 1857 uprising that engulfed many parts of the country," he told Outlook.

Others, like historian Rudrangshu Mukherjee, who holds that Pandey's was an "individual act of defiance against British officers", are loath to accord much importance to the events of 1824. But this doesn't deter people like Roy. "The fact remains that Pandey is officially recognised as the hero of the 1857 revolt that's also been termed as the First War of Independence. My point is that Binda's act was no less heroic than Mangal's, perhaps even more so. And if the 1857 revolt can be given that tag, why not 1824?" argues Roy, who teaches philosophy at a college at Barrackpore.

That said, revising history, even when indisputable facts are presented, is at best a contentious exercise. Binda Baba may be revered by legions of officers and men in the Indian army, which also officially acknowledges the 1824 revolt, but schoolchildren across India look likely to remain largely ignorant of Sepoy Binda Tewari