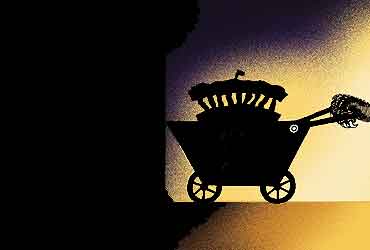 outlookindia.com
-0001-11-30T00:00:00+0553
When the voters threw out the National Democratic Alliance, they were not voting against A.B. Vajpayee, or for Sonia Gandhi. They were voting against the miserable condition of their lives, the lack of employment and the increasingly extortionate nature of their governments. But precisely because every election is a protest, every government has the opportunity to make a new beginning—to offer the people a new vision of the future and give them hope.

The Congress has this opportunity but is throwing it away. For, far from chalking out a new future for India, it has, through its own actions, put itself on the defensive in Parliament and before the people. Two of the issues are already at the forefront of public attention: the third is waiting in the wings to ambush the government at the appropriate moment.

The first is the induction of as many as six ministers in the council of ministers and the cabinet who face charges ranging from kidnapping, dacoity and attempted murder to embezzlement and fraud. The second is the access being given to Sonia Gandhi to official files. The third is the reservation of jobs in the private sector for SC/STs and OBCs.

Of the three, the first is by far the most serious and won't go away. Laloo Prasad Yadav, Union minister for railways, is under trial for no fewer than seven cases, six of them criminal, relating to the infamous fodder scam, in which an estimated Rs 900 crore worth of non-existent fodder was purchased by a succession of governments in Bihar. But Laloo's alleged crimes fade into insignificance before those of two other ministers, Taslimuddin and Ali Ashraf Fatimi. Taslimuddin faces nine criminal charges. According to a report of the legislative committee of the Bihar assembly in 1996, he was, even then, "a habitual criminal whose offences range from extortion, cheating and rape to dacoity and attempts to murder". This did not deter Laloo Yadav from proposing his name to the United Front prime minister H.D. Deve Gowda as a member of his council of ministers. Taslimuddin actually took the oath of office before a furore in the Bihar police and legislature forced Gowda to get rid of him. This time, the Congress seems determined not to follow his example.

The charges against Fatimi are every bit as serious. According to police records, he is implicated with an inter-state gang of kidnappers that has kidnapped people for ransom in Maharashtra, Gujarat, Karnataka and UP. Fatimi, however, has only one criminal case actually registered against him, but the police says this is because he's enjoyed the unstinting protection of Laloo Yadav for the last 14 years. Three other ministers are accused of being 'tainted'.

When asked to explain these appointments, the Congress has tried to go on the offensive and remind the Opposition that it too had tainted ministers. Dr Manmohan Singh also pointed out that none of the ministers had actually been convicted of a crime and so had to be considered innocent until proven guilty. But while this may satisfy a court of law, it will not satisfy the ordinary people to whom the Congress too will have to return one day for its votes.

None of them has any illusions about the nature of Laloo and his ilk. Ask any Bihari and he'll tell you that law and order have ceased to exist in his state. With it has gone all hope of development and a better future for their children. Their only hope is to emigrate to other states and that is what they have in fact been doing in ever increasing numbers. According to a recent estimate, 28 per cent of the adult male population of the state now works elsewhere in India. Within Bihar, kidnapping is endemic and even national retailers have closed their shops and moved elsewhere. Predatory gangs rule the roost.A favourite pastime is to rob trains and to wait for disembarking migrant workers to rob them of whatever they have brought home for their families. As a result, migrant workers now travel back to Bihar whenever possible in large gangs, for that is the only way to keep the predators off.

Laloo Yadav is not a helpless onlooker. His own actions show that he approves of the lawlessness and is prepared to be the patron saint of those who indulge in it. It might have been too much to expect him not to claim a cabinet berth for himself, but in the 18 other RJD MPs, could he not find even three reasonably honest and educated candidates for ministership? Did he have to recommend three persons with the worst criminal records in Indian politics?

The truth is that Laloo Yadav could not care a fig what the media and the intelligentsia have to say. His aim is to let the whole of India know that a new age has dawned. India is no longer ruled by Law but by muscle power. The way to become a minister, or even the prime minister of India, is not to be a model citizen but through murder, dacoity, fraud and embezzlement. All one has to do is to assemble a gang of hoodlums and wait for the ever-hungry politician to come begging for support.

One cannot even feel sorry for the Congress, for it is they who kept Laloo Yadav in power in 1997 when the RJD split and he lost his majority. But the irony of the situation that has now developed will not be lost on people for long. In Gujarat, the BJP violated its constitutional obligation to defend the rule of law in order to propagate Hindutva. Today the Congress is, in effect, doing the same thing in order to defend secularism.