The threat calls went unheard. Youths in J&K and the Northeast went out to vote for change. 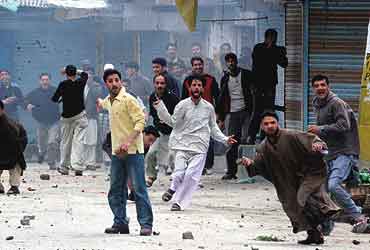 This time they voted. Queues at the polling booths in the Valley were packed with young people who braved separatist calls for boycott and militant threats. Overall voter turnout was low but Kashmiri youth returned to the electoral process. In most urban centres like Srinagar, the young comprised almost 90 per cent of the voters.

"I’ve been unemployed despite a first class post-graduate degree in science," said Muhammad Hanief as he lined up at a polling station in central Badgam district. "There are no local industries that can absorb people like me. At least electing the right person might help." For the first time, youth wings have emerged both in the ruling People’s Democratic Party and rival National Conference. Other parties too have focussed on the youth.

Yes, the youth want the Kashmir dispute to be resolved, but they also want a better life. The anger is writ large on Sajad Ahmad’s face. He is a burden to his aging father even several years after earning an engineering degree. Ahmad is just one of the thousands who are looking for odd jobs to keep the wolf away. "Even a supervisor’s job is fine," he says.

"What are the separatist politicians doing for me? None of their children are unemployed. They have plum jobs in the government or businesses abroad," says Abdul Majid, who insisted his name be mentioned with the quote. Says a senior bureaucrat: "It’s appaling that the local police department has been getting thousands of applications for a constable’s post from post-graduates and engineers."

Years of violence has ravaged the educational system and infrastructure. Says an educationist: "In the last 15 years, just one Kashmiri has made it through the civil service exams. We’re totally left out."

In 1998, the then Prime Minister I.K. Gujral had said: "We have to increase the stakes of the Kashmiri youth in the...