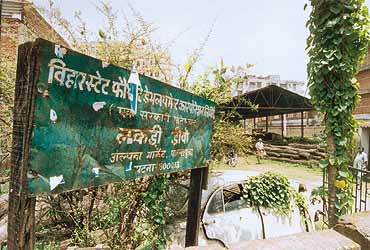 outlookindia.com
-0001-11-30T00:00:00+0553
A desperate Jagdish Mandal had planned to sell off one of his kidneys. He was left with no other alternative to raise money for the treatment of his wife and a mentally challenged son. An employee of the Bihar State Construction Corporation—one of the 49 state government undertakings in the red—Mandal had not been paid his salary for the last nine years. A recent Supreme Court order came as a great succour for him and 88,572 other unpaid employees of Bihar's 49 sick PSUs. The apex court directed the state government to deposit Rs 50 crore with the Patna High Court for the disbursal of a part of the unpaid salaries. However, the relief proved short-lived.

The state government, after complying with the directive, decided to wind up 18 PSUs. "This comes as a huge blow," says Ashwini Kumar, convenor of the Bihar Rajya Sarkari Lok Upkram Bachao Sangharsh Morcha, which will be challenging the government's decision in court. The controversy over the fate of the loss-making undertakings had been dragging on for about two decades. But successive governments failed to act. Neither were the sick PSUs streamlined nor were they wound up. They were simply allowed to run up huge losses while successive chairmen and vice-chairmen plundered the corporations they headed. Recently, A.K. Singh, a senior IAS officer working in the State Finance Corporation, was arrested for irregularities. As Kumar says, "Corrupt politicians and bureaucrats are responsible for the present mess."

The employees' plight came to the fore when a youth, Chandan Bhattacharya, immolated himself outside the Patna High Court on August 15 last year. Chandan could no longer bear the agony of his father—an employee with the Agro-industries Corporation—who had not got his salary for the past 10 years. Before that, another employee, Kamal Sharma, had immolated himself. Then there was a spate of attempted suicides. But all this failed to wake up the Bihar government.

With no work and no pay, thousands of employees have been forced to turn to other sources of livelihood. Purshottam Singh sells tobacco leaves on a Patna street and earns Rs 20 to Rs 50 a day. His friend Maqsood Alam repairs bicycles. Says a tearful Alam: "During the Congress regime we were assured of at least our salary. But this government cares for only politicians and criminals."

The financial mess that the Bihar PSUs are in is difficult to believe. Going by official figures, 1.5 lakh employees of various boards and corporations have not received their salaries for periods ranging from 14 to 94 months. The Comptroller and Auditor General in its report found that of the 54 boards and government companies—in which the government had sunk and lost over Rs 8,168 crore—32 are non-functional or sick. The state electricity board and the transport corporation, the two huge white elephants, have an accumulated deficit of Rs 3,654 crore and Rs 325 crore respectively.

Sangharsh Morcha president B.B. Singh, however, contends that all the PSUs to be shut down are not loss-making units. He gives the example of the Bridge Construction Corporations and the Housing Board which have been paying salaries to their employees from their internal resources. But such examples are rare in Bihar. Singh feels the government should not have wound up the PSUs in such a haste as it only compounded the unemployment problem. He estimates that with the closure of the Handloom and Handicraft Corporation, five million people have become jobless. Twenty million farmers have been affected by the closure of the Sugar Corporation and lakhs of scheduled caste workers with the winding up of the Leather Corporation.

The state government seems unmoved. It pleaded in the Supreme Court that employees of the public undertakings were not its liabilities and that many were not legally appointed.But even if this is true, the onus to pay them still falls on the state government since its own chairmen, vice-chairmen and managing directors have been responsible for the appointments.

It almost seems as if the Rabri Devi government would rather see the last of the sick PSUs. Any attempts at revival may involve an examination of their books of accounts. And that will be more embarrassing than protests from employees who have already learnt to live without salaries for years.

Bush And His Buddy