Advani has dug himself into the trenches, it looks a long drawn-out battle with the Sangh. Meanwhile, the much-touted BJP second rung weighs its options. Updates 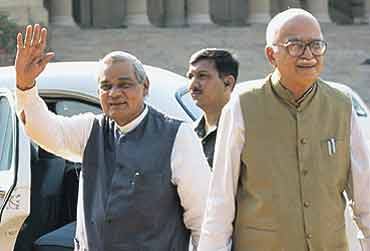 outlookindia.com
-0001-11-30T00:00:00+0553
Could this sequel of the BJP's Star Wars be titled the Revenge of L.K. Advani? When the BJP president and leader of the Opposition refused to quit one of his two posts after being expressly told to do so by the Three Wise Men of the Sangh last week, inner parivar strife acquired a deadly new dimension. Advani's action set into motion a sequence of events that may redefine the fundamentals of the RSS-BJP equation.

Stung by Advani's move (the most public challenge to RSS authority in the 80 years of its existence), the Sangh brass has currently retreated behind the walls of its headquarters in Nagpur. Sarsanghchalak K.S. Sudershan, scheduled to leave for a niece's wedding in the US on July 18, has cancelled his trip because of the "crisis in the BJP". His deputy, Mohan Rao Bhagwat, who led the high-powered delegation to Advani's residence, left for Nagpur the next day to report the details of what transpired to the sarsanghchalak.

In the current scenario, the positioning of Atal Behari Vajpayee has become the subject of intense speculation. The Advani camp has been invoking his name. But the RSS too claims to be "satisfied" with Vajpayee's response. As the Bheeshma pitamah-like figure in a warring parivar, Vajpayee undoubtedly has the role of arbiter. Party sources say the former PM disapproves of the RSS micro-managing the affairs of the BJP; but he also believes that the Sangh should be managed, not confronted. Vajpayee is also seen as the only individual left who can "persuade" Advani to quit if the situation deteriorates further. For if Vajpayee ditches Advani, he will be left in no man's land. And if he backs him fully, the RSS could find the tide turning against it. If the past is any indicator, Vajpayee will take a carefully nuanced position, designed to earn him public applause and continued leverage over party affairs.

Vajpayee gave no clue to his strategy in the speech on July 14 at a public function in remembrance of the late S.S. Bhandari. A top RSS leader, Inderesh, however, took a dig at Advani (also seated at the podium), saying: "Sacrifice is the central theme of the RSS. It is only through sacrifice that a man becomes a hero. Not by clinging to material things." Meanwhile, high-level RSS sources said they will formulate a strategy for future action against Advani by the end of the month after closely monitoring proceedings at the BJP national executive in Chennai (July 21-23). Some parivar functionaries even suspect that Advani may reconstitute the team of BJP office-bearers to exclude RSS whole-timers. Says a BJP MP: "There is speculation that given Advani's current mood he might bring Sudheendra Kulkarni back into the team." In such a situation, the RSS faces the clear and present danger of losing control over the BJP.

The RSS leaders had after all told Advani that given the feedback of the cadres, "it was in everyone's interest" if he made way for a younger leadership. Outlook has learnt that they suggested that Advani and the BJP agree on one leader, failing which a "panel" of leaders could be projected. Advani is believed to have responded that he had said nothing wrong in Pakistan but was still ready to quit if the BJP office-bearers told him to do so. He had clearly rebuffed the RSS.

The same night, the BJP second-rung were summoned to Keshub Kunj, the RSS' Delhi HQ in Jhandewalan, and given a stern ideological sermon. Without mincing words, Mohan Bhagwat told them that Advani's postures adopted in Pakistan "were completely unacceptable" to the cadres; there must be "no further deviation" from ideology. The RSS did not in so many words order the second rung to sack Advani, but made it clear that they were on notice and were expected to ensure the primacy of ideology over an individual.

In other words, both Advani and the RSS have put the ball in the court of the Gen-Next leaders of the BJP. Says RSS spokesman Ram Madhav: "The press believes that Advani has not listened to us. But we have conveyed our sentiments to others also. Let them decide what to do. They are all mature individuals who took a clear ideological stand against the party president for his statements in Pakistan. They will know what to do at the right time." It seems that both the BJP and RSS expect this to be a protracted battle.

Meanwhile, Advani continues to fight a lonely war. Jaswant Singh and Venkaiah Naidu are the only BJP leaders to have openly pleaded his case with the Sangh, and they continue to try and manoeuvre the party around him. Sushma Swaraj, Pramod Mahajan and Rajnath Singh have chosen to keep out of harm's way while Arun Jaitley is in hospital recovering from a heart bypass surgery. 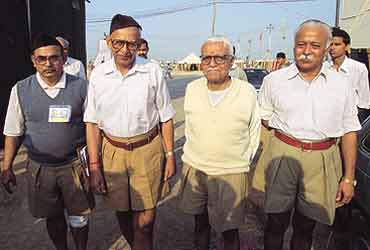 Advani acolytes have been putting out the line that he has struck a brave blow in the greater cause of asserting the BJP's independence from the RSS. Perhaps Advani would have carried greater credibility in this enterprise if he did not continue to flip-flop on ideological issues, donning the "secular" garb one day, chanting Jai Shri Ram the next. As a BJP MP put it, "Does Advani have the courage of his convictions or is he just an old man reluctant to relinquish power? We don't know any longer."

Given the closely enmeshed BJP-RSS relations, partymen have been compelled to adopt duplicitious positions. Take the utterances of Sushma Swaraj last week. She calmly told journalists that "no one ever asked Advani for his resignation", then avoided stating clearly whether she expected the loh purush to complete his term as president. The next day, without checking with Advani, she took the initiative of attacking NDA convenor George Fernandes for "crossing his jurisdiction" (he had asked the RSS to confine itself to socio-cultural matters and not interfere in politics).

Adding a twist to the tale are reports that the Fernandes statement was contrived by the Advani camp. Particularly as Sudheendra Kulkarni is believed to have visited Fernandes' residence the day he issued the statement. Perhaps that is why Venkaiah Naidu refused to attack the NDA convenor: "We have a special relationship with both the RSS and the NDA. The press should not worry about us." But to win some ideological brownie points with the Sangh (to offset the minus points for backing Advani), Naidu called a press conference to take a shrill posture on the imdt act. "We will run a campaign to demand the 3-D formula. Detection of illegal immigrants from Bangladesh, deletion of their names from voter lists, and their deportation." Clearly, such ridiculously packaged posturing was aimed at the RSS, not the Indian public.

In the coming weeks, other ambitious second-rung leaders can also be expected to take hardline postures to please the Sangh, even as the party president claims to be engaged in a project to disengage with Nagpur. The deep neurosis currently afflicting the BJP leaders can be traced to this complex inner parivar relationship. For if Advani is indeed engaged in a mighty battle against the masters at Nagpur, then as general he must also constantly worry about desertion and subterfuge in the ranks.