The Feminine In The Sangh 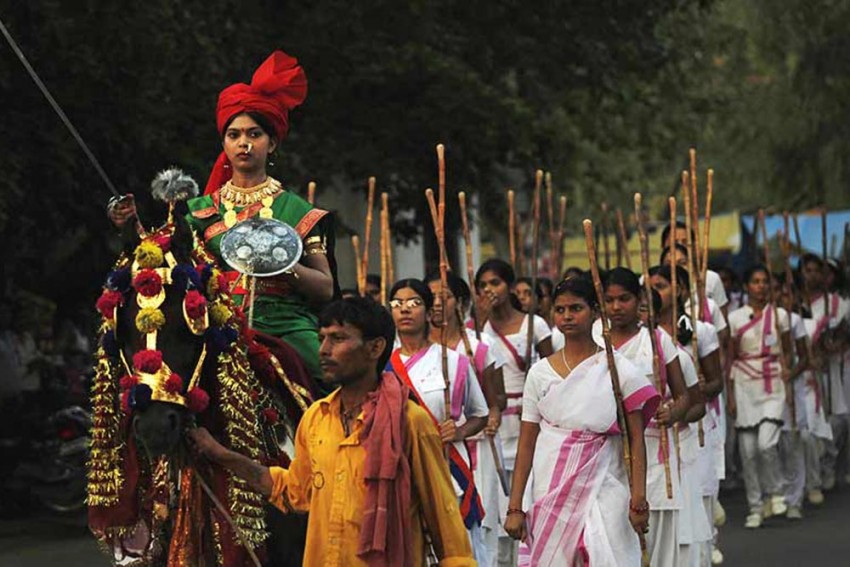 Some years ago, Sridhar Damle, co-author of The Brotherhood in Saffron, took me to an RSS meeting. It was unscheduled and any misgivings we had about intruding had to be managed with deft timing. Since the Sangh works like clockwork, we planned to reach the venue a little after six; by then the meeting or “baithak” would have concluded. “We will be in time for the snacks!” the sprightly Damle said. It is important to note that partaking of meals is an essential aspect of Sangh bonding. Pracharaks travel extensively and have their meals at the homes of others. One of the first things you notice about the RSS, when interacting with pracharaks, is that monastic traditions resonate even in the most familiar tasks.

As predicted by Damle, we arrived just in time for snacks—the meeting had concluded and the attendees were gathered in the basement of the Deen Dayal Research Institute (DDRI). There were both men and women, and any doubts I had of being the lone female “interloper” were instantly dispelled. It was also the first time I met a ‘pracharika’ from the Rashtra Sevika Samiti, at times referred to as the Sangh’s women’s wing, though it is an independent organisation that runs parallel to the Sangh. In the everyday workings of the Sangh, women are always present. It is only outsiders who perceive the Sangh as an all-male organisation. The response to this “accusation”, often met with a twinkle in the eye, is that “Shakha mein mahilayein nahin hai, par Sangh mein hai!” (There aren’t women in the shakha, but they are very much there in the Sangh.) The truth in this becomes self-evident as one navigates the labyrinth of the Sangh. And many women Sangh workers were incarcerated during the Emergency.

That evening, the venue was on loan from DDRI, and the Sangh, with limited options at its disposal, is ever mindful of these favours and careful not to exert its presence. Bringing their own volunteers and food, spaces are used after working hours or on weekends. The “wrap up” is swift—floors are swept, garbage collected—and the departures quick. It happens meeting after meeting.

In the Sangh’s everyday ­workings, women are always ­present. Many were jailed during the Emergency.

This gathering comprised national and international office-bearers of the RSS, but no formality was attached to their presence. Post the meeting, they all left on foot for the short walk to Keshav Kunj, Delhi HQ of the RSS. The young pracharika was on her way to the metro station and I offered to drop her off. During our short ride, I realised we were just as curious about each other. “Are you any different from pracharaks?” I asked. “Same,” she replied, a little amused. She wore a simple salwar kameez, carried a jhola and held a cell phone in her hand, the last item emp­hasising her years as a pracharika. Sangh ideology underscores frugality and a cell phone is only given when responsibility and coo­rdination work increases. The younger pracharaks and pracharikas make do without one for the first few years.

The pracharaks have grabbed popular imagination in a way that pracharikas haven’t and the parallel I drew was gendered, but she didn’t seem to mind. “You never wanted to marry?” I pressed on, warming up to this theme of voluntary singlehood. “I made a decision” was her simple answer. It had been a harrowing time for me personally and I sputtered out with unanticipated vulnerability that it was difficult being a single woman. Instinctively, she reached over and held my hand, her gaze fixed on me and her voice steady. “It’s alright,” she said from a place of such immense security and sense of purpose that I could not help but feel reassured. And in that instant, I realised this is what they did. This is what made them different, as they traversed the hidden world of Indian women, in the privacy of a car or a tribal dwelling hundreds of miles away, or on a concrete artery like the one we were navigating. They address the vulnerabilities that women dare not, silenced by their weakness or by the need to always appear strong.

Pracharikas travel throughout the country, are posted to “outposts” and get by with meagre allowances, working tirelessly and unheralded. They also bring to you the reality of the two Indias, one male and ­another female; they work in the latter because the times demand that service is defined and focused on gender. And they face the same negation in popular discourse that women around the world encounter at the workplace. But their contribution is immense.

The longest-serving female MP and Speaker, Sumitra Mahajan, trained with the Rashtra Sevika Samiti, and in a gentle but firm manner, which is uniquely their own, she once sent a book on the organisation to Rahul Gandhi, who had asked about women in the Sangh.

(The writer is working on a book on RSS founder K.B. Hedgewar)

Many Members Of The Extended Family Of RSS