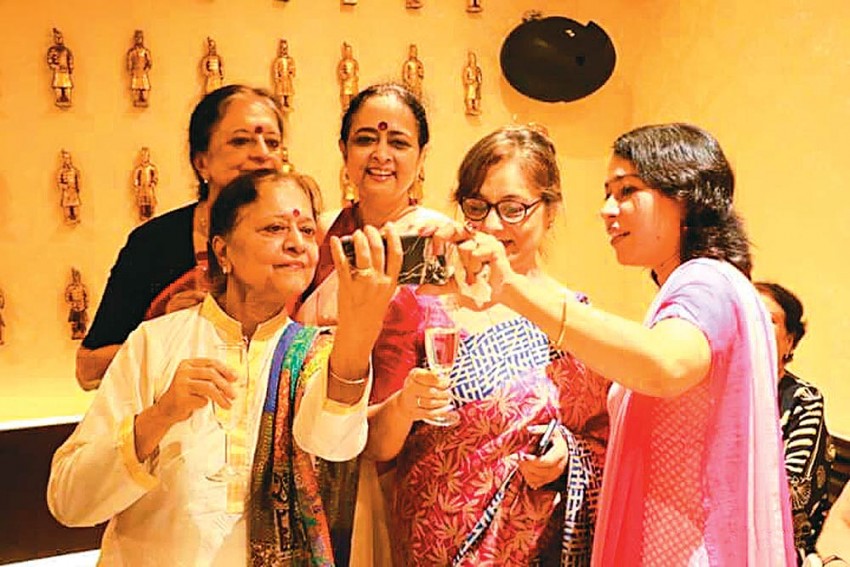 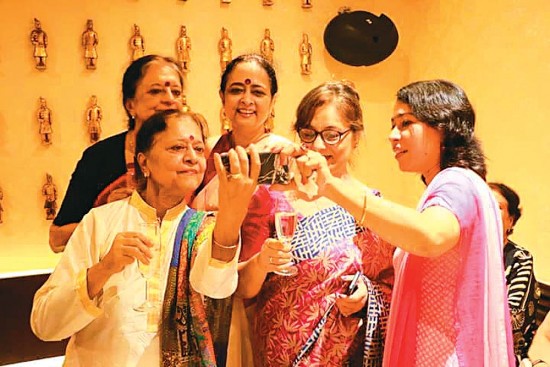 “In our parties we do every­thing that happens in a ‘wild bash’. We drink hard liquor, we play loud music and dance like there’s no tomorrow,” says Proneeta Mukherjee, who is manager at a Calcutta beauty salon. There’s nothing unusual about this description of a ‘rave do’ except that Mukherjee is not, in her own words, “a spring chicken with whom society associates such wild parties.” She’s a 60-year-old woman who, along with a group of her friends, most of them her age or older, has rediscovered the art of partying. “Sometimes when we shake a leg, our knees knock together and our bones rattle, but we don’t stop,” quips Mukherjee. ­“Instead, we try to synchronise the sound of our creaking joints with the beat of remixed versions of retro tunes we had grown up listening to.”

Mukherjee’s mildly self-deprecating humour apart, her account of how she and other women like her—most of them currently single, whether widowed, divorced or unmarried, and past retirement age—are bonding the way the younger generation does, could possibly describe the beginning of a trend catching on in Calcutta. And this generation of elderly Bengali women, who would have borne the brunt of a conservative society’s age-related taboos, is stepping out of confined zones and into areas where their mothers never dared. Usually the long list of don’ts inc­luded, among others, not wearing colourful sar­is past a certain age, not eating non-vegetarian food and not doing anything that is remotely entertaining.

“When my mother and grandmother were my age, they were expected to stay indoors, do ‘puja’, wear drab clothes, eat in moderation, and generally ‘act their advanced age’ until it was time for them to go,” says a 70-year-old ret­ired schoolteacher. “I could sense the intense ­depression older women felt because it had been imposed on them to think that their time was past.

“I used to dread the day when my time would come,” she adds. But when she turned 70, she found that a few of her ret­ired women colleagues decided to meet for a “reunion” to celebrate her birthday. “We had been close while working tog­ether but had drifted apart after that,” she says. “Now we meet regularly at our parties. We gossip, sing songs, watch movies together and of course, eat, drink and make merry.” She says that she and her friends have been able to overcome the stigma att­ached to older people partying by, well, doing more of it. 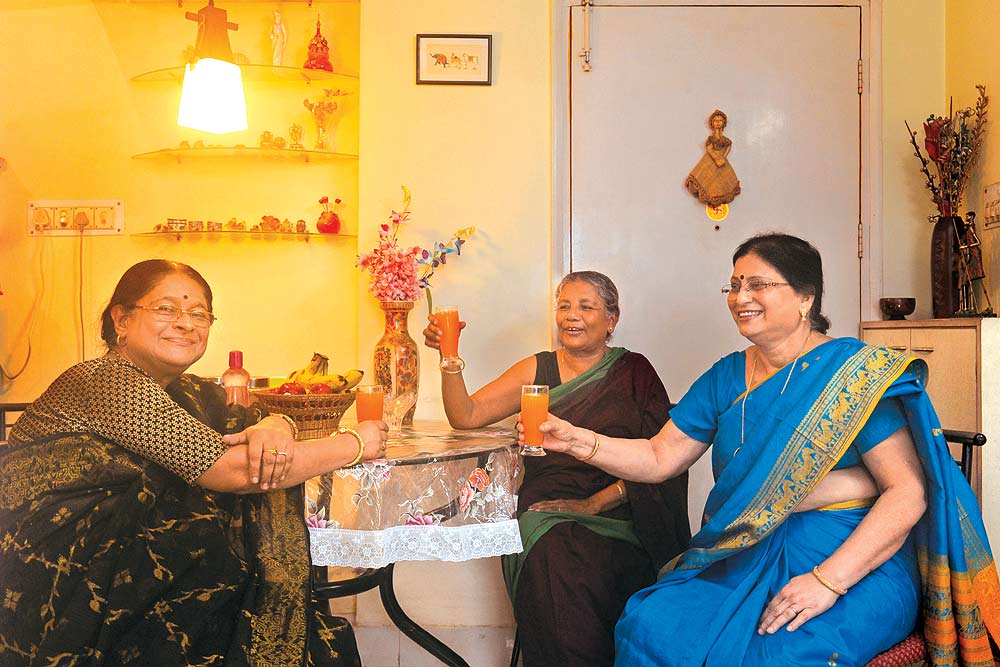 Photograph by Sandipan Chatterjee
“The proverbial ‘loneliness’ that has been associated with old age stems from ­soc­ietal pressure for the elderly to stop having fun as though it is the sole prerogative of youth.”

In Calcutta’s suburban Behala, a group of women are so addicted to their weekly parties that after one of the women, in her mid seventies, fell down and broke a leg, she insisted that she be taken to the venue in a wheelchair. “Ini­tially I was quite shocked when I came home one day to find my mother dancing wildly with her women friends, one of them gyrating from her wheelchair,” says Ratnadeep Ghosh, a Calcutta filmmaker and the son of one these elderly “party animals” as he calls them. “However I corrected my own attitude when I realised how much fun she was having. Usually when I came home from work I would find her sitting in front of the television watching some sad soap opera, waiting to serve me dinner and retire to bed.”

So what is it that is drawing so many elderly women to these parties? “Well, at the core of it is plain and simple fun,” says Jharna Mitra, who, in her late sixties, is part of a group of women who meet regularly through the week. “The proverbial ‘loneliness’ that has been associated with old age stems from soc­ietal pressure for the elderly to stop having fun as though it is the sole prerogative of youth. If we can change this mindset I think we can solve the social problems associated with gerontology itself.” Take the example of Shipra Chatterjee, a homemaker, based in suburban Calcutta’s Garia, who is part of Mitra’s group of party friends. Chatterjee had slumped into so much depression after her husband suddenly died of a heart attack four years ago that she thought it was the end of the road for her too.

But more than her emotional loss, she was bracing herself for the tacit ­social pressures—dressing down, looking subdued. For someone who liked to dress well, it was a soul-crushing thought. Though her son and dau­ghter-in-law tried to convince her oth­erwise, it was not until the women in her ­apa­rtment complex got together and ­decided that they would “dress to the tee” for every party that she truly shed her inhibitions.

It was Bashabi Adhikar’s idea, who’s a ret­ired schoolteacher. “She made a rule that anyone who arrives ‘under dressed’ would be barred entry,” laughs Mitra. “I have been thrown out on many occ­asions and made to go back home and change. Fortunately we all live in the same building,” she adds. Chatterjee, one of the most compliant to the dress code, takes out her finest jewellery and best saris, trying never to repeat a look. “I look so forward to these parties that I don’t feel like going anywhere else.” ­Recently she turned down a req­uest from her children to accompany them on a tour to Europe, saying that she didn’t want to miss the parties.

Archana Banerjee, a homemaker in her late sixties, suddenly lost her husband in 2013. She too remembers facing the prospect of an empty and lonely life. But life changed when she moved into the apartment complex at Garia where one of her daughters lives and became a part of this women’s group. The parties here began as planned wee­kly dos, but soon become regular imp­romptu affairs at different houses. And now, these parties have become so popular in the building that even the youngs­ters—mainly adult children of the elderly women—want to gate-crash them.

And mind you, these elderly galas are different from kitty parties. There is no money involved and these are not stoic card game gatherings, but wild, dancing parties. Sociologists, like Bela Bhadra, get a grip on the trend, linking it “to the modern day breakdown of family structures.”

In earlier generations, mothers and grandmothers were surrounded by their children and grandchildren and there was little scope to seek companionship outside. While society did indeed imp­ose a number of restrictions on them, they were not deemed to be ‘alone’. This started changing when the young started moving out for education and emp­loyment, roughly since the Eighties in a city like Calcutta. The decades after that marked an acute social crisis—the loneliness of the aged. Women, traditionally younger than their spouses, ended up ‘out-surviving’ them. Hence, they had been more susceptible to such loneliness. The current trend seems to have been triggered by a deep sense of rejection of social mores. What’s more, the children, educated and exposed to liberal ideas, are only enc­ouraging their mothers and aunts to go out and party hard. And they are having, even if a bit late, the time of the lives.