After two slow years, rural markets are seeing a resurgence in demand that leaves the urban economy in the dust 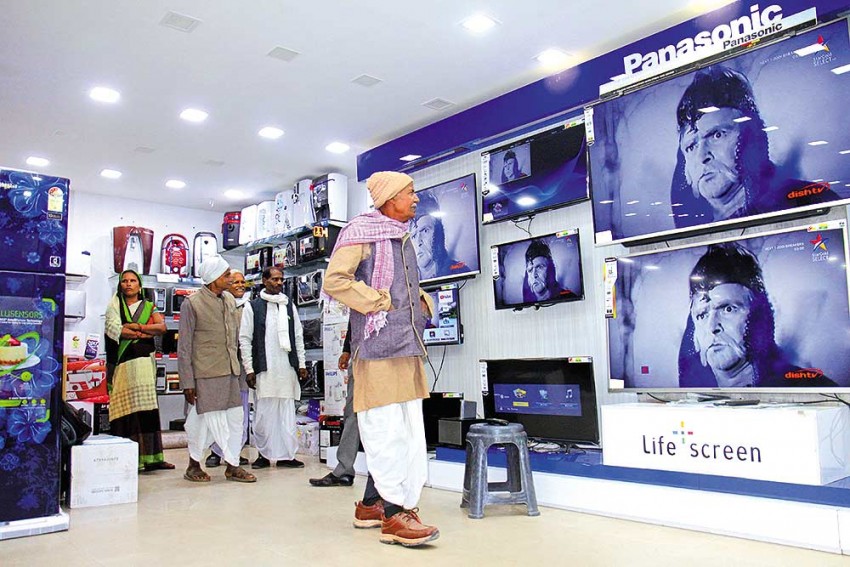 Not Just Browsing
A showroom in a village on Lucknow’s outskirts
Arindam Mukherjee December 08, 2017 00:00 IST The Farmers’ Bull Market 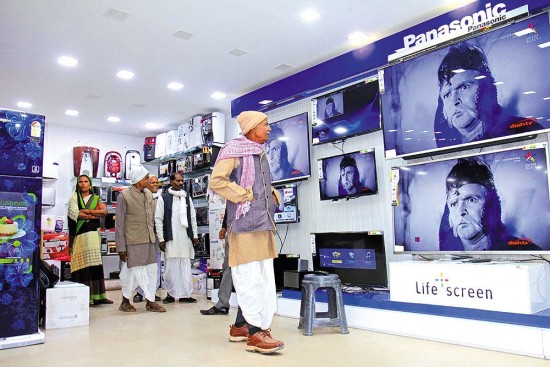 When the Narendra Modi government announced the demonetisation of Rs 500 and Rs 1000 notes on Nov­ember 8, 2016, the Indian rural sector, which was primarily a cash economy, was the worst sufferer. Coming at the end of two years of subdued rural consumption, this hit the sector badly and stymied whatever growth it was seeing. Dem­and was at its lowest ebb and there was hardly any consumption happening as cash dried up.

A year later, India’s massive rural ­sector has hit back. In the last two ­quarters, there has been handsome growth in consumption and demand, and there are signs that this will ­continue well onto the next financial year. While companies have registered an overall growth of five to ten per cent, their rural growth has been in double digits and in the range of 12-15 per cent.

Consumer durable companies, fast-­moving consumer goods (FMCG) firms and automotive manufacturers have all seen robust double-digit growth in rural areas riding on a sound rural push that has happened in the last several months. This compares favourably to the low single-digit ­figures for urban areas where growth, if there is any at all, is stagnating. There are clear signs of a rural recovery across the economy.

Demonetisation had dealt a body blow to many industries that had a rural focus. FMCG, which is primarily cash based, saw flat to negative growth in December 2016. Hindustan Unilever Limited (HUL), India’s biggest FMCG company, saw flat growth in December 2016 and low single-digit growth in the following couple of months. According to HUL CEO Sanjiv Mehta, demonetisation was one of the reasons behind the slow growth in rural areas.

Come 2017, things have turned around for FMCG and other companies thanks to a buoyant rural India. Experts feel that the surge in demand and consumption is primarily due to an increase in the disposable income of rural people. This, many attribute to two years of normal monsoons and a bumper crop last year. Other factors include the government’s market interventions and increase in the minimum support price (MSP) as well as the result of the direct benefit transfer.

Add to that the recent farm loan waivers which left a lot of money in the hands of farmers. Private sector companies have also had a rural focus with urban growth dipping and urban markets bec­oming largely saturated. Most of the FMCG companies have seen rural growth surpassing or equalling urban growth after many quarters.

Says eminent economist and former Union minister Y. K. Alagh, “For the first time, we are providing funds for markets outside the APMC. The newer markets are where the kisan comes and that’s where producer companies are going. These are urbanised rural areas where there is demand. They are now buying cars and all kinds of appliances and gadgets. There is high income elasticity of dem­and in the small cities and rural areas so not just co-operatives but producer companies are going there. This is where they buy the latest TVs, fridges and cars.”

Another cause of the buoyancy in rural markets is a change in the nature of agriculture and the cropping practices of farmers, namely a shift from food grains to other cash crops. Says economist D. H. Pai Panandikar, “When we think of agriculture, we think only of food grains. Now this has changed to fruits, vegetables and fish, the prices of which have been on the rise. The share of these other crops is now 55 per cent, while food grains have dropped to below 40 per cent. So farmers are shifting there and earning more. This new trend also goes well with the government’s aim of doubling farmers’ income in five years.”

The biggest sign of a rural revival is when two-wheeler sales see good growth. In the last two quarters, most of the two-wheeler manufacturers, including Hero MotoCorp, Honda, and TVS Motor Company, have seen robust double-digit growth in rural areas even as urban ­dem­and sagged. “We have witnessed growth of over 20 per cent in retail ­volumes over Diwali and Dussehra.  The rural aspirations across most parts of the country are on an upswing with decent monsoon and increasing disposable ­income,” A TVS Motor Company spokesperson told Outlook.

In the July-September period, consumer durables and automobiles saw brisk sales in rural India. This, many att­ribute to good monsoons this year, which led to a good harvest and more income in such areas. According to market estimates, rural sales for Indian industry grew by 13 per cent in the per­iod against the same period last year. Compared to this, growth in urban areas was just four per cent in the same period. What is more heartening is that this is the second successive quarter of double­-digit growth in the rural areas, primarily for FMCG and consumer durable companies. About 40-50 per cent of all sales of all FMCG and consumer goods companies today come from rural areas.

Says Dhanraj Bhagat, partner, Grant Thornton India, “The increase in rural demand is because of  a good monsoon this year, which is very positive for the agriculture sector. Because of this, there is an upswing in demand this year. Even people serving the agricultural sector like those in farm equipment have seen very good performance. Overall the agricultural industry has fared better putting more income in the hands of farmers.”

Not only this, he says, there is an inc­reasing trend of companies focusing their marketing towards rural areas looking at the increased demand there. In addition, many e-commerce companies are also focusing there, giving rural people increased access to a lot of FMCG and other products which are being del­ivered to their homes. Samsung India, for instance, has a special focus for its mobile phones and consumer electronics in rural areas. The company has divided rural India into more than 80 zones where it is concentrating its marketing efforts. Companies have also increased their direct distribution in rural areas. According to industry estimates, white goods, which saw a growth of about 10-12 per cent in the last quarter, grew by almost 17 per cent in these areas.

Maruti Suzuki grew by 22 per cent in rural areas last year, one of the ­highest growth rates seen in recent times.

Another example is the Indian automobile industry, which has a special focus on the rural areas and has seen brisk sales in the area in the last two quarters. This is evident from the fact that India’s largest car manufacturer Maruti Suzuki has seen a high 22 per cent growth in sales in the rural areas this year, which is one of the highest rates seen in recent times. Growth in rural areas was much faster than in urban areas, Maruti Suzuki told Outlook. Other automotive companies like Hyundai Motor India, Hero MotoCorp and Mahindra have also seen a similar trend. Most of the companies expect double-digit growth going into next year riding on high rural exposure coupled with the pattern of normal monsoons and a bumper harvest.

Perhaps the best harvest in rural areas has been for FMCG companies who have seen good double-digit sales growth in the last two quarters in such regions. Says Lalit Malik, chief financial officer, Dabur, “We saw double-digit growth of 12 per cent from rural areas. Close to 45 per cent of our revenue today comes from rural areas. We have taken a 50:50 split on many business lines to push the rural market and enh­anced our portfolio in the rural market. In the last two years, rural growth was low in the single digits. That has changed. That is because there has been a lot of government support and infrastructure development. Bank accounts have been opened and subsidies have started flowing into rural areas. This is impacting it positively.” 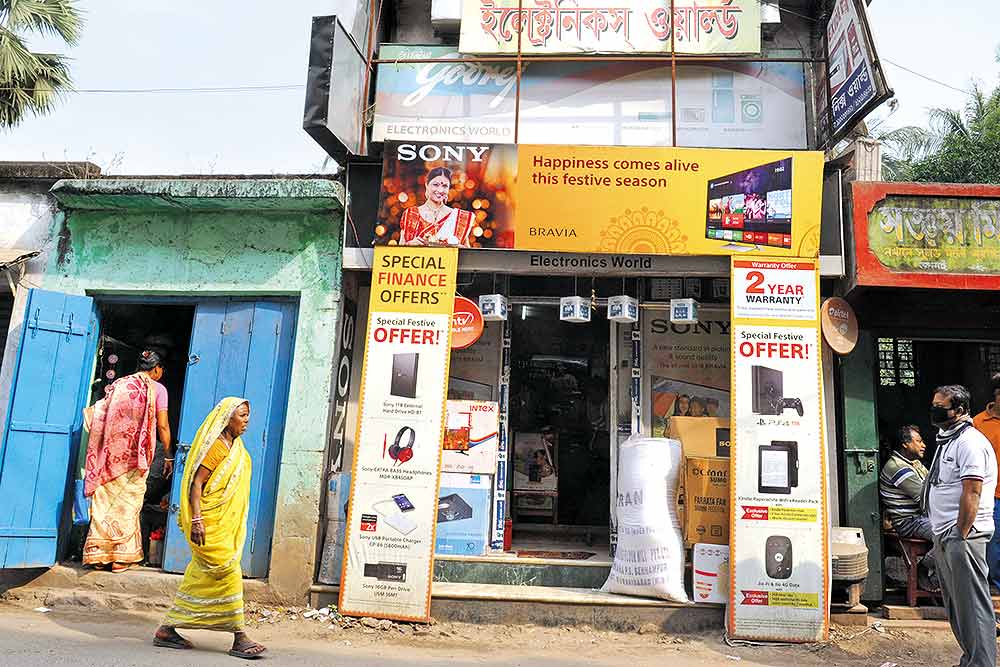 Advertisements for electronic goods in a West Bengal village

According to reports, in the second quarter of this year HUL recorded a 10 per cent sales growth. While the company said it does not provide the break-up of rural and urban sales, it is understood that a significant part of that growth was rural led. Over 40 per cent of HUL’s sales come from rural India.

Other like Emami have also rested their hopes on a big rural growth this year. Says Harsh Agarwal, director with Emami, “Rural has always been a high-potential area for us. In the last two years the market for FMCG was not growing here. But now there is a clear trend of growth in both urban and rural areas. Rural is higher and things are normalising here. The growth rate in rural areas has always been higher for FMCG companies. The rural market is also changing. From products like hair oil, soaps, toothpaste and creams, the market is gradually opening up to Deo and face wash, which formerly had 80 per cent of their market in urban areas.This is changing rapidly and resulting in growth for FMCG companies.” According to market estimates, Emami saw a 10 per cent growth in sales in rural areas while its urban sales were 5-6 per cent.

Firms will focus more on rural markets in future as most demand growth will come from such areas.

There are other fundamental changes happening in rural areas which are resulting in growth for companies. Says Anil Talreja, partner, Deloitte India, “We have noticed that the income earning capacity in rural India has undergone a change. The standard of living in smaller cities in changing and there is actual movement of white goods into these areas. Last Diwali there were more sales of refrigerators in rural areas because they are no longer a luxury product. It is similar to what happened to TVs some time ago. Many of today’s rural areas are no longer rural markets. There is internet penetration, and awareness is high. Add to that schemes that provide EMI options which are suddenly bringing in affordability in rural areas.”

Market experts feel that in the future, rural markets will secure a more prominent place in the perspectives of companies as most of the demand growth will come from there. Says Bhagat, “Going forward this upward trend is expected to continue in the next quarter, and the  Union Budget, which is scheduled for February 1, is expected to be more populist with incentives for the agriculture sector. The growth in the rural sector is expected to continue for some time led by the good performance of agriculture.”

Others like Talreja feel that once issues related to GST are cleared, it will open up further growth in the rural areas. He says, “We are passing through a speed-breaker called GST. Once we are done with it, this growth will intensify.” With urbanisation of rural areas, their habits and consumption patterns have started mimicking urban areas, resulting in high growth rates there. Rural markets are no longer soap-and-toothpaste markets, but are providers of modern gadgets and appliances. With urban growth saturated and slowing down, Indian manufacturing is hopeful that rural India will come to their rescue in future.