Air-kissing has arrived as a social greeting. The handshake is so last century and the namaste is solely the reserve of prudes. 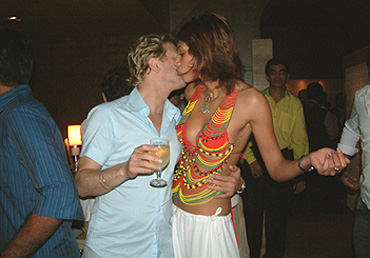 outlookindia.com
-0001-11-30T00:00:00+0553
In Page Three, film director Madhur Bhandarkar's potshot at the world of celebrities, two chauffeurs wonder aloud at the readiness with which their employers air-kiss everyone at a party. "Yeh hawa mein kiss kyon karte hain?" one asks the other.

Now, even Bhandarkar, the man with the outsider's perspective, routinely finds himself compelled to air-kiss because "it's the norm in the high circuit". And never more so than during the Christmas-New Year party season, when you can scarcely draw breath without inhaling a lungful of chummas.

No matter that the air-kiss is about as authentic as a Louis Vuitton handbag hawked outside CST station, everyone's puckering up these days, from fully paid-up members of the Page 3 club to young, urban wannabes and earnest never-will-bes. The air-kiss has arrived as the social greeting de rigueur.

The air-kiss is, as adman Prahlad Kakkar puts it, "a tribal ritual, a Page 3 phenomenon". That's where it all started, after all—at fashion weeks, film award nights and art launches, where fashionistas, movie stars, art aficionados and other pretenders could project a pseudo-warmth for other people. "It's a fake gesture," says fashion choreographer Achla Sachdev. "Your make-up stays, my make-up stays, I've said my hi, now bye-bye." 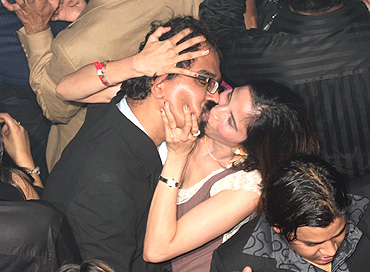 Here's a quick how-to if you're not in the groove. Air-kissing is kissing as a non-contact sport—pursing the lips as if to kiss, but touching only cheek-to-cheek or ear to ear. You approach the other person with your arms open and grasp their arms or hands. Then you gently brush your cheek against his/her cheek, typically first right, then left. "If I didn't air-kiss in a party full of people, I would be stuck in the loo all the time, redoing my lipstick," says model Nina Manuel.

Air-kissing is as Indian as a bottle of Moet or the bikini, which explains, in part at least, why it's such common currency among the la-dee-dah lot. It's imported, after all, phoren maal, so to speak. The Italians kiss twice, first right then left; and the Spanish and Italians like their busses in twos, too. The Russians, Dutch, Belgians and Poles want no less than three. The French, being French, are all over the place and might insist on even four, depending on which part of France they are from. One is fine, thank you, for the Americans. And now the Indians are doing it. 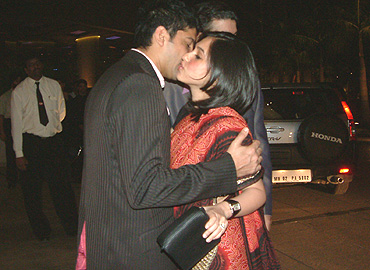 Observes sociologist Shiv Visvanathan. "We no longer take all body relationships to be focused around sexuality, and the air-kiss allows for various nuances, from familiarity and friendship to coquetry, nuances that we only explored earlier while singing and dancing."

Permissive as it seems, the air-kiss is limited to the chattering classes and the young, adds Visvanathan. In those airy circles, greeting someone without damaging your make-up and enduring the tedium of making real conversation is classic protocol. The handshake is for has-beens, the namaste is for prudes.

The air-kiss also projects a sense of cool among the hip and the happening. As Kakkar puts it, "When they air-kiss, it is as if to say we don't need to be formal, we're friends, and we can actually make physical contact."

Progressive and chilled-out it might seem, but the air-kiss still has, well, a few rules of engagement. Air-kissing among men is a strict no-no; a macho thump on the back or a half-hug is more acceptable. "If you have smoker's breath, and drink heavily, carry fresh mints if you're planning to air-kiss the whole room," advises Rukshana Eisa, Mumbai-based grooming and etiquette consultant.

In a man-woman interaction, it's the woman who initiates an air-kiss because, as Kakkar laughs, "most men don't have the balls to make the first move. " But when a man leans forward to air-kiss a woman, he tells everyone that he knows her well enough to take such a liberty.

The air-kiss is also possibly the first step in an elaborate courtship dance, because it gives a man and a woman their first opportunity to get close enough to explore a possible relationship on an inarticulate level. "For a woman, it's a chance to see up close whether the guy's socks are so old that the elastic is loose and wrapped around the ankles," chuckles Kakkar. "And for the man, it's an opportunity to make sure that the woman doesn't have smelly underarms or a rancid bra-strap."

Hmm...so even something as air-headed as an air-kiss can be decoded? P3Ps swear they can tell what two people really feel for each other based on how they air-kiss. "When there's no eye-contact, no warmth of facial expressions, and you are air-kissing someone but looking clearly past him or her to check out who else is in the room, what you are really saying is, 'You're my party friend, I'm not really that interested in you and I'm looking for someone more interesting while I air-kiss you'," suggests Eisa.