To rein in a rampaging Mayawati and revive the BJP's sagging fortunes, is it back to old hand Kalyan Singh? 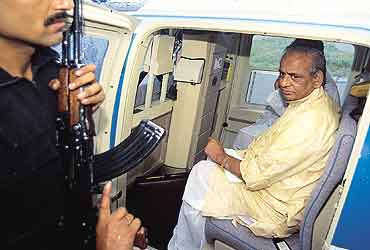 outlookindia.com
-0001-11-30T00:00:00+0553
Will there be a homecoming for Kalyan Singh, once BJP's most powerful chief minister in Uttar Pradesh? Contrary to reports that the BJP-Kalyan patch-up bid has failed and that the latter will be part of a possible Congress-Samajwadi Party (SP) front, highly-placed BJP sources told Outlook that the return of the prodigal is being seriously pursued by both sides.

Sources close to Kalyan and the BJP believe that the media threw a spanner in the works. Three days after the five-hour meeting between Kalyan, president of the Rashtriya Kranti Party (RKP), and three emissaries of the BJP—Rajya Sabha MPs Dinanath Mishra and Balbir Punj, and rss ideologue S. Gurumurthy—the news was leaked out in Lucknow. Subsequently, Kalyan was cornered by the press. He understandably denied any possibility of returning to the BJP. And when asked whether he still stood by his views that the "central government is run by retired officers and a tired leader", he replied with a tactless "yes". Kalyan later told BJP leaders that the "words were put in my mouth". Clearly, the man is keeping all his political options open.

Outlook has also learnt that a dialogue with Kalyan was cleared by the "entire top BJP leadership". Moreover, even after his alleged remarks about the PM, Kalyan came to Delhi where he met two other prominent BJP leaders from UP, Kalraj Mishra and Lalji Tandon. Kalyan also called on Dinanath Mishra, who was undergoing a check-up at the Ram Manohar Lohia Hospital. Without divulging details, Dinanath Mishra confirmed "Kalyan made a courtesy call lasting 25 minutes".

So what's cooking? Several BJP leaders have been informally in touch with Kalyan since last year. Matters acquired a certain urgency last month as Mayawati became more aggressive. And it is only too apparent that the BJP is gradually losing a lot of political space in UP.

The influential BJP speaker of the UP assembly, Kesri Nath Tripathi, has been particularly active behind the scenes in initiating this dialogue. Outlook sources reveal that some BJP leaders have been talking to Kalyan for over a month now, that is, before the news leaked out last week. 'News' of the visit of the three emissaries, who stayed at Lucknow's Arif Castles Hotel, appeared to have drawn public attention to the ongoing parleys.

It's not difficult to see that both Kalyan and BJP stand to gain from a possible rapprochement. Kalyan used to be the most prominent OBC face of the BJP. Since his exit, the party's fortunes have gone drastically downhill in UP. Moreover, the RKP won only four seats in a 403-member assembly. But, conversely, Kalyan did act as a big spoiler for the BJP and adversely affected their results in 43 seats in the assembly elections. In that sense, he was useful for Mulayam Singh Yadav.

Indeed, one of Kalyan's major worries is how to extricate himself from Mulayam's grip. His colourful associate, Kusum Rai, is an MLC with the support of the SP. Kalyan is reportedly worried about her future should he return to the BJP. Will BJP leaders be willing to tolerate a woman they consider responsible for Kalyan's problems with the party?

There's also a debate on whether, paradoxically, it is in Mulayam's interest to let Kalyan return to the BJP. It would immediately strain the BJP-BSP alliance and could lead to the collapse of the Mayawati government. Even if the alliance does not collapse, Mayawati will, at the very least, have to cope with a more assertive BJP.

Meanwhile, there are many upper-caste UP BJP leaders working to sabotage Kalyan's homecoming. Surely, Rajnath Singh would be rendered irrelevant if Kalyan takes charge of the party in the near future. The faction close to Murli Manohar Joshi is also strongly opposed to Kalyan. But sources say it would be a mistake to assume that Vajpayee would oppose any move that would be good for the party in an election year."It will have to be done in a way where Kalyan comes up with an explanation resembling an apology to Vajpayee," says a BJP leader. Sources add that the "bring back Kalyan" initiative could not have taken place in Lucknow, Vajpayee's constituency, without his knowledge.

The scenario is as complicated as the state's messy politics. Says Punj, "The future is pregnant with possibilities." Now to see what it delivers.