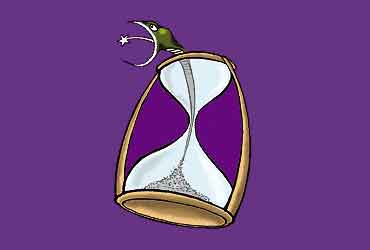 outlookindia.com
-0001-11-30T00:00:00+0553
William Dalrymple has hit where it hurts the most: the unchronicled history of the Hindus, their amazing quality of forgetfulness and scourge of disunity. When V.S. Naipaul points to these areas of darkness, he speaks as one of us. But Dalrymple looks no different from other white Mughals or their munshis for whom India is no more than a mass of koi hai people and places to be enjoyed, ruled and to write memoirs about. As stinking and rude as Macaulay's pen, Dalrymple wants to convey two things—(a) Sir Vidia has fallen because he came to the bjp office; and (b) his lament on the fall of the great centre of Hindu civilisation Vijayanagara is meaningless, because, like Godhra, this too was either a case of self-destruction or an inconsequential mark in the long history of Hindu-Muslim brotherhood epitomised in the Islamicised clothing of the Vijayanagara kings. Then, he goes on to quote western scholars and juxtaposes the great peace missions of Ajmer Sharif and Nizamuddin Chishti, who to many noted historians were nothing more than 'scouts and guides' to the invading 'ghajis' only to be rewarded at the end of the invasion.

To him, creative harmony means 'Hindu kings' wearing Islam-inspired costumes (whatever that means), a Muslim sultan using a rudraksha rosary. Why did he forget to mention other examples of such harmony? Like Akbars marrying Jodhabais and mosques on the razed Hindu-Jain temples like Qutub Minar and Kashi? Kashi could be the best example of such Hindu-Muslim brotherhood where we can see the great Islamic structure dancing over the lotus designs of the erstwhile Shiva temple. No digging required to get proofs of such milk 'n honey relations, he could very well have concluded with 'Christianised Indians'—as most of them today wear Christendom-inspired costumes like pants, shirts and ties. Now, the problem for us 'conflict-inviting' bad Hindus is, where do we put the so-called (for Marxists and gora munshis like Dalrymple) martyrdom of Guru Tegh Bahadur, two sons of Guru Gobind Singh or Ghallu Ghara? Like white Mughals and their whiter masters, 'black' and 'copper' Mughals too ravaged, raped and enjoyed the local bounties of the battles. Some Indian Dalrymple is needed to chronicle their pains and anguish. What about the stories of Chittor's jauhar and Padmini's tryst with fire? All cooked up? Dalrymple also forgot to mention why despite such a 'glorious' example of sweet relations with Muslims, the destruction of Vijayanagara never found even a cursory mention in the unending stories of R.K. Narayan?

Hundreds of examples can be quoted from books by Muslim scholars on how every Muslim invasion was a part of Islamic jehad. Refer to Tarikh-i-Firishta translated by John Briggs as History of the Rise of the Mahomedan Power in India, first published in 1829 (Vol 1, pp 27-28).

Sultan Ahmad Shah Wali Bahmani (1422-1435 AD) conquers Vijayanagara. "Ahmad Shah, without waiting to besiege the Hindoo capital, overran the open country and put to death men, women and children wherever he went. Whenever the number of slain amounted to twenty thousand, he halted for three days and celebrated the bloody event. He also broke down the idolatrous temples and destroyed colleges of the Brahmins." No literature is required to show the brutal destruction of the temples by 'ghajis' and 'butshikans'. Yet, Dalrymple and his cartel would portray them as mere local feuds over financial gains. This is what the white Mughals do to their ex-colonies. And there never will be any dearth of 'supporting quotes'. After all, the East India Company thrived not on the Britons' valour, but on the cowardice of the colonised natives. They will never accept R.C. Majumdar, Jadunath Sarkar, Sita Ram Goyal, Sri Aurobindo or even Vivekananda. Their sources will always be in the hate-India pits of the Marxist dens.

Despite some rare examples, the stark truth is that invaders brought loot, rape, plunder and the spread of Islam in 'one package'. It has continued till this date and our times are also witnessing the rape and killings of Hindu women in J&K and Bangladesh at the hands of Islamic zealots. But Dalrymple and his Marxist cartel of Romila Thapar, Satish Chandra or Nurul Hasan would weep at a distant Palestinian sprain rather than feel the pain of the Hindu neighbour. Naturally, they feel peeved at Sir Vidia's plainspeaking. I wonder why Rushdie's piece about it hasn't appeared yet.

It is the great sagacity of the Hindu heart that despite such continuous trails of Islamic barbarism, we have never treated Muslim society as a dushman of our land or dharma. Rahim, Raskhan, Jaysi, Taj Bibi, Ghalib remain on the most respected pedestals of Hindu reverence. The Khans are ruling Bollywood and a Muslim is our head of state. He may well prove to be the most popular head we ever had. We fought together under Bahadur Shah Zafar and none lamented. Dalrymple should not be worried about good Hindu-Muslim relations. After all, neither Raskhan's position in common Hindu households nor the Khan era in the same Bollywood where once Muslim actors had to adopt Hindu names was because of the efforts of Dalrymple's ilk. Instead, it was because of the inherent Hindu sense of goodwill, even for those appallingly hateful. It's different from the culture Dalrymple belongs to. Therefore, he should confine himself to his patriotic concerns.

In short, leave the Hindus to their pain and sorrows for our coming generations—who would surely rise soon with a better spine than we see today.


Tarun Vijay is the editor of Panchajanya.