The Emotion Of Smell

outlookindia.com
-0001-11-30T00:00:00+0553
Smell
By Radhika Jha
Viking Rs 395, Pages: 290
Asmell is world...it is memory too." A promising phrase that occurs in the middle of the novel, as its heroine, Leela Patel, struggles to articulate her sense of the world to two Occidental masculine listeners. What Leela can't convey is the intimacy, the very private nature of a personal world of intense smells that delve beneath the commonplace to reveal the subterranean world of darkly pitted desire, of a bloodless nameless fear, of being a citizen of no country in a world where one's nationality is one's individual watermark.

Which brings me to the core of the novel's problem: the betrayal of reader expectation that stray phrases such as the above one raise. Jha's novel is original in its central conception: the granting to her heroine the gift/curse of smelling her way through her world. Leela Patel, a Gujarati of Kenyan birth, finds herself cast adrift at the critical age of 18 in a Parisian wasteland. Emotionally abandoned by her mother after her father's death in Kenyan race riots, forced to make a frightening journey to Paris alone (her mother goes with the younger boys to London), Leela's at the mercy of the uneasy charity of an Uncle and Aunt who use her alternately as household drudge and unpaid clerk. In this, the first section of the five-part plot, Jha displays a sureness of touch as she sketches a Rabelasian world of sights and smell, as Leela's Gujarati vegetarianism is soon subsumed under the rich aromas and heavy sensuality of a flesh-eating family. Meanwhile her gargantuan Aunt, in a bid to make Leela more useful-as a cook-unlocks the world of smells to her. Now, Leela's marked by her uncanny ability to translate smell into emotion. Thus frying onions become the smell of death, the incorrect spicing of chicken curry a war of contentious desires.

But unfortunately, Jha soon abandons this and moves on to the central pattern of Leela's life: repeated abandonment by family, friends, lovers, leading to the near annihilation of Leela's self-respect and identity. The problem largely lies in Jha's plot choices. Smell remains stilted because yoked to the coming-of-age plot is the post-colonial narrative of exile and marginality. A burden that Leela's unformed, hesitant vision can't bear with success. More so as Jha chooses a monochromatic lens to convey Leela's musings on her bewildering Parisian environs, her memories of an idyllic Kenyan childhood, and her immense dislocation in the world into which she's thrust unwillingly.

Leela, for all she could've been, given her olfactory powers is reduced by her creator to an exotic Sex Goddess. Moving from one sexual encounter to another with a range of men who use her for the pleasure her perfect, Khajuraho-sculpted body gives them, Leela soon loses the reader's interest. Worse, after a point, there's no empathy with the dark forces that drive her as she struggles to escape her fearful secret, "a dark feral smell" emanating from her body.

What works best are thus not the many sequences devoted to Leela's amours, the laboured details of her lovemaking, the repeated abuse she suffers with men in her orbit, but the memory that lurks within her. Her culinary skills that travel unchanged, even honed and sharpened, into the new worlds that her body opens up to for her. It is when Jha describes the way Leela cooks that the novel achieves an authenticity and passion that the conventional story of innocent abroad does not ever quite achieve.

Read as a movable feast, as an Indianised, post-colonial recasting of Hemingway's Parisian classic, the novel scrapes at the edges of the reader's memory of how the inner life of an alien world can be so richly translated into vivid, speaking images. In Jha's hands, however, the smell that promised a reader unknown delights never makes it beyond the homegrown pleasures of the taste of the known, the imagined: memories of fiction drunk, eaten and digested. 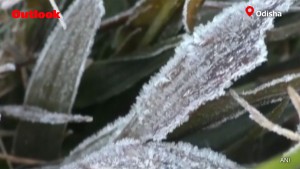