Pandya's murder has inspired the despondent dissidents to fight back Updates 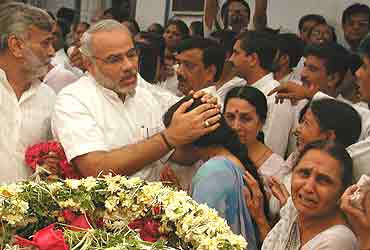 In life, former Gujarat minister Haren Pandya was a headache for Narendra Modi. In death, he seems to have become a cancer that is spreading through the state BJP, an organisation that Modi has so far bossed over unquestioned. Five months after Modi led the BJP to a huge electoral victory, the dissent within had been quelled, except for the solitary voice of Pandya. But with his daylight murder in Ahmedabad, Modi-baiters in the BJP are back in business.

And when deputy prime minister L.K. Advani ticked off Modi publicly at the condolence meeting for Pandya in Ahmedabad last week—saying it was a mistake not to have let Pandya contest from Ellisbridge—it was green light for all those dissenters who'd thought the battle was already lost. Says a party MLA: "Modi has very little real support. Most of us are much too scared of him. When Advaniji spoke out, it seemed there is a light at the end of this terrible tunnel."

It did not take long for insiders to sound out the media that the rumblings of disenchantment had begun. There has been talk of 60 MLAs forming a lobby, with tacit support from Keshubhai Patel and Pandya's friends. Keshubhai, of course, denies it. But much is being made of his camping in Delhi last fortnight and his meetings with top BJP leaders. Besides, his condolence meet speech was loaded.

Those opposed to Modi within the state unit say they feel helpless, given the autocratic style of his functioning. Suddenly, the sleeping dissenters in Gujarat BJP seem to be wide awake and there is talk of all those instances in recent times when BJP MLAs had to face the brunt of the arrogance of a handful of pro-Modi ministers. "He and a couple of his close ministers just don't listen to us," says a Saurashtra MLA who recently had his first brush with Modi's confidante, Anandiben Patel. The MLA had gone to the minister with the transfer case...