'The EC Has Disenfranchised 30 Per Cent Of My Voters'

Image to media ke ch***ya hamara kharab kiye hai. (A****les from the media have spoilt my image), says the railway minister, in a most expletives edited interview. 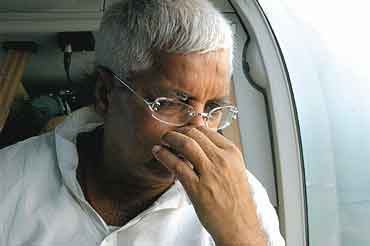 outlookindia.com
-0001-11-30T00:00:00+0553
Laloo Prasad Yadav has always accused the media of ganging up against him. But this time round, his anger is more personal. Saba Naqvi Bhaumik spent a nerve-wracking hour with him during which he blasted her for "turning against me" and "joining up" with his enemies. "I took you around in the last election, but you still wrote against me," he complained. He got particularly abusive when asked about Congress duplicity: "They have filled bhoosa (garbage) in your brain. Who are the people you are talking to? This is the line put out by my enemies." After freely using Hindi swear words against the entire media, he calmed down, adopted a somewhat apologetic tone, insisted on offering ghugni and tea and invited her to accompany him on the campaign tour. Most expletives edited, excerpts from a conversation with the Union railway minister:

Are you changing your image? There are no jokes, entertaining speeches.
Image to media ke ch***ya hamara kharab kiye hai. (A****les from the media have spoilt my image). Most people in the media have a BJP/RSS agenda. They say Laloo is a joker, a clown. This is the class of people who want to make fun of me and still they run after me day and night.

You are not happy with the EC?
The man in charge of the EC has a publicity bimari (illness). K.J. Rao wants to see his face in the paper everyday. Look at the incident involving the brother of Jai Prakash Yadav. Do you think the police would have caught the brother of a Union minister by the hair and thrashed him if he had been a high caste? If Jai Prakash had not got his brother released, 10,000 people would have burnt down the thana. There would have been a riot. But the media will not write about this, they will not write that central forces have indulged in the mass rape of women in Begusarai. Do you know that every Muslim, OBC and Dalit officer has been moved out of Bihar by the EC?

Angry with both the media and the EC?
Nafrat hai media se (I hate the media). And the EC is trying to finish off democracy in Bihar. You think I don't want free and fair polls? Every time the EC gets after me, my supporters come out for me. This time they have disenfranchised 30 per cent of my voters. That Rao is insulting Bihar when he says it is more dangerous here than in Kashmir.

So everyone's against you?
There's a whole class of people who lost their gaddi (chair) because of me. They have been trying to get me for years. I am fighting them alone. They say I keep criminals. But all the mafiosi are with Nitish. I am here only because of the voter. Otherwise, do you think I would be standing here?

Are you keeping your brothers-in-law out this time?
Even in the last two phases, I will not be giving tickets to their wives. But the media trashes my whole family. They say Rabri Devi is so scared of losing Raghopur that she will stand from another seat. Lies. My teenaged son accompanied his parents a few times and they say I am projecting him as my successor. He is in school but the media goes on and on.

You are angry with the media. Yet there are reports that you have hired a publicist in Delhi....
Again, all lies. I know my image will not change. It will remain as it is. There is no need for make-up, denting or painting. (Names a Hindi publication, uses expletives, says he will thrash the journalist). The class that controls the media is against me, so there is no point talking to them. But they have no impact on my voter. The RJD is the only party that issues no advertisements. It makes no difference. I have realised that there is no point in exhausting my energy on the media. They will send me to hospital.