The white revolution may fall victim to an ongoing drought 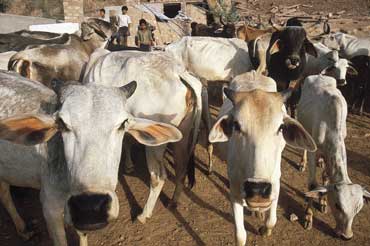 outlookindia.com
-0001-11-30T00:00:00+0553
Come summer and a large part of the nation, particularly its northern and north-western parts, may experience an unprecedented shortage of milk. Thanks to the continuing drought conditions and water-table depletion in six states, cattle fodder has become scarce. And cattle stalked by death and disease means milk of low volume and quality.

In a recent presentation to the department of animal husbandry and dairies, the drought-hit states sounded an alarm for the future of the white revolution. In Rajasthan, Andhra Pradesh and Gujarat, the Anand-based National Dairy Development Board (nddb) branches have received several complaints on how the water crisis in their respective regions is directly reflected in the low milk yield, its substandard quality and widespread adulteration (using ice to increase the volume and mixing powder to increase thickness).

Says R.S. Gill, managing director of Rajasthan Cooperative Dairy Federation: "The level of water is fast depleting here. If water is scarce for people, how can the cattle get it? Several have perished and we're trying to draw up an estimate. Green fodder is scant and we're trying hard to scout for dry fodder. The problem will become acute in March and there's no solution till the rains arrive." Adds M.P. Bansal, MD, Haryana Dairy Cooperative Federation: "It's a serious problem in districts like Sirsa."

It's not a temporary crisis. One of the few distinctions India enjoys is of being self-sufficient in milk—it's the largest milk producer in the world. That distinction may be short-lived unless urgent steps are taken. The ministry of agriculture has estimated that the country may face a shortfall in milk supplies by around 20 million tonnes per year in four years' time if the water crisis continues. Milk production rate is slowing down—from 7.1 per cent two decades ago to 4.1 per cent—even as production increased from 31.6 MT in 1979-80 to 79.1 MT in 1999-2000.

"The government doesn't have any information on cattle deaths in drought-hit states. But the situation is alarming. We are coordinating with nddb and private producers for dry fodder supply and other alternatives," a senior ministry official said. However, he added, it'd be wrong to blame the crisis on drought alone. "India has just 4 per cent area for fodder cultivation. One crore of livestock is added every year. Water is a serious problem. So are veterinary problems (India needs 400 million doses for its cattle but currently has stocks for only 40 million). Even scientific advisor A.P.J. Abdul Kalam made this point in his note to the department of science and technology."

Not just the cooperatives, even the World Bank had issued a dire warning on water overuse. Says R.K. Pachauri of the Tata Energy Research Institute: "There is no short-term solution to the crisis. Rushing tankers may help people but not the cattle." And even while urban areas are assured of their milk bags, rural regions may be sacrificing their share. A joint study, 'The White Reality, on the Indian Milk Economy', by Initiatives, a Mumbai-based think-tank, and the Nasik-based Purushottam Academy claims that availability in the rural areas is only 121 grams per person per day, barely half the minimum nutritional standards prescribed by medical experts. As a result, about 75 per cent of children below three years of age, for whom milk is a vital nutritional input, suffer from anaemia and about half of children below five years of age are malnourished.

The study also laments the adulteration in milk and lack of hygiene. About a third of the 1,100 consumers interviewed reported sickness due to adulterated or unhygienic milk in the recent past. The study adds: "The condition of dairy farmers is worse. Most don't account for costs of labour and fodder while calculating their income. If included, an average of 82.5 per cent would be making losses. Even in the best of circumstances, at least a third of the milk producers are forced to make losses due to low prices, high costs and low yield. Due to low profitability, dairy farmers don't invest in hygiene. The average income is below Rs 1,000 a month. As compared to this, an average adulterator in Mumbai earns approximately Rs 1 lakh a month."

Clearly, the country needs a visionary in the mould of Verghese Kurien to keep the white revolution going.