The Hindujas finally present themselves for questioning, but will it help the case go ahead? 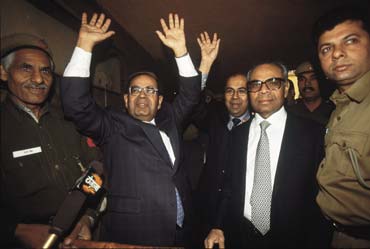 outlookindia.com
-0001-11-30T00:00:00+0553
During his four-day, nearly 15-hour interrogation at the cbi headquarters last week, Srichand Parmanand, the eldest and most venerable of the mighty Hinduja brothers, narrated a homily to his interrogators. "My janam kundali says I will make a lot of money from white men and spend it here in India." Does it also say just where you will spend the money? persisted one investigator. "It could well be the account you have in mind, except the money did not come in for the howitzer guns," Srichand Parmanand replied. SP also told his interrogators that heads of governments did not respect the Hindujas because of how much money they have, but due to their long-standing goodwill and professional conduct. The question is: just how much of this is bluster?

A crack cbi team comprising joint director B.R. Dubey, dig O.P. Galhotra and dsp Keshav Mishra, all old sweats on the Bofors beat—which is now nearly a decade-and-a-half old and still nowhere near the trial stage—put the bait again and again. Why did you block the transfer of papers to India? Far from it, replied SP. According to him, despite their full cooperation, a section of the Indian media had got in touch with Swiss authorities "to create confusion and impediments in the transmission of documents from Switzerland to the court of the special judge" (cbi).

For a family long used to being dined and feted by prime ministers, heads of state, royalty and other celebrities, and whose collective worth puts them among the top 15 rich families of the world (making them the most well-connected Indian enterprise in the world), the week spent at the cbi headquarters in Delhi was far removed from the world they are used to. Well-placed sources say the examination of SP and brother Prakashchand Parmanand Hinduja, despite being severe in stages, was conducted in good stead (third brother Gopichand's questioning was scheduled on January 27). Quite unlike the time when an Indian team went to London in 1991 to question the brothers. "Then, we were made to feel like the accused," recalls an officer who was part of that team, which spent some terribly uncomfortable hours with the brothers. "Before we could question them, they informally queried us."

According to the details of the latest interrogation, the Hindujas stuck to their guns: they explained the nature of the receipt of amounts; said they had no links with the gun contract; that funds have remained within the group; and most importantly, no payment was made to any Indian politician or public servant. Did they get money from AB Bofors? Replied S.P. Hinduja: "We have had a long-standing commercial relationship, since 1974, with the Nitro Nobel group of which AB Bofors is a member. The payment received refers to global commercial transactions between Bofors and ourselves, and there has been a deliberate attempt to link them to the gun deal for political reasons.''

Both SP and PP tried to impress upon the agency sleuths that they had attended the court voluntarily and submitted themselves to the judicial process "as we desire to clear our name and reputation". According to them, since the 'court process' had not yet been served on them, they would have been legally justified in not attending the court. They also said that they had submitted themselves to the cbi voluntarily for a daily interrogation routine, ending on January 30, unless the cbi seeks more time for examination from the special court or the brothers move an application before it to allow them to travel abroad.But cbi officials say they are not convinced by the Hindujas' argument—made repeatedly during the interrogation—that the payments came from another Bofors deal. The investigating agency is sticking to its case that the money came from the Bofors gun deal. The cbi's case rests on the following:

Just what is the politics behind the Hindujas making an appearance at this late stage amidst media speculation that a 'deal' had been fixed between the brothers and the ruling coalition? Investigators say all this is mere speculation. "The case is in the courts, how can there be a deal?" questions an official. But others are more circumspect. Says Prashant Bhushan, lawyer and author of a bestselling book on Bofors, "Though the Hindujas are here for questioning, their clout with the present government should not be underestimated. Don't forget that the Attorney General of this government, less than two years ago, was giving advice, unethically and against rules, to the same Hindujas on power projects." Analysts say that despite the grip the cbi has over the Hindujas right now, thanks to the Swiss bank documents and the expose carried out by The Hindu newspaper in the '80s which linked the brothers to the Bofors payoffs, the future course of the case depends on how the agency frames charges. They say that if the case is linked to charges of bribery paid to public servants, then there is a chance of its moving forward, but if it is made out to be a case of cheating the public exchequer, the case is as good as lost.

The Hindujas—who quickly left for the Mahakumbh for a dip after yet another day of examination last week—are said to be more concerned about the outcome of this case and its fallout in England amidst the resignation of a British minister for allegedly 'helping' one of the brothers acquire British citizenship. Says a source close to them, "It is a question of choosing the lesser evil.Staying on in England while charges fly thick and fast would have damaged their reputation beyond repair. It made better sense to come to India, even to face a cbi interrogation, and attempt to clear the air. At least they have something to show for a 15-year-old case."

The remaining days of the interrogation could prove important. No one connected with the case has been arrested in India. Neither former Bofors agent Win Chadha nor the Hinduja brothers. Maybe, chuckles an investigator, that's giving Ottavio Quattrocchi an idea or two. For, all the Bofors scam now means is coming to Delhi and 'clearing the air.'