The Sania-Shoaib-Ayesha affair had the nation transfixed. How did old-world Hyderabad take to the whole mess? 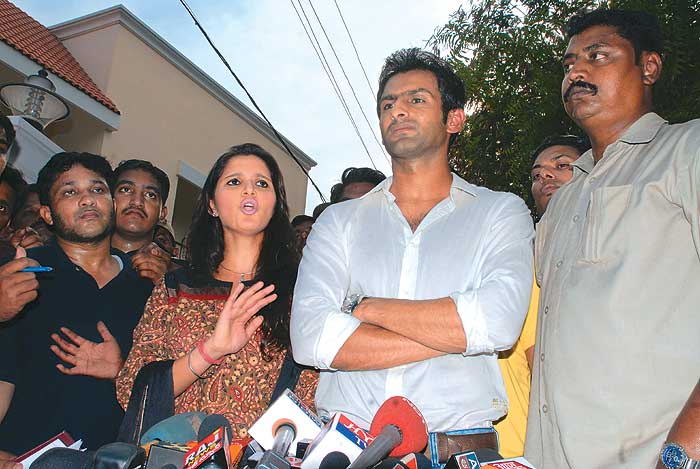 As the star reporter of Hyderabad’s leading Urdu paper Siasat begins recounting the developments on Day Six of our most closely-watched love triangle drama in recent times, his ageing editor, Zahid Ali Khan, is looking anything but pleased. One would think it’s the stuff of every newspaper editor’s dream: young, attractive tennis star Sania Mirza—the scion of Hyderabad’s shrinking aristocracy and the darling of its modernising Muslim youth—announces her engagement to Pakistani cricketer Shoaib Malik months after breaking off her engagement to local boy Sohrab Mirza. A day later, a mysterious girl with two names—Ayesha and Maha Siddiqui—surfaces with an old story of a messy marriage with Shoaib. Threats of legal action fly and the Pakistani cricketer scurries ahead of his baraat to his fiancee’s home in an attempt to clear his name. Instead, he gets embroiled in police charges of cheating, cruelty and harassment, with the “wronged woman” threatening to produce his semen-stained clothes in court and the man claiming to be his father-in-law, Ahmed Siddiqui, urging that Malik be stoned to death for having illegal sex with his daughter. 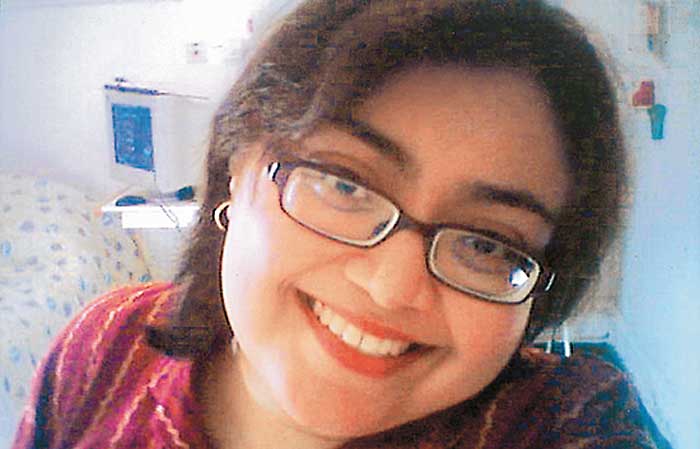 But there is growing distaste on Khan’s face as he hears his reporter out. “These two girls are making a mockery of the entire community...saare Mussalman ko nanga kar diya (they have shamed all the Muslims).” 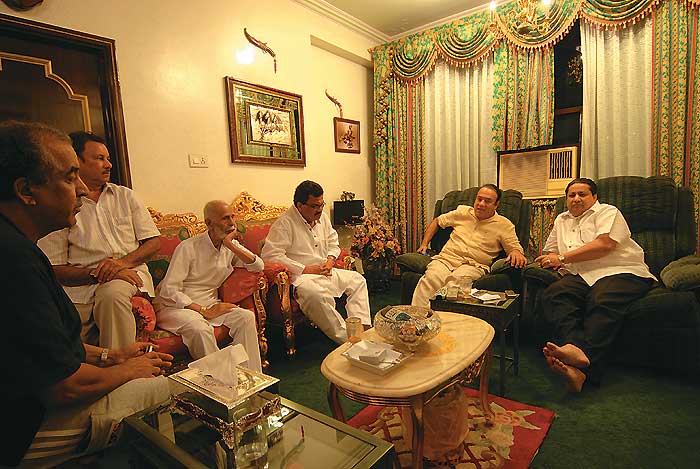 Community elders, right, get together at Ikram Kaleem’s apartment to discuss the Sania-Shoaib snafu

There is the same consternation reflected on the faces of half-a-dozen Muslim “elders” gathered in the plush drawing room of businessman Ikram Kaleem’s luxury apartment on Tuesday evening. For two days now, they have been trying to work out a “compromise” between the Siddiquis and Malik, but with no success. “The Mirza family has been stonewalling us,” confesses Kaleem, who like his assembled friends, has little influence with the Mirzas, an old and respected family whose forebears served under the Nizam as high officials. All of them, however, are well acquainted with Maha Siddiqui from her childhood days spent in a gated community in Saudi Arabia where her father worked for the same airline company as they did. But that is not why they are so anxious to resolve the embarrassing melodrama. It’s because the Siddiquis seemed willing—even intent—on dragging not only their own daughter, but the entire community, through the muck. All of them concur that the Siddiquis were “different” from the other families in the airline colony. The Siddiquis’ two daughters were allowed to run “wild”, and according to them, were “spoilt brats” who flirted with strangers, Maha even changing her voice to make anonymous calls and playing cards with a gang of Pakistani boys living in the same colony. The elder daughter, Naghma, apparently went through two divorces and is now married for the third time. Maha, on the other hand, was “bold” but couldn’t catch a man because of her obesity.

So now they have roped in a minister, Mohammed Ahmadullah, who is willing to play mediator. “I have been getting calls from all over India asking me what’s going on and why we are letting a private dispute besmirch an entire community,” he explains. Soon, the Siddiquis’ close friend and confidant, Dr Shams Babur, is summoned, and in closed-door negotiations—eight sessions with the Siddiquis and 12 sessions with Shoaib and the Mirzas, by means of cajoling, threats and intimidation that go on all night—they eventually get both sides to finally see reason. Shoaib agrees to sign the divorce papers that the Siddiquis have been urging him from the start to sign, and Ayesha withdraws her police complaint. 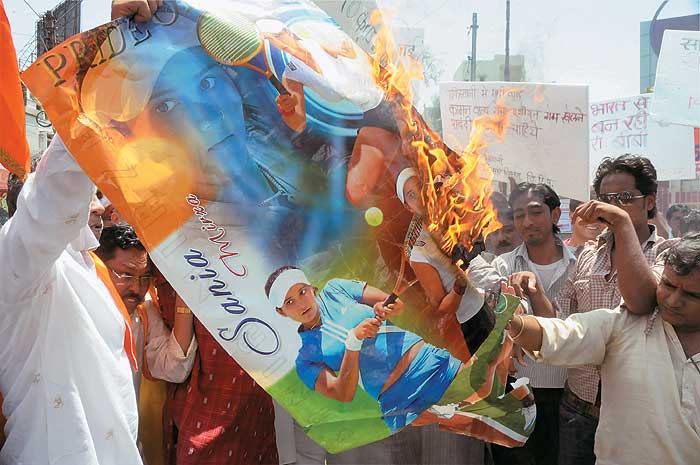 So who won? No one knows as yet but there’s no doubt about who lost. “The major casualty has been the Muslim community,” one of the leading Urdu dailies said in its editorial. Unlike the English media that went to town about Shoaib “the liar”, the Urdu press has blamed both the Mirzas and the Siddiquis for dragging their private affairs into the media glare. “When they knew that the Siddiquis may pose a problem to Sania and Shoaib’s marriage, why couldn’t they have conducted the wedding quietly somewhere else, in Dubai or Delhi?” wonders Siasat’s news editor and the proprietor’s son, Amer Ali Khan. Compromise or no compromise, the controversy has caused lasting damage to Muslims, says Amer. “Both the Siddiquis and Mirzas played with religion, raking up things like phone nikaah which are not there in Islam.”

Advertising professional Arif Khan agrees, “Not many Muslim girls would have handled their lives like Sania did, but what people forget is that she’s more celebrity than Muslim. If you call yourself a Muslim, you have certain obligations: you can’t get engaged and break it off just because you don’t like the lifestyle being Muslim involves, you can’t bring in the personal law only when it suits you, and you certainly can’t live with your fiance under the same roof.” 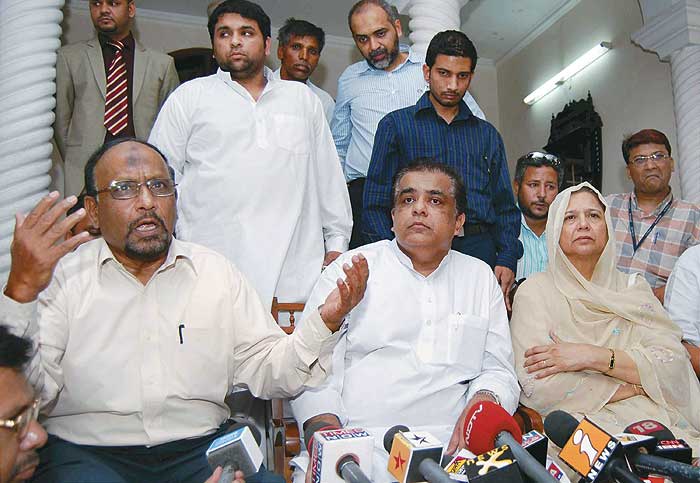 The Siddiqui camp at a press conference, Ayesha’s mother Farisa Siddiqui at right

Even the more laid-back, upper-middle-class Muslims like Ismat Lateef Mehdi, a college lecturer, admit to being embarrassed by the whole controversy. But for Mehdi it’s not just to do with Islam, but with the ‘mismatch’ that an icon like Sania is proposing for herself with someone who is “simply not on par with her”. First, there is the Pakistani angle: according to Mehdi, young Hyderabadis today are uncomfortable marrying Pakistanis. “There are all the practical problems of phones being tapped, not getting visas, and the huge difference in culture. We fear we won’t be able to adjust.” Worse, there is the class issue: “Shoaib hasn’t even passed his tenth, nor does he have a bright career ahead of him.”

Nor is the messy second marriage business in any way helping Hyderabadis reconcile to the fact that their shining star, “who could have married anyone in India she chose to”, is saddling herself with a has-been like Shoaib. “It’s a letdown,” admits Mehdi.

Worse is the class issue. “Shoaib hasn’t even passed 10th, nor does he have a bright career ahead of him.”

Then there are those like Hasanuddin Ahmed, former chairman of the Minorities Commission, who see in last week’s melodrama the breakdown of Hyderabadi culture. When Sania broke her engagement with Sohrab Mirza, Ahmed points out, both displayed Hyderabadi culture at its best: refusing to wash their dirty linen in public, and parting with great civility, as is expected of the old families they come from. Ayesha’s extraordinary behaviour, on the other hand, invites the old man’s finest disapprobation. “She kept quiet for eight years, then suddenly woke up when his marriage was announced, raked up dirty things in the media—it’s a get-rich mentality that is against Hyderabad’s old culture.”

One reason why the old culture has been in near-terminal decline is because most elite Muslims were persecuted and fled the city in the wake of the police action in 1948, explains Ahmed. The divide between old money and new is creating a social tension in the community that wasn’t there before. As Amer Khan says, “Many Muslims have minted money thanks to the real estate boom. It’s creating a dangerous trend where people believe they can get away with anything if they have money.” 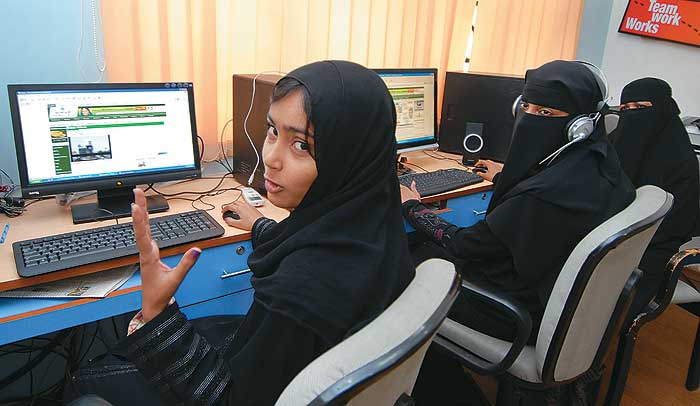 Net control Muslim girls working in an IT office in Hyderabad

It’s a sentiment that Anees Khan, the founder-principal of Nasser, the premier public school for Muslim girls, shares. There’s a big difference between the students who hail from the old families and the nouveau riche ones, according to her. “The value system among upper-middle-class Muslims is still very strong, while the others seem to be letting their children run wild.”

“It’s a society in transition,” agrees Mehdi. “Some families are realistic enough to be aware of changes and adjust accordingly, while others have become ultra-conservative,  putting their daughters behind purdah—a phenomenon we had never heard of earlier.”

But what was perhaps most saddening for those Muslims who stayed riveted to last week’s melodrama was the loss of yet another Hyderabadi Muslim icon. They have watched helplessly as first Azharuddin and now Sania have plummeted from grace. But it could be a good thing, as Arif Khan points out. “Once you stop relying on icons, you grow up and realise that a good Muslim and a good player are not necessarily the same thing.”

By Sheela Reddy and Madhavi Tata in Hyderabad