The Doctor Is In, But Only Just

The NAC lies defanged; the markets leap for joy at Manmohan’s & Co’s charge of a ‘new’ economy 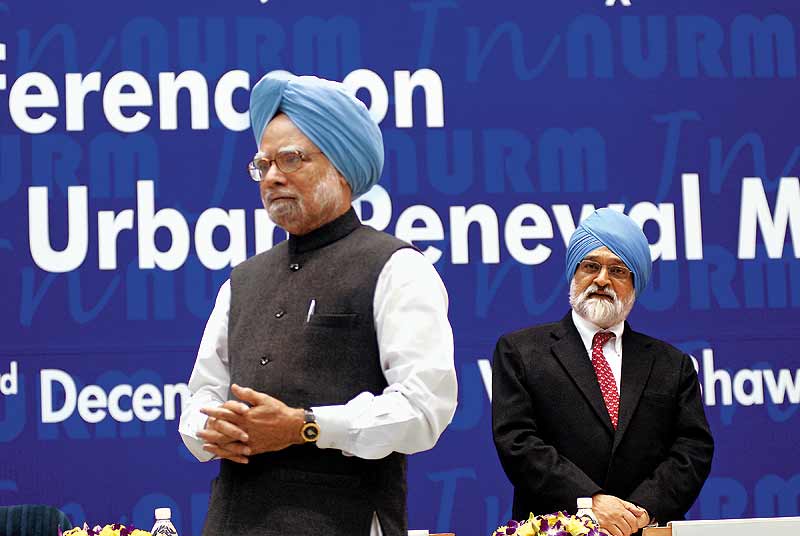 How swiftly things change. Just a month ago, the great Indian growth story was being written off. Now, the “new economy”, run by the PM-cum-FM, will sift through the rubble of under-seven per cent growth, find the hidden springs of recovery and throw in some reforms for good measure. A top taxman says Manmohan Singh has the “credibility for economic reform”, that he’s best placed to manage the often competing demands from states. Yet, within a week of being at the economy’s helm, his shadow over the UPA’s other project—inclusive growth—has been neither benign nor encouraging.

Three of the National Advisory Council’s senior members, agriculture expert M.S. Swaminathan, social activist Harsh Mander and environment expert Madhav Gadgil have been summarily shown the door. Sources in the NAC say things got progressively worse for them. “Over the last six-eight months, NAC members were expected to comply with an increasing number of bureaucratic hurdles,” one NAC source says. “It was increasingly difficult to keep up with requirements.”

One member counted at least five sets of detailed revisions, each involving fresh consultations and rewriting of voluminous reports for every project. The other factor, add NAC sources, is that they were perhaps “too vociferous” in their criticism of the government on issues such as enacting a food security legislation or preventing mining in areas with a delicate ecology.

It’s a situation that has past and present members of the NAC—a body set up to allow India’s deprived masses a say in government—examining afresh the raison d’etre of the Sonia Gandhi-constituted body. “It’s almost as if the NAC was set up only to manage the impact of economic reform on the poor. When reforms slowed, the justification of social justice seems to have disappeared,” a source close to the developments says. Like the recent decision to allow the export of wheat, which has come in for criticism from right-to-food activists.

Gadgil, who has been working as an environment activist since the 1980s, makes light of it, saying there was “no question” of it being a resignation. His position as member was merely not renewed last month, after two previous renewals. “I think it is perfectly reasonable that new, young people should be allowed to participate in the NAC,” he says.

Yet, others say his case raises concerns over the NAC’s changing role: since 2006 the government had been lobbying for 39 locations in the Western Ghats to be recognised as world heritage sites. It set up a committee to examine the region’s ecology and then set up another committee, headed by Gadgil, under the NAC. In his report finalised last August, Gadgil recommended zonal limits to construction, mining and industrial activity in these areas. The Union ministry of environment and forests refused to release the report, until an unfavourable HC verdict forced it do so in May this year. (UNESCO granted the heritage site status a few days back.) Then, Gadgil was dropped—his report remains an orphan of sorts.

Furthermore, at no point did the two committees—the MOEF’s and Gadgil’s —talk. “They were never interested, a mutually agreed meeting could never be fixed. Posturing is one thing. Taking effective steps for the environment is another,” Gadgil says. Then there’s M.S. Swaminathan, who says, “An advisory committee will from time to time take up new issues and involve new people, which I welcome.” He says he couldn’t attend meetings of the working groups when Parliament was in session—though he, too, didn’t know his time at NAC (over two years) was nearing the end.

NAC member N.C. Saxena explains that there are institutional decisions that this or that member may disagree with, but that doesn’t add up to problems in the system. “The government may not implement some of NAC’s recommendations, but a lot the NAC says is also accepted,” he says. There is, however, a concern that there is less patience in top echelons of government for the problems highlighted by the NAC’s exiting members, and that their focus has moved from issues of equity to rekindling higher growth.

“Pranab won’t like to remember his tenure as FM. Managing inflation isn’t easy, for there is a trade-off with growth.”
Yogendra Yadav, Political scientist

It is against this backdrop that the new dispensation—complete with C. Rangarajan and Montek Singh Ahluwalia—has stepped into Pranab Mukherjee’s “consummately political” shoes. The new team promises measured, not knee-jerk, action to bring the economy back on the high-growth track. The change has sparked mini-jubilation in markets.

“If the prime minister holds on to the finance ministry portfolio, the market will certainly like it,” a PMO official says, echoing recent events: The rupee has steadily clawed upwards, and magically even factory output indicators show growth. N.R. Bhanumurthy, an economist with the NIPFP in Delhi, says the underlying reason for confidence comes from the understanding that “at some levels, business activity, including expansion, are under way, though not in mining, power or related sectors”.

Through all this, the PM has done little by way of sweeping reform or announcement: he has simply lent his name to the finance portfolio. Officials say he may do so until later this year, possibly till September. While he does appear to have political support from Sonia Gandhi, it is to be seen if “tough decisions”—like FDI in multi-brand retail—will make it past coalition politics. Perhaps Manmohan can help swing the Goods and Services Tax (GST), an area where Pranab is seen to have failed. He may also be kinder to regulators than his predecessor was.

Some gripe that well-disguised criticism of Pranab’s stint and broad hints that corporates won’t be targeted are ways to make the future appear rosier.

Union law minister Salman Khurshid chimed in on July 4 with the suggestion that parliamentary approval may not be needed to change rules that imposed the retrospective tax. The implication is that since this amendment was more on lines of a clarification of an existing law, it may not require Parliament intervention to undo. The same goes for GAAR, the now-deferred (till 2013) norms for firms to report profits and losses. The PMO swung in, without provocation, to insist that the tougher GAAR norms released by the finance ministry are a mere draft.

So, animal spirits, given free rein, have broken into a slow canter. And there’s talk of a post-October recovery. Cautious talk, for animals love the monsoon too.

Why these three NAC members were summarily shown the door

Questions On The Road To ‘Recovery’

‘I Believe This Is The Truth’