The film crumbles while negotiating the thin line between a woman’s inherent power and her vulnerability. 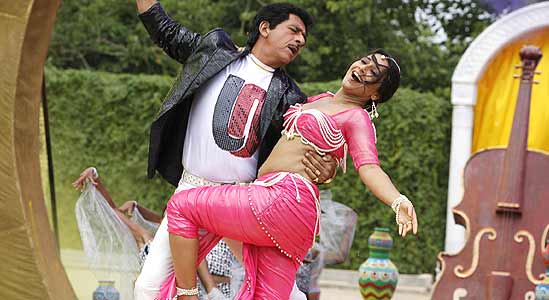 It might be debatable whether The Dirty Picture is based on the life of sex siren Silk Smitha or not, but the film ventures into an interesting, contentious zone. The story of a small-town girl who uses her sexuality to get ahead in a patriarchal, male-dominated world begins with a lot of promise. Not apologetic in the least, Reshma aka Silk (Vidya Balan) is hardly the victim in the game she plays with the several men in her life, including an aging star (Naseeruddin Shah), his pliant brother (Tushar Kapoor) and proud director (Emraan Hashmi). In fact, in a rousing speech at an awards ceremony, the high point of the film, she gives it back to them for their hypocrisy and chauvinism. You can feel the power she has. But things progressively take a maudlin turn in the second half, as she is left with few options. Is there no way out for women like her? Is this what the film ends up reiterating? Bad girls finish last? The film crumbles while negotiating the thin line between a woman’s inherent power and her vulnerability.

Perhaps because the director is too in-your-face in handling the provocative theme. Things get too over the top. Whether it’s the heaving bosom, the peekaboo bra strap, the prominent paunch or lip-bite routine, Vidya Balan is uninhibited and playful but leaves one wondering if in celebrating the liberation of a woman’s sexuality, the film actually also ends up pandering to the voyeur in every viewer. Is that the reason for a ‘woman-centric’ film’s success in a male-dominated industry?

The characters are set in the film industry in the south. The recreation of the time, the place, the kitsch, colour and the people alternates between the real and the caricaturised. Every interaction is built like a big encounter. And the film is structured as a series of such encounters, one leading on to the next. Instead of conversations, it’s dialoguebaazi. It feels terribly odd to find every character speaking in double entendres, every sentence full of wordplay and innuendoes—an obvious hangover from Luthria’s hit Once Upon A Time in Mumbaai. But every film can’t hang on the same formula, however successful. Wish Dirty Picture had a lingo of its own. And a slightly subtler one at that.