The Dharma Of Instant Karma

Never confined to ‘disturbed areas’ alone, excesses are ­becoming increasingly normal in every sphere of policing 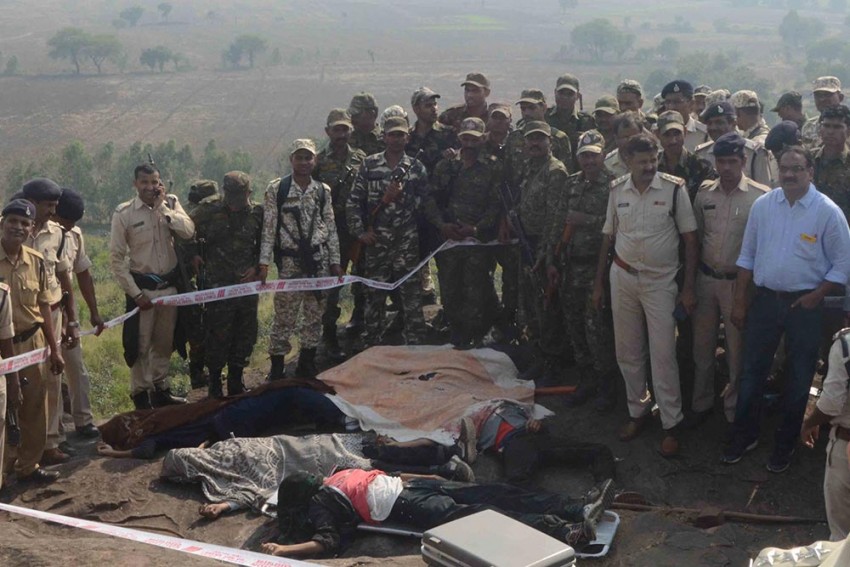 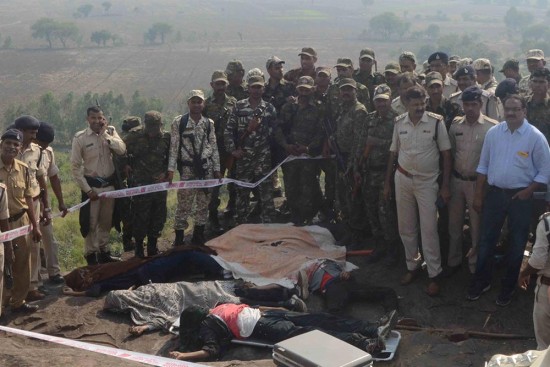 Once every few months, tribal women from Sarkeguda village in Chhattisgarh’s deep interiors walk the 52-km road to Bijapur town and then take a rickety bus ride to Jagdalpur—Bastar’s district headquarters—in pursuit of the law. They are seeking justice for the killing of 17 villagers, including seven children, on the intervening night of June 28-29, 2012, by security forces, who fired upon villagers, allegedly mistaking a gathering (where preparations for an upcoming festival) were being discussed to be a meeting of Maoists. The multiple journeys to Jagdalpur bring the villagers face to face with the security personnel they testified against, and the stares they get from them and other policemen, for obv­ious reasons, are anything but friendly.

The Sarkeguda killings had triggered public debate on fake encounters in conflict-torn regions. And when news of the killing of eight und­er­trial prisoners from Bhopal central jail on October 31 rekindled that debate, the focus was on Muslim identity and outlawed SIMI connections.

‘Fake encounters’ or extra-judicial killings by policemen are a recurring phenomenon that allows questions to be raised on the legal accountability of law-enforcement agencies—although when there’s a context of “national security”, raising those questions becomes difficult and politically charged. It is hard to forget the image of Manipuri women protesting bare-bodied following the extra-judicial killing of Thangjam Manorama, alleged member of the PLA, an outlawed Manipuri insurgent group. The focus that time was AFSPA—the Armed Forces (Special Pow­ers) Act, which is often criticised for having enabled impunity in cases of excesses during counterinsurgency operations.

Also from Manipur was the ‘encounter’ story of Chungkham Sanjit, the 27-year-old Meitei who was killed barely 500 met­­res from the state assembly in Imphal. A local photographer captured the whole sequence of events, leaving little room to doubt that it was a murder in cold blood by personnel of the Manipur Police Com­mandos. The pictures were published by a national newsmagazine, eventually leading to a Sup­reme Court-monitored CBI probe into alleged fake encounters in the state. A chargesheet was filed in 2010, and acc­used no. 3, head constable Herojit Singh admitted this January to have shot the una­rmed Sanchit six times.

October 31 has brought the encounter debate, literally, centrestage—not the Northeast, but pat in the middle of the ‘mainland’. At 8 am that day, news agency ANI had tweeted: “8 SIMI terrorists flee from Bhopal Central Jail after murdering a jail guard.” The undertrials were labelled ‘terrorists’ and ‘justice’, it turned out, was just the squeeze of a trigger away. In the days following the encounter, there were claims and counter-claims on whether the undertrials were armed or not.

“The State is carving out ­exceptions to justify illegal police action,” says Manisha Sethi, who traces the history of fake encounters in India in her book Kafkaland.

Police excesses—illegal detentions, cust­o­dial torture, extraction of forced (often false) confessions—have been routine in investigations as well as mainte­nance of law and order. Tracing the history of fake encounters in Kafkaland, Manisha Sethi observes that the “modus operandi of these killings was established early in the life of our Republic” and “the methods of elimination have hardly changed”.

“Northeast, Kashmir and Punjab were the laboratories where police brutality was developed. These have moved out from the conflict zones to the rest of the country, with the state carving out exceptions to justify illegal police action,” says Sethi. In the Northeast and Kashmir, AFSPA gives unfettered powers to armed forces, but police and paramilitary personnel too use it to carry out illegal killings.

In the early 1970s, youth in Calcutta were routinely rounded up and killed for being ‘Naxals’. During the Khalistan insurgency, several police officers in Punjab won accolades for “dealing with the insurgency with an iron hand”. Many pointed out that the state’s policing system was built on the blood of Punjabi youth. Last year, former Punjab police officer Gurmeet Singh Pinky exposed the truth of the encounters in a conversation with Outlook. 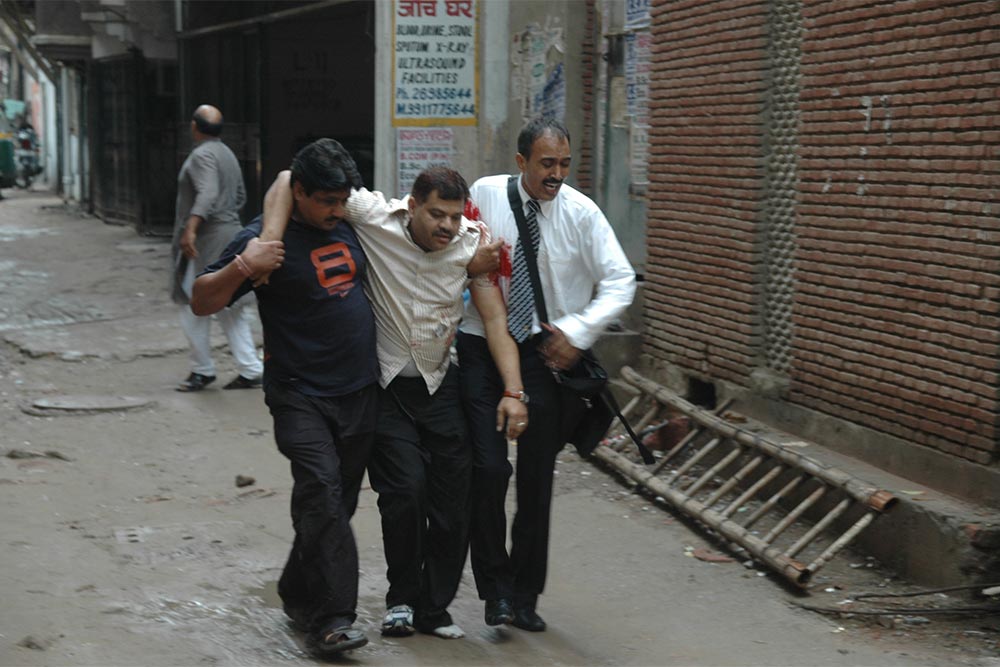 Some of these methods moved to the streets of Mumbai and, in popular culture, the epithet “encounter specialist” stuck to cops such as inspector Daya Nayak, who were portrayed as heroes meting out INS­tant justice to criminals. An “affidavit of conscience” filed by Ketan Tirodkar—an occasional journalist who acted as a fixer for the police and the underworld—cha­nged the narrative about Nayak, who is back in uniform after the Supreme Court threw out the case against him citing a matter of technicality.

With the turn of the century, when the focus of ‘counter-terrorism’ shifted tow­ards Muslims, the ‘Punjab method’ could be discerned in numerous cases involving youth with that identity. Many were lab­elled as ‘operatives’ of the proscribed Stu­dent’s Islamic Movement of India (SIMI) and later the Indian Mujahideen (IM).

On September 19, 2008, the Delhi Police Special Cell shot dead two Muslim youth in Batla House, alleging they were IM operatives. Inspector Mohan Chand Sharma too was killed and that was used to authenticate the encounter.

In 2003, a year after the Godhra riots, there were several wee-hour encounter killings in Gujarat, beginning with that of Sadiq Jamal Mahar on January 13. The police alleged that those killed were terrorists on their way to assassinate the then CM Narendra Modi, former deputy PM L.K. Advani and VHP leader Praveen Togadia.

Following the Bhopal encounter, Kiren Rijiju, MoS in MHA, said that people should give up the “habit of raising doubts and questioning the authorities and the police”,  If it concerns national security, no questions should be asked—that’s the message.

Late advocate Mukul Sinha, though, had asked many questions and challenged the killing of Sadiq and others in the Gujarat High Court. Through a CBI probe and Tirodkar’s affidavit, it appeared that Daya Nayak had arrested Sadiq in Mumbai and, even though the Intelligence Bureau (IB) cleared him, allegedly handed him  over to the Gujarat cops. The then DIG DG Vanzara and Dy SP Tarun Barot were arr­ested but later bailed out as the case dragged on.

In years that followed Sadiq’s killing, other encounters spilled out of Gujarat. Ishrat Jahan, Sohrabuddin Sheikh and Kauser Bi were all described as LeT operatives on their way to assassinate politicians.

Recently, the CBI told a court that it had evidence of “323 SPOs/pol­icemen” and 95 CRPF/CoBRA per­sonnel being involved in the burning down of 160 houses in Tadmetla village in Chhattisgarh’s Sukma district.

“Encounters should be the last resort when you are fired upon or when you land in an ambush,” says former Chhattisgarh DGP Vishwa Ranjan, who also served with the IB for several years. “When I was DGP, Chhattisgarh recorded the highest number of arrests. I insisted on taking suspects into custody as you can then interrogate them to gather intelligence and evidence. But, when witnesses turn hostile or don’t show up in courts,  it leads to acquittals by default, provoking policemen to adopt short-cuts.”

Imran Ali, a Bhopal-based advocate, has a different view about terror cases that he has followed closely. “Most cases in which young men were accused of being SIMI ope­ratives and terrorists have fallen apart,” he says. “They were acquitted because of lack of evidence, leading to frustration among the investigators.”

The poor and marginalised are not the only victims of police excesses. Singapore-based biscuit baron Rajan Pillai fled to India when a Singapore court found him guilty of corporate fraud in 1995. Indian authorities arrested him from a New Delhi hotel in the middle of the night and whisked him away to Tihar jail, where he died four days later.

The prison authorities first said he died from liver cirrhosis, but the autopsy revealed that Pillai had died of asphyxiation. The Leila Seth commission failed to probe the conspiracy, but the case did change the standards of healthcare in Tihar jail.

The multitude of violations notwithstanding, there are safeguards in the law against police excesses and the new Model Police Bill has proposals for greater police accountability. And yet, when clashing ideologies determine what is ‘anti-national’,  what’s extra-constitutional becomes a question that often goes unheeded.