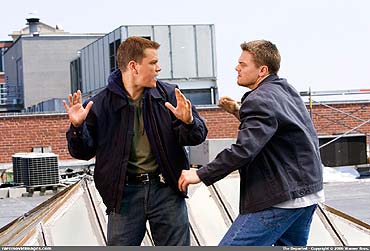 From the very first big line ("I don’t want to be a product of my environment, I want the environment to be a product of me") The Departed holds you in its grip, offering Hollywood drama at its best. Scorsese takes the Hong Kong hit Infernal Affairs and relocates it brilliantly in stormy, crime-ridden Boston where the lines between the good and the bad, the cop and the criminal are all tantalisingly blurred. Of course, there’s enough of gore and violence; blood and profanities but it’s also extremely funny (all those bits on cranberry juice as a diuretic) and has some wonderful dialoguebaazi: "No one gives it to you, you have to take it"; "Man makes his own way..."; "Do you want to be a cop or appear to be a cop?" The biggest draw, of course, are the star acts: Caprio, Damon and Mark Wahlberg in particular are electric.

I have a complaint though. However efficient Nicholson might be, I think he is overdoing the manic act, in every other film he plays the devil with those arched brows. Time for a change of track I guess. And the very best bit: that cameo of an Indian store owner who doesn’t just spill out a lecture on race relations but uses the popular Hindi cussword. Wasn’t that a first in Hollywood?