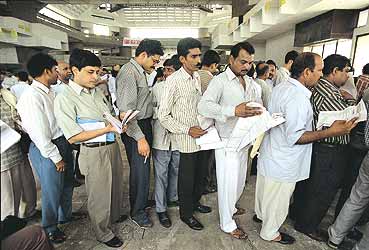 outlookindia.com
-0001-11-30T00:00:00+0553
Lines Of Actual Control
There’s much that we might hate about Delhi, but what’s our pet peeve? Queues. A recent poll conducted by Prahar (Public Response Against Helplessness and Action for Redressal) among Delhiites revealed that "messy" and "endless queues" are a major irritant affecting everyday life. "People find themselves helpless while combating the pressures of a fast-paced urban life where time is a scarce resource," says A. Raj of Prahar. Some 65 per cent respondents voted for it as their biggest problem. They felt there’s chaos everywhere—from buying railway tickets to paying taxes, from boarding a dtc bus to getting into a government hospital. A telephone might be available on demand but paying the monthly bill is an ordeal. In fact, 91 per cent respondents considered mtnl bill payment counters as the biggest centres of long queues. About 81 per cent and 56 per cent voted for electricity and water bill payment counters and 41 per cent considered railway ticket counters as major culprits. However, private sector service providers were seen as far more responsive to customer care. A 44 per cent of the respondents said they stood to lose three-to-five hours in a month in queues and 58 per cent said they could spend the time they wasted in queues more qualitatively with family and friends.

Prahar is now planning to initiate an anti-queue campaign by approaching the service providers directly to find means to curtail long lines. "If any service counter has more than 10 people queuing up at a time, it’s not doing its job properly," says Raj. Delhiites have a solution to queues too. They say things will improve if there are more collection counters in the city with a mechanised system and a more courteous staff. Queues apart, 63 per cent respondents felt that scarce housing space worried them the most, while 60 per cent said that deforestation and diminishing public parks are a major issue. While 53 per cent complained about safety and security, 45 per cent cavilled against pilferage and adulteration and 18 per cent agreed on pollution as a major urban problem.