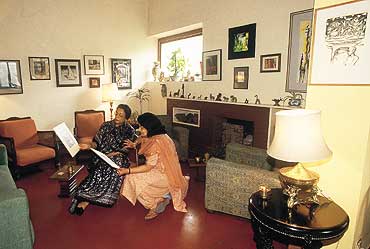 outlookindia.com
-0001-11-30T00:00:00+0553
Guests On The Wall
Their calling card reads: art aficionados and gallery-hoppers. But when it came to doing their bit for exhibiting works of art, Asha Narang and Asha Kishore decided to create a new space altogether, one that would be far removed from a "typical gallery". Result: an art salon of the "19th century French variety" in Delhi’s Nizamuddin neighbourhood. The novel concept is all about creating an intimate and personalised environ in which to view and appreciate art. So once in every six-seven weeks, Narang throws open the doors of her living room, and allows the walls of the room to get adorned by an assortment of paintings. Special invites are sent across for the opening. Those not on the exclusive guest list are also welcome to see and buy these "living room exhibits" by prior appointment. "We don’t want anyone to get tied down by the timings," explains Narang. The idea is also to give lesser-known artists a chance to reach out and to make art affordable to as many people as possible. "We are not in the business of exhibiting the Husains and the Gujrals," says Narang. In the future the duo wants to organise special events around the exhibitions. "We want the whole effort to become a forum for artists to get together and have an interface on arts," they say. No wonder art and film appreciation workshops figure next on their list of things to do.
Namrata Joshi

No, it doesn’t star the soccer pin-up boy David Beckham. But yes, Bend it Like Beckham is inspired by Beckham’s free kick that "defies gravity". "It’s the metaphor for the film which is all about bending rules, not breaking them," says British filmmaker Gurinder Chadha who was in the capital recently with her teaser of a third film. "It’s about following what you want, about juggling your dreams while keeping everyone else happy," she says. The film focuses on Jess, an Indian girl who wants to play football instead of making perfect chapatis. She shares her dreams with the English girl Jules whose mum wishes she could be more girlish. Chadha calls it a fairytale which combines British obsession for football with the Indian fascination with weddings. And if Beckham is there, can Victoria Posh Spice be far behind? Bend It... also looks at the redefinition of femininity and feminism in the post Girl Power era when "the girls are becoming far more assertive". The biggest kick for Chadha is that Bend It... has managed to elicit a far wider appeal than her first film, Bhaji on the Beach. While Bhaji was released with a mere five prints, Bend It... hits the circuit with 500 prints and gets screened in India in June. "We have moved into the mainstream. My film is not being pitched as British-Asian but as a British film," she says. So what’s next? A film with the cast drawn from Bollywood, Hollywood and Britain.
Namrata Joshi

Bowing To The Bowring Skill

The first auction of Bowrings in Mumbai set new records in the sale of contemporary Indian art. Amidst frantic bidding, with NRIs and foreign buyers bidding on phone, V. S. Gaitonde’s work fetched a record high of Rs 23 lakh which matched the world record for a work by the same artist. Nicholas Roerich’s tempera work of Kanchenjanga—Himalayan series went for a record Rs 20,12,500.Two of M.F. Husain’s nursery furniture pictures from the 1940s, which were estimated to fetch Rs 40,000-60,000, were finally sold at Rs 1,26,500 and Rs 2,18,500. Patrick Bowring, deputy chairman, Bowrings Fine Art Auctioneers, found the buyers very discerning. "They concentrated on pictures of rarity and quality," he said. The event was also the first-ever auction in India of carpets, rugs and shawls and of marbles, ceramics, bronzes and clocks from the famous Tanksalwalla Collection.

Vadya Darshan—Sangeet Natak Akademi’s fortnight-long exhibition of India’s classical instruments—is like walking into the past. Showcasing about 300 rare musical instruments, it was inaugurated by Pandit Ravi Shankar. Amongst the exhibits are about 10 different types of veenas from different states and an array of percussion and experimental instruments modified by ancient maestros. Of particular interest are rare and odd instruments like the Villu from Andhra, a 7.5 ft bow with bells; Karva, a 6-ft brass horn from Rajashtan; Tappu, a horn made of gourd retaining the vegetable’s natural texture, colour and shape; and the Makara Veena which resembles the crocodile in size and shape. The show’s highlight is a display of the collection of the late Sarod maestro Pt Radhika Mohan Moitra. It includes the original Mohan Veena from 1948, apart from other rare ones like an 1860 Sarod of Ustad Mohd Amir Khan, Ustad Basit Khan’s Dhrupadi Rabab and the rare Afghani Rabab of Ustad Niamatullah Khan.

After receiving acclaim in London, Amsterdam, Singapore and Tokyo, Nalini Malani’s unique video art was unspooled in Delhi last week. Hamlet Machine, a video installation inspired by Heiner Mueller’s adaptation of Hamlet, reinterprets the classic in the context of the rise of Hindu fundamentalism in the wake of the Babri Masjid demolition. Expropriate, a video/ shadow play installation, is about the onslaught of WTO and GATT, the absurdity of liberalisation when "cheap air time on the cell phone is compared to vada pau, a working class man’s lunch, costing Rs 3 only". Animation video Memory: Record/Erase is based on The Job by Bertolt Brecht about an impoverished woman who during the Depression has to impersonate her dead husband to get his job.In attendance: Vivan Sundaram, Geeta Kapur, Rajiv Sethi, Suneeta Kohli, Arpita and Paramjit Singh and Vasundhara Tiwari.

Milind Soman who, it now transpires, rejected Fardeen Khan’s role in Pyar Tune Kya Kiya and Arjun Rampal’s wounded look in Aankhen because the scripts didn’t interest him, will soon be seen in some interesting aberrations. One of them is Agni Varsha, which is a story from The Mahabharata but sans arrows from rival camps that collide in sweet sparkles and fall down. Instead it’s an intense picturisation of Girish Karnad’s play The Fire and the Rain. While Milind is a "central character", a Brahmin "boy" with whom the film begins and ends, the film teems with Aby Baby as Lord Indra, Raveena Tandon as the priest’s (Jackie Shroff) wife who is later successfully seduced for some good reasons by a bright lad played by Nagarjuna. Sonali Kulkarni plays a tribal lass and the Tamil reptilian Prabhu Deva plays, predictably, an asura. Directed by Arjun Sajnani, the film is complete and is expected to be released in June but, as a trade pundit says, "it has not been bought by distributors yet". Wish it luck.
Manu Joseph

A Bit Of Julia

The tagline is quite irresistible: own a piece of your favourite star. Cafedreams.com partnered with One Clothing (owned by former Miss India Ruchi Malhotra) and PVR Cinemas to put up for sale 60 original signed and framed pictures of Hollywood stars at PVR Priya and PVR Anupam in Delhi last fortnight. The collection included shots of eternal favourites Julia Roberts, Al Pacino, Jodie Foster, Tom Cruise, Brad Pitt and Madonna among others. Also on display were outfits inspired by films—replicas of Nicole Kidman’s dress in Moulin Rouge, Keanu Reeves’ shirt in The Matrix and Richard Gere’s in Breathless.