A yorker is launched from a Murdoch newspaper. It swings crazily and strikes two unlikely targets: Vasundhararaje and Sushma Swaraj. 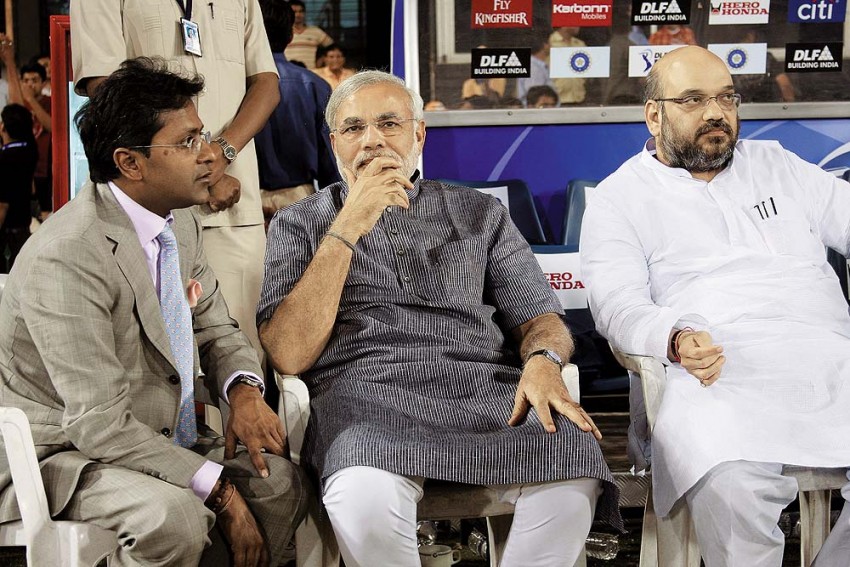 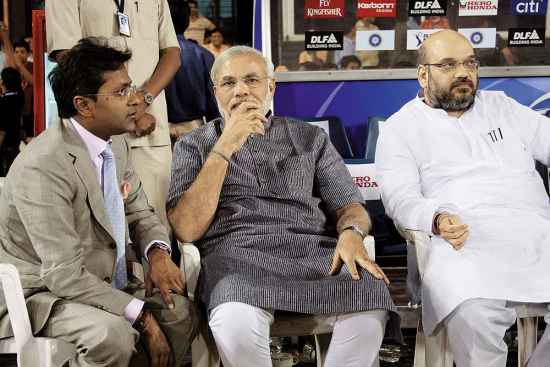 The inswinging yorker, of the kind Waqar Younis hurled, is one of cricket’s most aah-inspiring sights. As it leaves a bowler’s hand, it seems the ball will harmlessly reach first or second slip. But as it traverses the 18 yards in the air to reach the other end of the pitch, something happens: it curves in menacingly towards the batsman, leaving him scampering around trying to prevent the ball from thudding into his pads or knocking down the stumps. Good batsmen know how to defend it or work it away; bad ones end up flummoxing even the wicket-keeper.

On June 7, the Sunday Times, a Rupert Murdoch newspaper, bowled something just like one of Waqar’s yorkers. An article authored by three reporters, including its Delhi correspondent, appeared to be aimed at Keith Vaz, a British MP of Indian origin—but the next thing you knew, the ball was hitting external aff­airs minister Sushma Swaraj. And while the appeal was being heard, it was rushing away and striking two spectators outside the boundary ropes: Rajasthan chief minister Vasund­hararaje and her son Dushyant, a BJP MP. 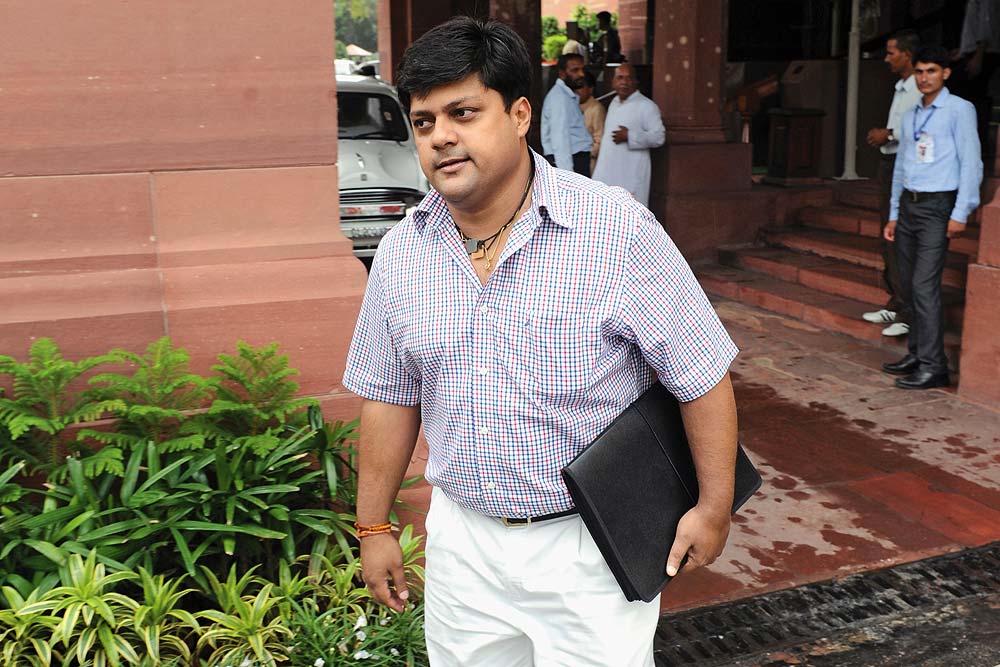 Since India does not believe in DRS, the sponsors, managers and teammates are hollering ‘not out’ from outside the playing arena. But as Sushma’s partner at the non-striker end, Lalit Kumar Modi, 49, makes some confusing signs to the cameras covering the action, there is little doubt that the 13-month-old Narendra Modi government is facing the biggest battering of its image. A prime minister who sanctimoniously proclaimed in Shanghai that Indians were ashamed of being born in this country bef­ore his government came to power in May 2014 is being asked, in a very Indian way, some familiar questions on impropriety, illegality, conflict of interest, wheeling-dealing—or, in aam aadmi language, plain, straightforward, unalloyed corruption.

And on the nightly TV gabfests and in the morning papers, and all day on social media, the conspiracy theories are being regurgitated:

It is still unclear how Sushma, who has been doubly careful about who she is seen with (having burned her hands once, being photgraphed with the Reddy brothers of Bellary), got singed so badly in the Lalit Modi affair. There is no doubt that, as early as her stint as information & broadcasting minister in the Vajpayee government, ESPN, a channel launched in India by Lalit Modi’s family, was one of the “favoured few”. As ‘LaMo’ himself has admitted, he has known Sushma’s husband Swaraj Kaushal for over two decades, and their daughter Bansuri has been on his legal team. Still, what explains the outbreak of the e-mails implicating Sushma in a foreign newspaper?

One theory is that the attempt to trip up Sushma Swaraj has the backing of someone inside the Modi cabinet.

“This controversy was to target Sushmaji, not Lalit Modi,” say two Delhi-based RSS leaders. One version has it that either the BCCI as an institution or some of its bosses were worried what Lalit Modi might have on them. So they commissioned an Israeli agency to hack into Lalit Modi’s e-mail. This, goes the theory, had the backing of a senior cabinet minister, who also happens to be a prominent cricket functionary. Some of the hacked e-mails were passed on to the Sunday Times, thereby creating a smokescreen over who leaked them. Sources in the BJP say Sushma is convinced the betrayal came from not just within the party but actually from within the cabinet. A senior leader explains, “The cricket lobby was used to fix Sushmaji. Of course, no one likes a particular minister to do well and shine. Sushmaji was doing extremely well for herself. After all, the prime minister himself praised her work ethic and she got the Bangladesh land bill passed. People got jealous and decided to bring her down.”

It is equally unclear how Vasundha­raraje, who in a se­cret British report two years ago was linked to Lalit Modi in a web of “political connections”, was suddenly hung out to dry by his lawyers and public relations team. While the Sushma Swaraj issue was raging on June 16, TV stations produced an unsigned document showing her vouch for Lalit Modi on the condition that it is not made known to Indian authorities. 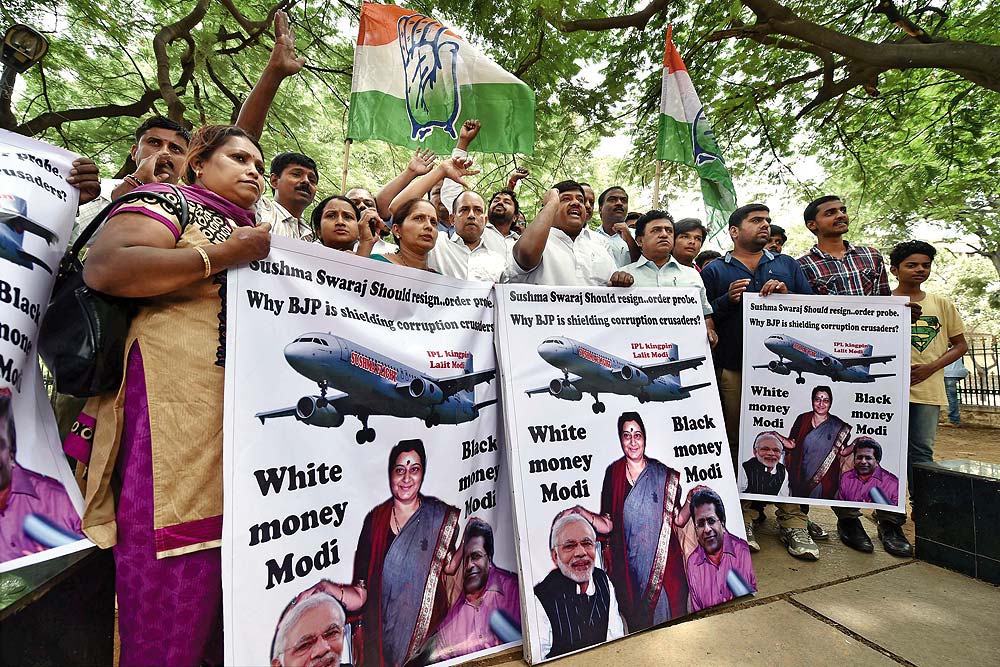 The charitable view here is that Lalit Modi had broken off with his “family friend” just ahead of the November 2013 elections in Rajasthan. His tweets to her, warning her of Arun Jaitley, were topped by one in March, after he lost the Rajasthan Cricket Association elections: “She has fired the first salvo. I too can fire missiles.” Subsequent stories of his investments in her son’s companies have only served to confirm the parting of ways, although Lalit Modi claims Vasundha­raraje accompanied him to Portugal for his wife’s cancer treatment at a hospital designed by Charles Correa.

Now Narendra Modi cannot be seen as sacking one and backing the other. He is likely to let things hang a bit.

Nevertheless, whoever targeted the foreign minister has unwittingly ended up hitting Vasundhararaje, and the two, #DespiteBeingWomen, are in opposite camps of the BJP. Which is why what Narendra Modi does from here on will be interesting. He clearly cannot sack one and back the other. While Sushma’s action has impropriety written all over it, Vasundhararaje’s are a lot more damaging, especially for a party which wears its nationalism on its sleeve. Getting rid of Sushma at this juncture could also send the wrong kind of encouragement to those gunning for her, which Narendra Modi can ill afford. Sources claim that the prime minister is of the view that “Sushma has acquired an image of a performing minister as opp­osed to all others, who have either not managed to perform or have impressed neither the intellectuals or the masses”. 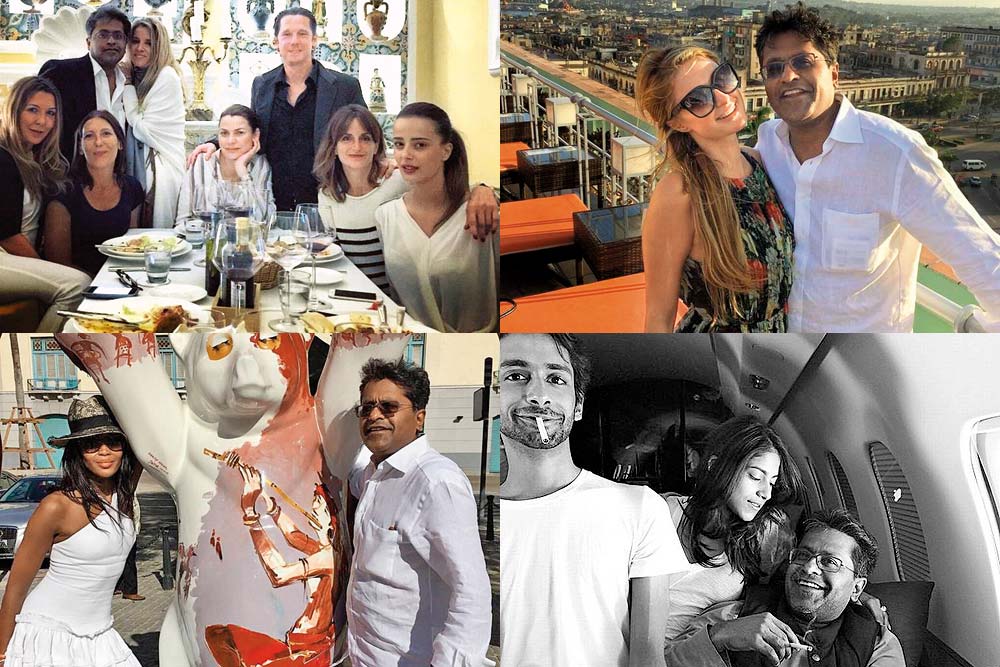 Many colourful lives Lalit Modi with friends in Italy; with Paris Hilton; with supermodel Naomi Campbell; and with his son and daughter on board a flight to Cuba

Much the same has been conveyed by Narendra Modi to the good men from Nagpur. In a meeting at which Rajnath Singh, Dattatreya Hosabale and Krishna Gopal were also present, the prime minister is said to have told the RSS leaders that the best thing to do in the present scenario would be to write off Sushma’s favour to Lalit Modi completely. Those who know the prime minister aver that he “never takes any action under pressure”. If he really has to let Sushma go, they say, he will wait till the Bihar elections, after which a cabinet reshuffle is due. In reality, there is no love lost between Narendra Modi and Sushma, who had been less than warm to his projection as the prime ministerial candidate of the BJP. But he also cannot miss the fact that, backing her now, he will be seen as magnanimous.

No such support, however, is forthcoming from the prime minister for Vasundhararaje. Party members have even been told to steer clear from commenting on her case till clearance from the party bosses. Senior leaders attribute this indifference towards Vasundhararaje to Narendra Modi’s personal dislike for the Rajasthan chief minister. 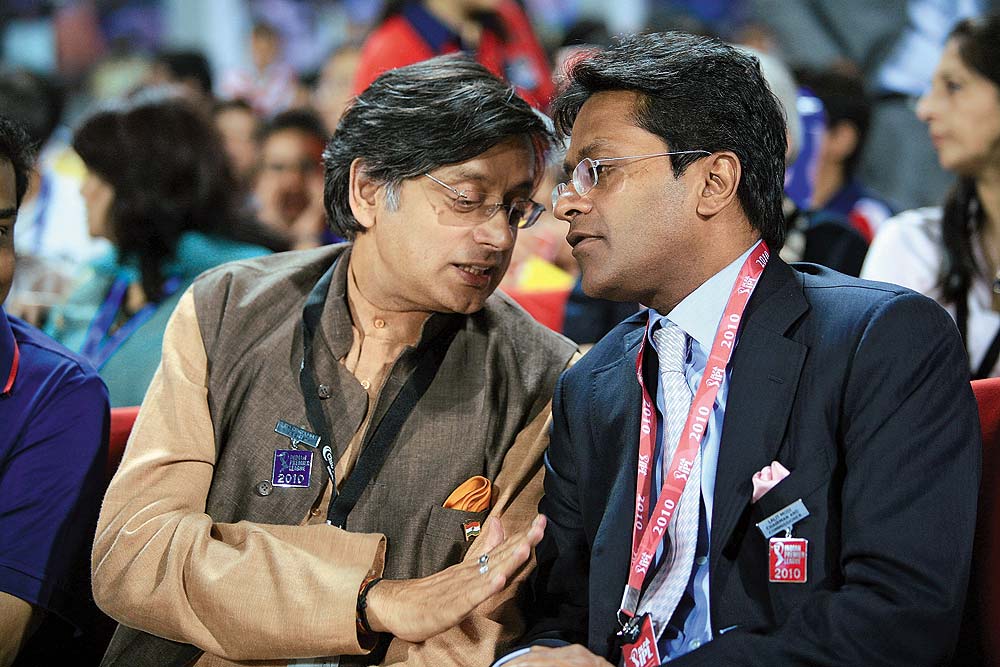 Sources claim that BJP bosses in Delhi who have been trying to get rid of Vasundhararaje for a long time now would only be too happy to use her current discomfiture to demand her head. Her annoyance with the prime minister for not including her son Dushyant into the Union ministry has rankled; her inability to get along with a “junior” like Amit Shah; the RSS distrust of her; and her alleged “non-cooperation” in the  byelections, which enabled Congress to walk off with a few seats, could all go against her if the steam builds up.

That said, after barely a year in office, there are surely deep cracks in the Narendra Modi government—this is what the Lalit Modi affair has highlighted, and it runs against the prime minister’s advertised reputation as a “control freak”. 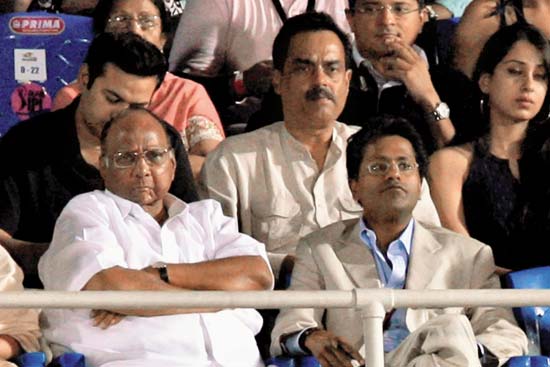 Shatrughan Sinha’s open endorsement of Kirti Azad’s snarky tweet on an “AsteenKaSaanp”, or a snake one has cared for, being behind the tripping up of Sushma, Jaitley’s silence on the issue for the first few days and then a reluctant defence that actually puts the external affairs minister on the backfoot, the squabble between the MEA and the Enforcement Directorate, which comes under Jaitley—these instances have shown up the simmering suspicion.

With the prime minister, BJP president Amit Shah and Jaitley themselves involved deeply in the politics of cricket, not to mention other worthies like Sharad Pawar (NCP), Rajeev Shukla (Congress), Laloo Prasad Yadav (RJD) and Farooq Abdullah (NC), they would ideally like to bury the controversy. The longer it swirls, the more the likelihood of more skeletons tumbling out of the cupboard. The Congress, as deeply entrenched in the game as the BJP, seemed to offer a lifeline to the prime minister by suggesting a special investigation team (SIT) to probe into the allegations. But while an SIT would buy a breather, there can be no guarantee it will put an end to more leaks or prevent more collateral damage.

Whatever happens in the future, the Sushma-Lalit Modi saga has ensured one thing: history will not judge Narendra Modi’s government as scandal-free and blemishless. That lost dream will be the prime minister’s personal loss. Forever. At the same time, regardless of his own situation currently, Lalit Modi has shown that the Indian Premier League, for all its money, for all its glitz and glamour, is exactly what people suspected it to be: an incestuous cesspool that thrives on crony capitalism and conflict of interest. As its creator, that will be the former IPL commissioner’s calling card. Forever.

Who Has Given Up Arms?