The Cup, The Spill

The Azzurri prevailed, but it was Zizou who bloodied the sunset 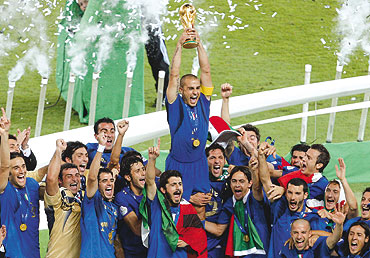 outlookindia.com
-0001-11-30T00:00:00+0553
It's amazing, isn't it? The World Cup Finals last a whole month, involve 32 competing nations, hundreds of thousands of fans and the final itself was estimated to have been watched by 1 billion television viewers. And at the end of it, everyone's left asking the same question. Just what did Marco Materazzi say to Zinedine Zidane to provoke such a ferocious and costly reaction?

FIFA itself has just launched an inquiry into the incident, which probably means we'll have to wait two or three weeks for an official version of events that is unlikely to come any closer to the actual truth than all the feverish speculation of the last few days. The reason is simple. Only two men on the planet actually know what was said and done and the chances of them agreeing to a unanimous verdict are extremely remote—unless Materazzi and Zidane are persuaded to sign up to a watered-down statement in the name of international harmony and FIFA's reputation for fair play.

Zidane, for example, could be less enigmatic on the subject and tell the world how he has never been so spitefully insulted in all his life. Whatever formula he comes up with, Materazzi will simply deny it and claim he never said that. No one can prove anything one way or the other. Materazzi has confessed to insulting the French captain, though not in the extreme way many are suggesting, with reference either to Zidane's mother or Algerian terrorists. The Italian defender has just joked that he is "not a cultured person", and would not even know the correct names of any Algerian terrorist organisations. Knowing footballers, this is probably true, although the insult could have been delivered in non-specific though still overtly racist terms. It is believable too that Materazzi would not casually insult someone else's mother—fond as Italians are of that particular form of wind-up—because his own mother died when he was a teenager and he still reveres her memory.

But the bottomline is no spoken insult, no matter how strong or how inflammatory, could possibly justify Zidane's reaction. Footballers insult each other all the time, it is a part of the game Zidane has grown up with and he has probably dished out a few choice words of his own in the course of his distinguished career. Professional sportsmen try to get an edge any way they can, and while comments on the football pitch may be necessarily shorter, pithier and less witty than their cricketing equivalents, anyone who imagines players greet each other civilly and respectfully in the heat of battle isn't living in the real world.

Sledging's an art form in cricket and here is my favourite example. English quick bowler to rather portly Australian batsman: "You're too fat to take a single, how come you've put on so much weight?" Portly Aussie batsman: "Because every time I make love to your wife she gives me a biscuit, mate." The point is that no one came to blows over the incident, it probably just received a good laugh all round.

What footballers say to each other in the considerably reduced opportunities they have for conversation is likely to be less mannered and more vicious. Yet, everyone knows what goes on, and for Zidane to react in the way he did, in a World Cup final, as captain of his team, in his last ever professional game, was simply inexcusable. Even if Materazzi managed to insult Zidane's mother, religion, race and personal hygiene all in the same sentence, the French captain should have been able to rise above it.

Italian defenders are all practised in the dark arts and Zidane played in Italy long enough to get to know all their tricks. His reaction must have been just what Materazzi was looking for, except that even an Italian could not have been expecting a few provocative words to reduce France to 10 men and deprive them of their captain and expert penalty taker. Those who accuse Italy of cheating, or winning without honour, are being naive. It was Zidane who was naive in falling for such an old trick. 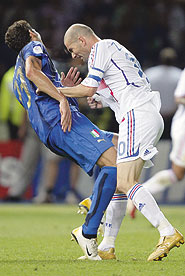 The only reason FIFA is investigating the matter is because of its own embarrassment at handing Zidane the Golden Ball as player of the tournament. The decision was made shortly before the sending-off and announced shortly afterwards to general disbelief. FIFA says there was no time to go back on its poll and choose someone else, so it pressed ahead with a spectacularly inappropriate choice and now it is attempting to retrieve some of its credibility. A much more credible and safe choice as player of the tournament would have been Fabio Cannavaro in any case.

Yet whether FIFA realises it or not, controversy is what football thrives on. Take the Zidane furore out of the final and what do you have? A fairly dull game marching inexorably towards another penalty shootout. Germany 2006 was a pretty good World Cup, though its final games were nothing special. Only the Italians' thrilling win over Germany in the first semi-final deserves to be remembered for footballing reasons, the second semi and the final itself were unexceptional games.

There will be a few more days of Zidane headlines, then summer holidays will be punctuated by pre-season training and the first friendly games of another season, and the World Cup carnival will be over. It resumes again in four years' time, in South Africa. Or, maybe not. The latest information leaking from FIFA is that it is unimpressed by that country's assurances that stadiums will be ready on time, security issues can be addressed, and that the transport infrastructure exists to move large numbers of fans around from venue to venue. It seems possible, let's not put it any stronger than that, that the next World Cup might not be in Africa at all, not even in the southern hemisphere.

Who'd step in? America, Germany and England are all ready and waiting; France, Spain and Italy would be interested too. All those countries have stadiums, transport systems and no security problems. When will a decision be made? Who knows? Sometime after the Zidane inquiry but before the European Championships in 2008. There's no great hurry, plenty of time to debate the issue. There's usually a debate going on somewhere in football. You have to have something to talk about in summer other than cricket.