The Crab Knows The Way

Boundaries and political affiliations crumble at the cancer ward 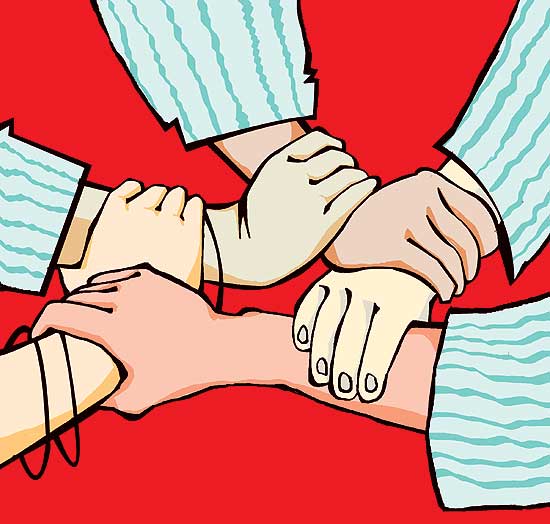 Here we all are, uniformly bald, with even our eyebrows singed off by chemotherapy. The Babylonian drone of Pashto, Arabic, Urdu, Farsi, Hausa and Kashmiri around me at New Delhi’s Apollo Cancer Clinic contains neither a reciprocal vocabulary, nor a mutual grammar. But the commonality of a deadly illness swells the urge to communicate and blurs formality. Pantomime ensures plenty of conversation.

Amid this, the doctors at the clinic, permanently dressed in green scrubs and Crocs, dash between the operation theatre and clinic. There is empathetic surgical oncologist Sameer Kaul, a Kashmiri Pandit whom all in the tense state—Hindu and Muslim—unanimously hold up as a trophy of ‘Kashmiri’ achievement; and there is his soft-spoken Muslim colleague Feroz Pasha, of the archetypical ‘good bedside manner’.

There is a buzz, the surgeon is in. Dozens of Kashmiris immediately scramble past all other doors in an unruly but concerted beeline for Kaul’s. Animated debate in Kashmiri wafts from the room. Apart from the cancer—and therein lies a clue to Kaul’s excellence at putting his very tense patients at ease—there is much to be discussed: the latest buzz from the Valley, the state of Srinagar’s lakes, the two political ‘family firms’, the puzzling exclusion of Kashmiri Pandits from all dialogue on the future of Kashmir, the shenanigans of the security forces in the Valley. No surprises then that Kashmir’s most famous hardline Muslim separatist is Kaul’s patient. When Syed Ali Shah Geelani was diagnosed with cancer, he insisted on being treated by the Kashmiri Pandit alone: even if in faraway Delhi.

As I await my turn, tall men with wild looks pace the corridor and pluck at magnificent beards, their shalwars flapping around their ankles. Surma-rimmed eyes peer from behind chadors, dishdashas swish and flutter past urgently, grizzly elders in prayer-caps finger beads and mutter nervously. To Indian eyes, these people look no different from those among the milling, roaring crowds at a Hafiz Saeed carnival or a Jaish gala. The ones who carry Kalashnikovs and scream ‘Death to India’.

Surely some of my fellow-patients harbour some form of resentment towards India, I wonder idly. Or have relatives who are openly hostile? For those who could afford to: why not hospitals in Europe or Russia? Why ‘infidel’ India? The India that, as they see it, slurps up borders, hogs rivers and treats its Muslims shamelessly? Yet here they are, in the heart of India’s capital and in the cavernous basement of its largest private hospital, in search of a cure and—a second life.

A woman from Peshawar lifts her veil to reveal a beautiful face marred by a giant, unnatural growth. An ancient man from Jalalabad in a pakol hat wheezes and wipes his one ‘good’ rheumy eye, the other mutilated by a tumour. Jolly Punjaban Sweetie, who, in a complete departure from TV soaps, loves and accompanies her sick mother-in-law to the radiation centre every day, pinches the rosy cheek of five-year-old Khalil, across whose head snakes a giant scar. Brain cancer has paralysed him, but he wills his way past a line of chairs to accept chocolate from an old and toothless Bengali lady who wears a new sari every day, as though the daily date with radiotherapy were no less than one with a temple deity.

As a foreign correspondent in and out of South Asia’s wars and resentments for decades—which I must probably thank for my recent tumour—and only too aware of our complicated image among our ‘Islamic’ neighbours, I am intrigued. “Indians working in Afghanistan to seek greater protection,” reads one headline in the paper I have just unfolded. “Pakistan continues to sponsor terrorism in India,” reads another. “Bomb blast in Pune kills 9, Islamic militants behind the attack”, reads a third.

And yet, 10,000 foreigners with serious illnesses—the majority from Pakistan, Afghanistan and the Arab world—thronged Delhi’s Apollo Hospital in 2009 alone. Nearly 50,000 visited it as out-patients.

After seven months at the hands of Apollo’s round-the-clock specialists who burn their candles at both ends trying to save lives, even as peaceniks light theirs in flickering, futile hope at international borders, I find my own glowing bright with conviction.

Are doctors India’s foreign policy aces? Most certainly so. Could they hold the key to both international relations and crucial negotiations in our own backyard? Absolutely. Disease as a unifier in the corridors of hope and pain? Why not? After all and beneath the chadors, the Bengali saris and the dishdashas, behind the bindis and the beards and on the black-and-white monotony of an X-ray, every tumour looks the same.

(The author is South Asia bureau chief of Der Spiegel.)