The Cowardice Of War

What is a limited war? Limited for whom? If it's war, it cannot be limited. If it's limited, then it cannot be war. 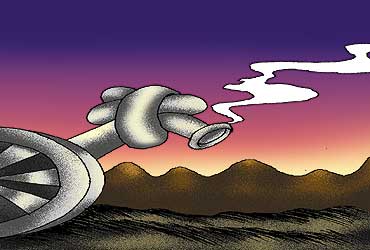 outlookindia.com
-0001-11-30T00:00:00+0553
With a sinking feeling, one watches war clouds darken the Indian subcontinent. Few lamps of hope flicker now, most have been snuffed out in the storm that has been gathering for five months. Drums of war drown out the voice of reason as India and Pakistan slide inexorably to catastrophe. We have reached the precipice. What next?

At moments such as these, even the wise don't have answers. Politicians speak the language of threat and bombast. But if we citizens banish emotions and prejudice from our thoughts, if we calm our mind, if we think through coolly with a clear analytical brain, if we avoid assumptions and presumptions and instead focus on gains and losses, results and consequences, then surely we can only be left with doubts and questions.

Yes, India is angry. India is hurt. India's patience has run out. But what do we do about it? That's the first question that tears apart consensus. In the past, war had been a rallying cry, uniting us all. Now it too, like everything else, is an issue that divides us. Those who oppose war are not weak-kneed pacifists who secretly support Pakistan. Doves protest only because the prospect of war between two nuclear rivals is so frightening that only those who are reckless and completely devoid of imagination can advocate it.

It is astonishing how lightly people talk of war. Is it because they are so pampered by their middle-class security that they cannot envisage the disastrous consequences of war? After all, the previous India-Pakistan wars were confined to remote regions, never resulted in mass-scale deaths and destruction of cities. Is it because they don't know what life was like in war-ravaged Europe, Beirut, Kabul or Jaffna? Is it because they don't understand that today's war could incinerate their middle-class cocoons, devastate their cities, factories and fields, transform their friends and relatives into suppurating corpses, rob their children's future, if not lives?

We're told it will be a 'limited war'. When such oxymorons threaten to become official policy, we're in for big trouble. 'Limited war'. What is that? If it's war, it cannot be limited. If it is limited, it's not war. And limited for whom? They tell us India will limit her punitive strike against Pakistan by attacking jehadi camps in PoK. But will Pakistan's response to this attack be limited? Will Musharraf sit quietly, wring his hands and do nothing? Or will he do something limited like order his planes to drop a few bombs in Jammu? Will India then sit quietly, content with its initial limited strike? Or will it retaliate with greater force? What will a desperate Pakistan do then? Will it nuke a few Indian cities? And then in the grand finale, will India nuke Pakistan off the map? All this doesn't sound very limited.

The tragedy is India and Pakistan don't take each other seriously. If they did, they wouldn't see each other as bluffers. If Pakistan took India's troop deployment on the border after the 13/12 attack seriously, they'd have relented on India's list of 20 wanted terrorists. As to Musharraf's nuclear threat, "Let's call his bluff," is the mantra. What if he's not bluffing just as India isn't bluffing about attacking Pakistan? Our experts scoff: "They won't dare nuke us because then they'd be wiped out." But what if they don't mind dying in a holy war?

And, "they can't nuke us because the Americans are on their soil." Should we ignore that Pakistan achieved its nuclear status through a sustained policy of stealth and smuggling? Can anyone please guarantee our next war will not be nuclear?

Is this game worth playing? Both are so afraid of losing face, they'd rather destroy themselves. What is so hallowed about this list of 20 that makes Musharraf put over a billion lives at risk? With every terrorist attack, we edge closer to war.Having upped the ante and undertaken procedures for waging war, it becomes increasingly politically unsustainable for the NDA government to desist from actually waging war when jehadis heap provocation upon provocation. As much as America is bracing itself for another terrorist attack, so must we in Kashmir and elsewhere in India. What then? Does war become inevitable?

And how sure are we that Musharraf is guiding these jehadi missiles into India? Undoubtedly, Pakistan harboured, trained, armed and funded these jehadis. But are we absolutely certain that Musharraf still exercises complete control over these bigoted madmen? Could it just be possible that he has lost control of them, just as we lost control of Bhindranwale and Prabhakaran, both of whom we trained, armed and funded? If Musharraf had full control of these jehadis, would Daniel Pearl be dead, would Karachi be bombed? Why would he inflict such lethal blows upon himself? Why would he go out of his way to rile the Americans, the French? Musharraf's inability to control the jehadis certainly does not exonerate him. But if jehadis have now acquired a momentum of their own, would punishing Pakistan solve our terrorist problem?

After all, bombing Afghanistan and toppling Taliban has not ended America's war on terrorism. Besides, terrorism is a multi-faced monster. What do we do if young Hindu boys whose parents were burnt alive, or Muslim boys who watched their pregnant mothers being raped, murdered and unborn siblings stabbed, turn to terrorism? Bomb Gujarat?

Do nations court disasters or do disasters court nations? Either way, we have entered a perilous phase. When emotions vanquish reason, rhetoric conceals reality, hawks browbeat doves. In such a charged atmosphere, pacifism pales, becomes ineffectual. But one last word—it takes more courage for leaders to pull back from the brink than to plunge into the unknown. For death, be it murder or suicide, is an acknowledged act of cowardice, of surrendering control instead of exercising it.