He was king, finally. He bought one, got galores free. In the feast of choices laid before him by a Globus or a Big Bazaar, he has never been more full. 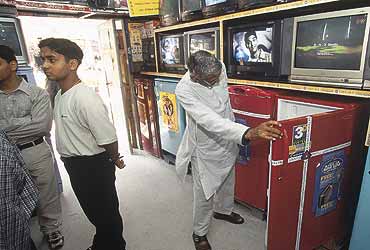 outlookindia.com
-0001-11-30T00:00:00+0553
Sanjay Rai, vice-president (sales and marketing) of the Oberoi Hotels, refuses to accept it as a knee-jerk reaction. He calls it the new marketing mantra redefining the world of consumer privilege. Sops, sops and many more sops. And like elsewhere in the world, Indian consumers of all shapes, sizes and categories are reaping value benefits like never before.

Rai says it does not matter whether this is due to the slump in the tourism market following 9/11. What matters is the bottomline and the news is that the Rs 1,200-crore Oberoi group is expecting a 30 per cent rise in reservations following newly-designed packages which guarantee the moon (additional rooms, free stay for children, food coupons, movies of choice, unlimited use of gym, sauna and so on). And timings? March 15 to September 15 and again from December 1 to May 30—virtually the entire year.

The tourism industry is not alone. Special packages are the norm of the day for everyone, from beverages and tobacco companies to white goods to transportation and communication to clothing and even healthcare. The consumer is faced with a feast of choices. And strangely enough, both consumers and companies are winners in this game.

Consider the colour TV sector, which was slumped in gloom this summer but did roaring business in the post-9/11 period with sales touching the 2-million unit mark. "Prices went down and almost all companies offered freebies (Samsung's Phod Ke Dekho, BPL's Entertainment Dhamaka, LG 5000 crore Dhamaka, etc). And the fact that we sold so much in the post-festival season reflects peoples' purchasing mentality. This means 13.7 per cent growth in unit terms," says Pradeep Tognata, marketing director of LG Electronics.

The lesson for win-win is simple and clear. Focus on discounts and more discounts and rope in as many small customers as possible to grow in volumes. And it is happening across the country. Peep into the supermalls—Globus and Subhiksa in Chennai, Bombay Bazaar, Shopper's Stop, Globus and Crossroads in Mumbai, RPG's Giant in Hyderabad, Margin Free in Thiruvananthapuram or Big Bazaar in Kolkata. The message is the same: sell at prices well below MRP. "There is a large customer segment looking for affordable and trendy clothing," says Ved Prakash Arya, CEO of Globus, which has plans to invest an estimated Rs 150 crore to expand the chain (from the current four to 25) over the next five years. And it is not just Globus which is expanding. The RPG group opened its first discount store, Giant, this year and plans another 15 over the next five years. Big Bazaar plans to open five stores in Mumbai and Gurgaon by March 2002. "We are doing this because there is no let-up in the spending spree. Competitive pricing always helps," remarks Raghu Pillai, chief executive, RPG Enterprises.

Says Namrata Rana, managing director, Futurescape, a Mumbai-based company that says it specialises in customer relationship marketing (CRM): "Domestic as well as international retailers have been able to crack the coded definition of the Great Indian Middle Class and are, expectedly, cashing in on these customer-centered gains, which are as high as 15 to 40 per cent of both sales and profits." Agrees Pradip Gidwani, managing director of Australian beer major Foster's, which has been able to make a dent in the Indian beer market through continued aggressive promotions ever since its launch last year: "Promos (meal combo-s, How To Speak Australian evenings, Formula One screenings, Wizards of Oz, and Fostralia) are an effective way to achieve quick acceptance and consumer loyalty."

Discounts are waylaying you everywhere. If you are driving from Delhi to Agra, you may end up avoiding the customary roadside eating joints and check in at a Bharat Petroleum outlet in Mathura! Surprised? A McDonald outlet that guarantees a free meal for every purchase made at the outlet.Eat one meal, see the Taj and pick up one for dinner on return.

If that is interesting fare from the American fast food giant, sample this one from TNT India, subsidiary of the Dutch courier multinational, which increased its business substantially this year following a whole range of special schems, like Scholarpack for students. "We've always noticed that recessionary trends encourage people to look for alternate business. In India, with reduced offers and loyalty campaigns, we increased our business by more than 15-20 per cent in a depressed year," says Ajay Kaul, country marketing director. Agrees Harit Nagpal, marketing director of Essar Cellphones: "Attractive rates are the call of the day. Look at free-time calls, various pay options and increased SMS messaging and you will understand the pattern of demand. And this will only grow in the coming months."

According to analysts, long-term trends reflect a growth of 4-5 per cent in consumption expenditure patterns in real terms. This, economists feel, could continue if there is a good monsoon which will lead to improved agricultural income and increased rural consumption, which has seen relatively slow growth. Consumer goods production went up by 5.4 per cent between April and August 2001. Though this was less than last year's 7.6 per cent, there has been a strong pick-up in sales in sectors like automobiles and white goods in subsequent months (October-December), indicating a 12 per cent growth.

Another encouraging note is that the annual per capita consumption expenditure increased at a cumulative annual growth rate (CAGR) of 14.5 per cent between 1994 and 2001. As a result, economists claim that the purchasing spree is not just limited within the middle and low-rung but also includes the top-end consumer. "The fact that we were encouraged to launch a top-end card in India in these times shows that the consumer's purchasing power is not locked in a time warp. Like other segments, the top-end is also growing at a steady pace," says K.L. Muralidhara, country manager, American Express TRS, which launched its Platinum card in India in August and claims to have already built up a "substantial" membership list.

The market is alive and kicking, and the pandered consumer is the king. Finally.