The Compass Is Veering Off Merit 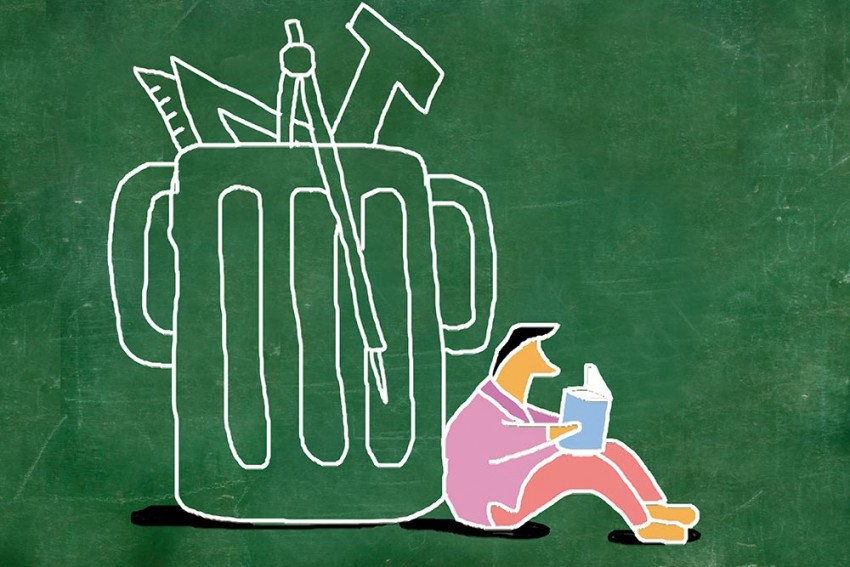 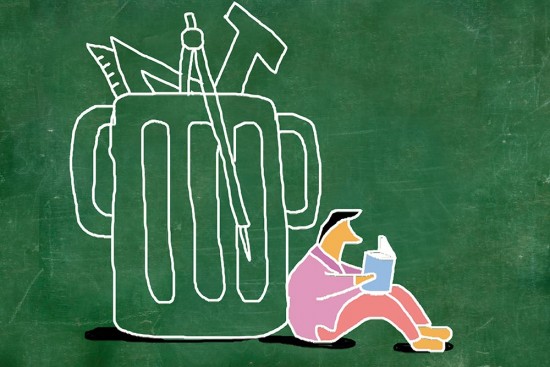 The Conundrum In Tamarind Land

The hero in the film is a rowdy and tells the girl, “So you’re an engineer? Great.” Pat comes the response from the heroine, an IT graduate looking for a job: “What is great about that? In Tamil Nadu, who isn’t an engineer?” It’s a striking scene from Kaadhalum Kadandhu Pogum (Love Also Passes), a 2016 romantic comedy-drama.

The retort is one of the most truthful observations that has come from Tamil cinema in recent years. The southern state is actually teeming with engineers. Many completed their course by clearing all exams, but most are still battling arrears, while a sizeable number dropped out midway. According to a study, Tamil Nadu has more than a lakh of unemployed engineers—and their numbers are only growing.

“When you have more than two lakh engineering seats offered by 546 colleges, what can you expect?” asks E. Balaguruswamy, former vice-chancellor of Anna University that affiliates these colleges and issues degree certificates in its name. “In the last two years, more than a lakh seats have remained vacant and a dozen colleges have applied for closure. Engineering colleges were allowed to be opened like grocery shops. They turned seats into a commodity.”

With supply far outstripping demand, no less than 28 institutes in the state have applied to the All India Council for Technical Education (AICTE) for winding up, while a dozen others have asked for the closure of specific courses and 154 have sought to reduce the intake of students from 2017. The closure will take away more than 10,000 seats and the reduced intake will mean 30,000 seats less in the kitty this year. Six more colleges were placed on zero admission category after an AICTE inspection found deficiencies: poor infrastructure and lack of qualified teachers. The AICTE has permitted over 200 engineering colleges across the country to close down, according to Anil Sahasra­budhe, chairman of the statutory body for higher education. “Most of them are from Telangana, Tamil Nadu, Karnataka and Maharashtra. We expect the state governments to do a proper assessment about the demand before giving their NOC for new colleges,” he tells Outlook.

Deemed universities, which have their own syllabus and admission process, have shown better results. For instance, this year more than two lakh students applied for 7,000 seats in VIT Univer­sity, says its chancellor G. Viswanathan. “Other deemed universities in the state, too, got a good response. This proves institutes that offer quality education continue to be in demand in spite of the surplus seats available in colleges affiliated to Anna University. The answer lies in improving your infrastructure and the quality of your faculty,” he tells Outlook. “Deemed varsities were engineering colleges in the beginning and only by ensuring continuous quality they could evolve into universities.” 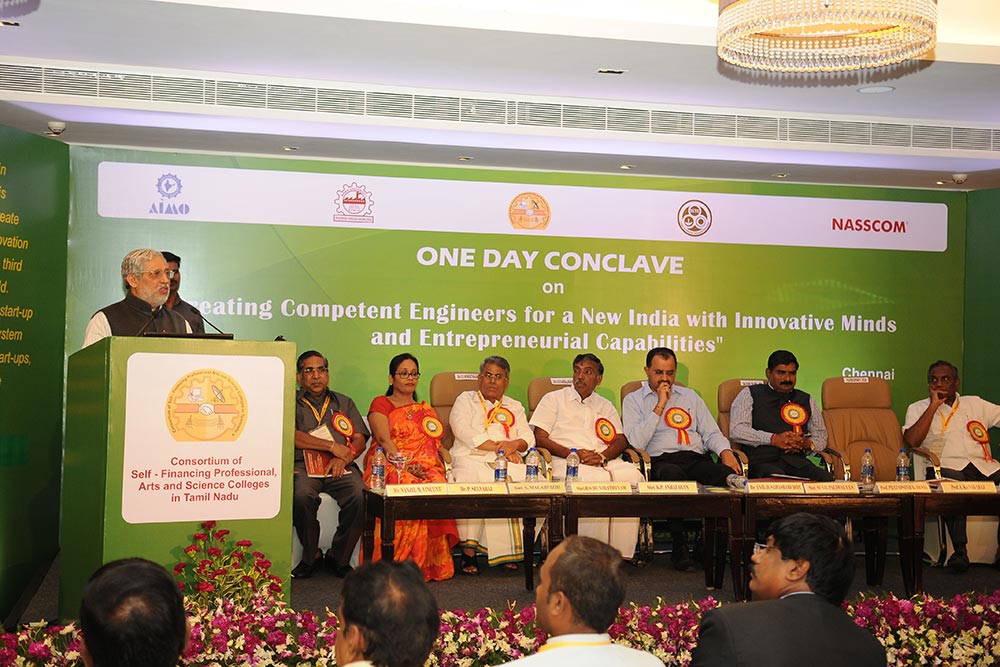 AICTE’s Anil Sahasrabudhe at a professional college meet in Chennai

The deemed universities are better off as they have no restrictions on admissions and on fees and also attract students from outside the states.

Too many players jumped into the engineering pool during the last decade, hoping to ride the IT wave and make a fast buck. “The IT boom in the south created the need for more engineering graduates and you saw an explosion of self-financing engineering colleges in Tamil Nadu, Karna­taka and unified Andhra Pradesh,” points out R.S. Munirathinam, president of consortium of self-financing colleges in Tamil Nadu. “Barring those colleges located around cities, others started languishing as they could not retain the faculty, which in turn turned away fresh students. Many colleges also failed to pay the promised salaries to the faculty which led to further attrition.”

An AICTE inspection found infrastructure to be poor and a lack of qualified teachers. It has permitted 200 colleges to wind up.

The surplus of colleges and seats has affected even those institutions with good performance record. “We have been consistently ranked among the top ten private engineering colleges by Anna University,” points out Nanjil M. Vincent, chairman of Vince Christian College of Engineering. “We could fill only 60 per cent of our seats last year.” With more colleges and deemed varsities coming up near Chennai and big cities of Coimbatore, Salem, Madurai and Tiruchy, students are less attrac­ted to Vince campus at Nagercoil deep south of the state. Yet, a good network of schools in three down-state districts of Kanyakumari, Tirunelveli and Tuticorin enables Vince to woo bright students. “Yet we need to fill up all our seats to be viable,” adds Vincent.

The spurt in colleges is attributed to a political decision by the DMK government in 2006 to open up engineering admissions to everyone who passed the plus-two exams. “It was a quid pro quo,” says Balaguruswamy. “The government allowed more engineering colleges (after taking a huge cut from the promoters) with the promise of increasing the student pool for admissions.” The same government also dumbed down school education with a common syllabus that made a pass in class ten and twelve a breeze. And scoring 100 per cent in maths and science became common, just to paint a rosy picture of high literacy in the state.

The result: engineering colleges were populated by a poor crop of students who could not grapple with basic high-school maths and science during their first year. “Almost 90 per cent of the students from state board schools failed in the first year and we had to hold bridge courses during the summer vacation,” recalls a professor of Anna University. Compounding the problem was the lack of qualified teachers. The AICTE’s surprise visits found fourth-year engineering students teaching juniors, says R. Balamurugan, regional officer of the council. “No wonder many students piled up arrears or simply failed to take the semester exams.”

Even those who completed the courses were found to be wanting when interviewed for jobs. “Only the top 20 per cent of students, that too from 30 colleges and 10 deemed universities, could make it during the campus interviews,” points out K. Dinesh Kumar, who heads talent acquisition for IT giant Infosys. “I, as a student of a private engineering college from Chennai, was shocked to see the sudden drop in quality of those coming out. Most of them were unemployable.” To him, these students had failed to learn at both high school but college level. “You cannot blame them. For, at the college level, not only does the syllabus get outdated fast, even the teachers do.” Kumar’s solution: train teachers in latest skills with short certification programmes. “Everyone from the principals to HoDs and teachers need to be re-equipped as what they teach gets overtaken by the time a student comes out of the college.”

The ministry of human resources dev­elopment held a study, which revealed that only three lakh out of an 8 lakh engineers the country churns out every year get employed in related jobs. Out of them, only one lakh command the core industry skill set. In the IT industry, points out NASSCOM senior director K. Purushothaman, 60 per cent of the jobs require new skills, which are the new currency. “And job profiles keep changing faster as technology changes. ‘Am I there?’ is what engineering colleges need to keep asking themselves if they have to remain in contention,” says the official with the trade association of Indian IT and BPO industry.

Realising the shrinking talent pool, the industry is also coming up with new methods. “Rather than hire and train graduates, we are intervening at the college level to train students on specific skills so they can be deployed to the right job when they pass,” reveals Wipro’s V. Viswanathan, who heads the company’s campus hiring. “We are also resorting to contest-based hiring, getting students to take online contests in coding and programming.” At the prodding of the industry, Anna University has finally agreed to revamp its curriculum and promised refresher courses for faculty.

Sahasrabudhe suggests another way: have adjunct faculty in colleges, with engineers from industry giving classes for at least a few weeks. “The companies should release them on full pay; the colleges should provide them the facilities,” he says. “In return, colleges should depute their lecturers to spend a couple of months in related industry to learn what their requirements are and how the courses can be upgraded.”

Of 8 lakh engineers India produces every year, only 3 lakh get into related jobs. Of them, only 1 lakh have core industry skills.

During a conclave of private engineering colleges in Chennai, All India Manu­facturers’ Association president K.E. Raghunathan offered three solutions. One, to launch a website in which engineering colleges offer to solve problems from industry, government or society (at a cost). Two, every company should identify five candidates in their second semester and let them intern in their factories and absorb them on graduation. Finally, pool a fund to upgrade skills of state board students so they can compete globally. “Unless we do these, many graduates would prefer to become Ola cab drivers as they can earn more there,” says Raghunanthan, also an industrialist. “I am ashamed to admit, it but my office boy earns Rs12,000 a month whereas an engineering graduate trainee gets only Rs 6,000.”

Another contentious issue has been the fee charged by the private colleges. In Tamil Nadu, 65 per cent of the seats of the private colleges have to be handed over to the government to be distributed under a single-window scheme as per marks scored in the plus-two exams. The tuition fee for these seats cannot exceed Rs 40,000 a year. The remaining 35 per cent attract a tuition fee of Rs 70,000, but since they come under the management quota they are up for grabs depending on the capitation fee a student can cough up. The managem­ents also make up with separate fee for hostel, canteen, library and other heads.

VIT’s Viswanathan says one cannot stop them from collecting capitation fee, as there are 14 NOCs that engineering colleges and deemed universities have to procure from government departments. Unless they pay bribes, the certificates won’t come, he claims. “Similarly, they have to take care of politicians at the state level and officials at AICTE for getting their recognition,” he points out. “When you create conditions for education to be run only on bribery, the ultimate sufferers will be the students. In the process, what values do we teach these young minds?”

According to Jaya Engineering College chairman A. Kanagaraj, the present tuition fee will make it difficult to attract good faculty. “From this year, we have to pay salaries as per the seventh pay commission norms. But the tuition fee has remained static for five years,” he points out. “Unless they let us double it for the management quota and also marginally increase it for the government quota, more college would become economically unviable and shut shop next year.”

Amidst all the cacophony the real stakeholder—the student—goes unnoticed. The surfeit of engineers in the job market has resulted in many doing jobs unsuited to their domain knowledge. At a small industrial unit in Ambattur in West Chennai, R. Prakash, a mechanical engineer, is busy fabricating automobile parts used in foundries and lathes. “This is the job of an ITI diploma holder and not that of an engineering graduate,” he shrugs. “But this job pays me Rs 15,000 a month even if it requires me to spend nearly 12 hours a day at the factory. Otherwise, I would be unemployed like many of my fellow graduates.”

“The Real Concern Is To Ensure High Quality Of Education”