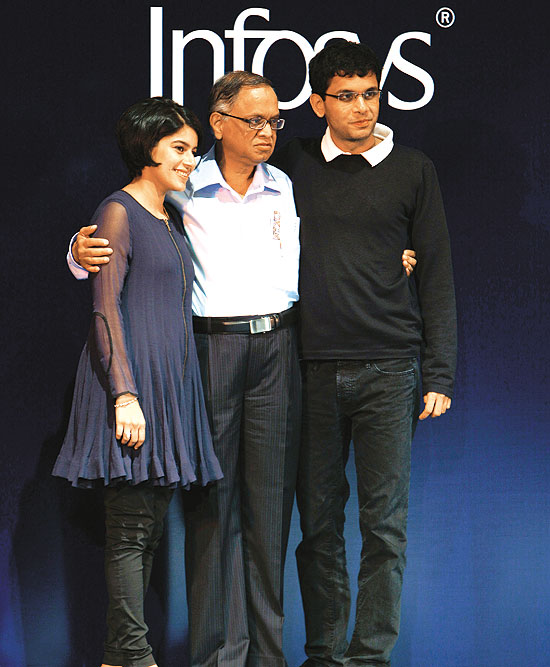 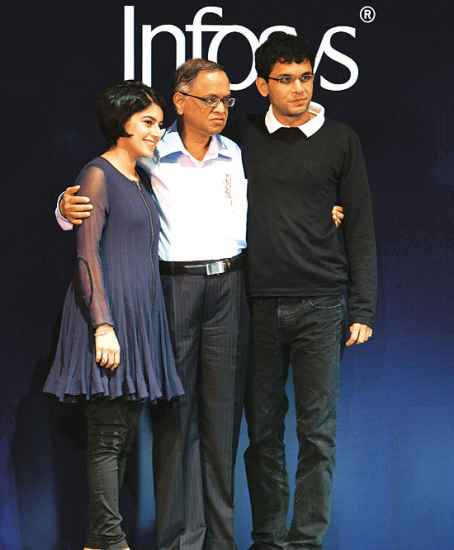 Twelve top guns have quit Infosys in roughly the last one year. Some of prominent ones:

Is the promised revival of IT bellwether Infosys coming soon? That’s the big question on everybody’s mind as India’s second largest software service firm loses top executives with unbelievable regularity. In just about a year and a half, 12 top Infoscions have bowed out, with B.G. Srinivas, a key president at Infy, one of the latest to leave the company. Like many of the others, he too is set to join “a small company”, one of his former colleagues informs rather unkindly.

Indeed, since the moment N.R. Naray­a­namurthy rose like the Phoenix to take back charge a year ago, it’s been gloves off rough-and-tumble action at Infosys. The blowback for turning his back on Infy’s ideal—meritocracy—and reappearing with son Rohan in tow didn’t help Murthy personally. But if you thought the war of personalities settled with Mur­thy’s staying on and his critics quitting, you were wrong. Now the consternation is deteriorating into a general air of hopelessness around Infosys itself. The apparently poor man-managem­ent only sticks out like a sore thumb within the larger picture of Infosys failing to send clear signals of a turnaround.

“An 18 per cent attrition rate shows that the rank and file is also moving out,” says a former top executive, among the many who left in a huff last year. To make a point, he underlines that it’s the “good employees” who always leave first. The fact that all is not well in this showcase company is clear from the fact that despite two salary hikes last year, there was little impact on employee morale. “Leaders are being questioned at the company. Younger people lose faith when this happens,” says the former executive, who held several key positions at Infosys for over a decade. He pauses a moment to reflect, sadly, on how Nara­ya­namurthy has “changed”. “Everybody has weaknesses and Murthy’s seem to be family and founders,” he says, indicating the unease with young Rohan Murthy and current CEO S.D. Shibulal’s efforts, especially his much touted Infosys 3.0, unveiled a couple of years ago. Planned as a vision strategy for future growth, it yielded no results and was one of the key reasons for nrn’s return.

Two distinct camps have emerged since last June at Infosys, both demonstrating what’s at stake for the company. One, consisting of professionals current and former, resoundingly criticises Murthy for returning and blames him for Inf­o­sys’s lacklustre performance. The camp’s protagonists argue that a series of warnings by analysts since the second year of Shibulal’s term went ignored. The other camp, largely voices within Infosys, says the company is being “attacked unfairly”: Infy made improvements and is “trying to change”, which is never easy, they say.

There is also the issue that unlike his pre­decessors, Shibulal was never a Nar­a­yanamurthy favourite. Already, Shibulal has demonstrated a willingness to give up his position before his January 2015 retirement, a clear concession to critics. A crack team of professionals is working on finding a new CEO, though it seems unlikely it’ll happen anytime soon.

Also, within the company, there is an argument that the Infosys culture of full-disclosure is going against it. “This step-wise disclosure of every possible move in the appointment of a CEO is contributing to the bad news...it’s very unfair,” says one official. Kiran Mazu­m­dar Shaw, an independent director at Infosys, declined to comment other than saying the company is following due process in the appointment of a new CEO.

Rohan Murthy’s entry in nrn’s office has also not gone well with Infy’s power centres. “Infosys is entering a phase of intense restructuring. Among the professionals at the company, there are misgivings that it is turning into a typical family managed concern,” says Prof A.K. Jain, a specialist in corporate governance who teaches at IIM Lucknow. He says misco­mmunication appears to be one bugbear but the larger problem is Infosys’s inability to declare its new business model. “That uncertainty has a more emphatic role in fuelling the unease,” says Jain.

Both sides agree that Infosys needs “som­ething new” to revive its fortunes but a $7 billion revenue giant facing slow dem­and after the global financial crisis and weak client spending isn’t easily tur­ned around. Infosys has slowed compared to rivals tcs and hcl in recent quarters and that hurts Infoscions’ pride, not to mention investors.

Amidst the hoopla, Murthy’s whip-cra­cking statement at a recent analysts’ conference betrayed his anger against his own people, including those who resi­g­ned. “We had to take tough decisions as most of them were drawing high salaries and not adding value,” Murthy said.

The bitterness is inexplicable unless, as one leading industry expert and ex-Infosys hand points out, “they ignored problems for many years and started addressing them since revenues are now at stake”. The executive says suc­cession-pla­nning was never a priority, even in the mid-2000s. “This explains the top level exits better than personality clashes or global financial troubles,” he says.

Another source involved in the re-configuring of Infosys agrees with Murthy’s diagnosis at the investors’ meet. “It’s true that a large number of people are leaving, but look where they’ve gone. They’ve all moved to lower positions. It tells you something, doesn’t it?”

If anything, the remarks and counter- remarks show how awful things are at Infosys now. Once the middle-class dream, the company is meandering tow­ards an uncertain future, banking on that favourite of all corporate strokes of genius—outside talent. Names like Vishal Sikka, former sap honcho, are doing the rounds, as is Nandan Nilekani, regarded as the “quintessential” Infosys boss (he declined comment on the issue).

In truth, most Info executives who have quit are now either entrepreneurs or VCs in their own right. Others are working, a little ironically, in fields Info­sys itself wants to flourish in. Like Ashok Vem­uri, who headed Infosys America, is now iGate CEO. Basab Pradhan headed Infy’s sales globally and is now CEO and MD of Cliqr, a cloud-focussed company. Though the company has demurred a little, signalling ‘bread-and-butter’ of late, it is clear to analysts that the behemoth will soon have to update its two decades old business model.

“The exits don’t shake the fact that we have improved margins and bagged large contracts recently,” an Infosys sou­rce says. This is also true, as is the fact that a 1.6 lakh-employee giant has a massive pool of professionals to pick from.