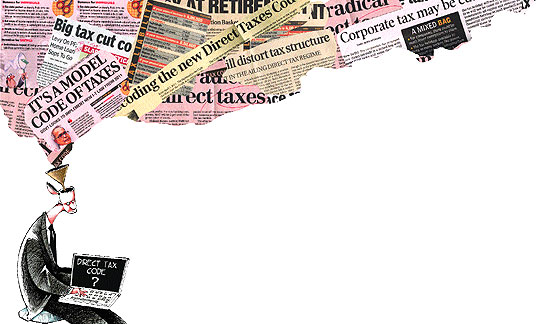 “This is the resting point for tax rates. It cannot go any lower than this. The elimination of exemptions will foster a virtuous tax regime and will help us move from a consumption-led system to an investment-led one.”

“The removal of exemptions on housing loans and those on HRA and LTA will hurt the salaried class most. But for the reduction in rate and increase in savings exemption limit, there are no gains for them.”

“EET could result in many retirees seeing an increase in their tax burdens. Given this demographic profile of the affected persons, this provision is possibly avoidable.”

“Shifting from book profits to ‘gross assets’ for mat and change in calculation of taxable business income would require more clarity and could pose challenges for assessees and administrators during regular assessments.”

“The Code is unlikely to have positive impact on cross-border transactions. The income of non-residents from indirect transfers of capital assets situated in India has been made taxable here. Rules governing residency of foreign firms in India deserve a relook—this is at variance with the global outlook India seeks to espouse.”

One always approaches taxes with a certain amount of trepidation. But the new draft Direct Tax Code (to kick off in 2011) got a rapturous welcome. After perusing the fine print, however, many tax experts and companies have started to realise what lies beyond the sugar-coated pill. Here’s what some of the key provisions look like under the microscope.

The code has slashed individual income-tax rates, but will salaried people gain if exemptions are removed?

With income-tax rates to touch the lowest levels ever, salary-earners in the medium- to high-income brackets will get substantial relief. No change for those earning above Rs 25 lakh annually, except for the removal of surcharge announced in the budget. Low-income group gets minimal gains though. The exemption level on savings has been increased from Rs 1 lakh to Rs 3 lakh, which will leave more money in the hands of most people.

The Fringe Benefit Tax (FBT) is history but every benefit and perk is now considered income. Will that hurt salaried people?

Although the exemption limit on savings has been raised, repayment of the principal amount of housing loan and five-year fixed deposits in banks would not be eligible for claiming the enhanced deduction of Rs 3 lakh. Also, LTA and medical reimbursements (tax-free up to Rs 15,000 at present) become fully taxable now. However, medical insurance premium of up to Rs 15,000 and treatment for some specified diseases of up to Rs 40,000 will remain tax-free.

Does the Exempt-Exempt-Taxation (EET) regimen act as a disincentive to long-term savings?

DTC: “Under the EET method of taxation, contributions and accumulation are free from any tax incidence till such time as they remain invested—all withdrawals at any time will be taxed at the applicable personal marginal rate of tax.”

A large part of personal savings in India goes to schemes like Public Provident Fund and EPF—they are a source of tax-free income. The code makes withdrawal from these schemes taxable. Although worldwide, such schemes are taxed once in the lifetime of the investment earnings, this could hurt retired people and discourage savings in such long-term schemes.

Corporate tax rate has been reduced but tax holidays will go and the minimum alternate tax (MAT) will be a burden on all companies. Are there no gains for India Inc?

DTC: “MAT to be calculated with reference to the ‘value of the gross assets’ instead of book profits. The rate of mat will be 0.25 per cent for banking companies and two per cent for all other companies.”

Reduction of corporate tax rate to 25 per cent for both domestic and foreign companies is likely to benefit all companies. However, the introduction of mat on the value of assets (instead of book profits) is likely to hurt loss-making or sick companies and start-ups. But it will also make every company, irrespective of whether it is profitable or not, pay some tax. Also, Dividend Distribution Tax will continue, which means the portion of profits distributed by the company would continue to be taxed in the hands of the corporate. Capital gains norms have also been changed. Removing the concept of short-term and long-term capital gains, the code taxes capital gains on sale of investment assets by including them as part of a firm’s business income while losses can be carried forward indefinitely.

There are new concepts in the code but are they likely to pose more difficulties than benefits?

DTC: “The General Anti-Avoidance Rule (GAAR) will be invoked if the main purpose of an arrangement is to obtain a tax benefit; if it has been entered into, or carried out, in a manner not normally employed for bona fide business purposes.”

The tax authority will have powers to target a transaction if it feels that the entities seek to avoid paying taxes. This is likely to increase the complexity of tax structure and may lead to litigation. Another new concept introduced by the code is of “Treaty Override” under which the latest laws and rules will prevail for all treaties signed by the country. Since many treaties were formulated much earlier, this might increase tax liability and litigations. This could mean huge work for tax administrators, considering that India has tax treaties with over 70 countries.

By Arindam Mukherjee with Arti Sharma

For We Did This